After being selected with the 53rd overall pick of the 2014 draft out of Fresno State, the hype train immediately began on Davante Adams. After all, a 6’1”, 215 lb receiver who was historically productive in college on an Aaron Rodgers offense?

Some of this hype was quelled by the Packers’ recent resigning of Randall Cobb, but there’s little doubt that Adams is the best wide receiver “handcuff” in fantasy football this year. He’s been called the ‘MVP’ of OTAs by coach Mike McCarthy and even Aaron Rodgers has made his voice heard about Adams’ potential. Let’s explore why there’s so much excitement around this young pass catcher. 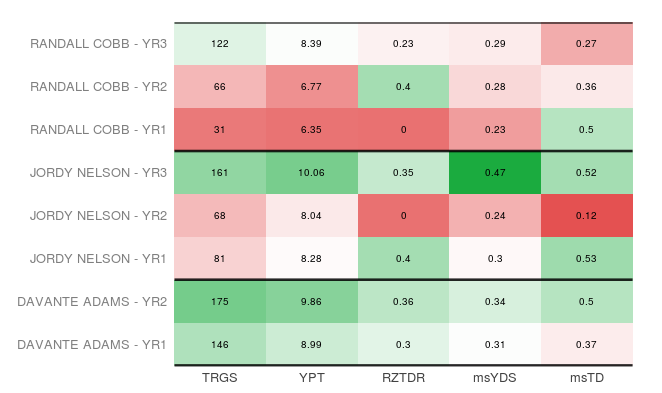 His college production was better than Randall Cobb’s and was better than Nelson’s as a sophomore. His young breakout age is very impressive: it is also a very good predictor of next-level success.

If that isn’t enough to convince you, take a look at his comparable players when he was coming out of Fresno State, courtesy of RotoViz.com:

Quite an impressive list of prospects, especially those with both a track record of NFL success and players who are just starting to break out. It is clear that Adams’ college production and measurables are of WR1 caliber.

Right now, Adams is being drafted as WR39. We know if he is ticketed for a full-time roll in an Aaron Rodgers offense, he’s going to be good. But how good, exactly?

Because of the myriad of injuries over the course of the careers of Randall Cobb, Greg Jennings, and Jordy Nelson (not to mention Rodgers missing nearly half the season in 2013), let us simply look at the per-game averages of some of his top receivers:

Very impressive considering the large sample size: anyone hovering around 7 targets per game is almost guaranteed a WR2 or better finish when Rodgers is throwing them the ball. Those receivers’ average extrapolation to a full season would finish with about 116 targets, which would’ve ranked a mere 28th in the NFL last season.

That’s what gives his receivers such a safe floor- if they’re averaging a WR2 finish on WR3 targets, imagine if those targets were to bump for any reason. And there’s not a large chance they go down- can Green Bay really get more efficient than 1st in offense on 24th in plays run? If Adams gets his shot, he’s going to have a WR2 floor.

Injury Histories of Nelson and Cobb

Last year was the first year since 2009 that both of Aaron Rodgers’ top targets stayed healthy. Nelson and Cobb have had seasons where they missed or were ineffective in multiple games. Cobb had a nasty fibula fracture in 2013 that cost him all but six regular season games. He was healthy last season and is only going to be 25 years old when the season starts.

Jordy Nelson’s injury history is far more concerning. With hamstring injuries ruining a promising 2012, a knee surgery to repair nerve damage in 2013, and a clean-up operation on his hip this offseason, the 30-year old Nelson has a bit more injury risk than meets the eye.

Adams’ huge upside is obviously dependent on a significant injury to one of these two players, but clearly that isn’t out of the question.