As a whole, the league’s passing numbers continue to rise: 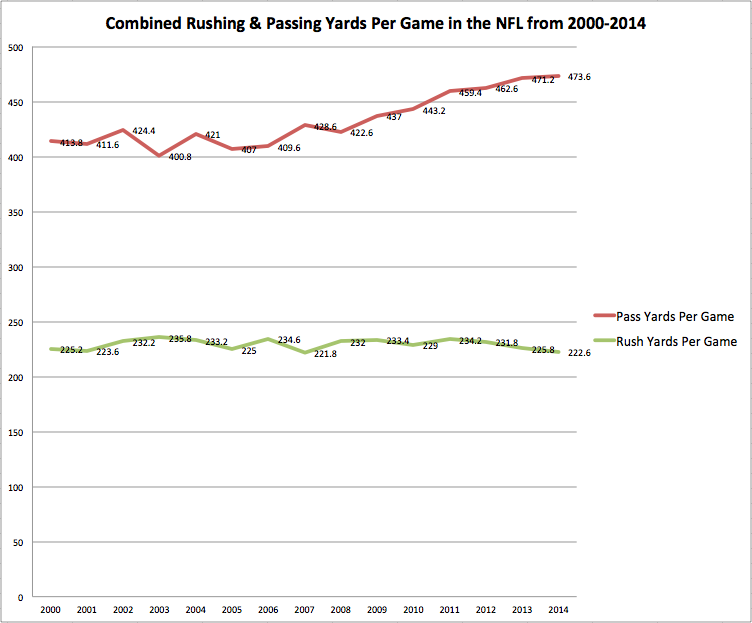 Last year, we set the peak numbers at 80 receptions, 1,400 receiving yards, and 8 touchdowns. This threshold gives us a sample size of 53. The list includes all wide receivers to meet the requirements since 1990 and was generated by Pro-Football-Reference.com:

The average age of this group is 27.06. Here’s a distribution graph of their ages:


The obvious peak is from age 25 to 30 – 79.2% of the players fall within this margin. Jerry Rice owns three of the four seasons that take place after the age of 30. Rice also didn’t rely as much on athleticism as many other wide receivers so he is somewhat of an anomaly. This is evidence that you should expect some decline from a receiver after his age 30 season.

To improve our sample size, we’ll drop receiving yards to 1,300. By lowering the yardage threshold, we broadened our sample size to 85. The players are listed in the table below. This list was generated by Pro-Football-Reference.com:

The average age jumped up to 27.36 years old. Here is the distribution graph:


The distribution spread out a little more but the clear peak of 25 to 30 remains in tact – 74.1% of the peak seasons fall within that threshold. As the “peak” statistics are reduced, older wide receivers who aren’t as explosive are able to meet the criteria. Perhaps this means that when selecting a wide receiver in the early rounds, you want someone that falls within 25 and 29 years of age.

Going into his age 30 season, there are some concerns with taking Calvin Johnson as one of the top five receivers. Still, he should have at least one quality season left. Jordy Nelson also turns 30, maybe leading the Packers to take a little off his plate in favor of youngster Davante Adams.

There are a lot of very good young wide receivers – guys like Odell Beckham Jr. (23), DeAndre Hopkins (23), and Mike Evans (22). This article may push you away from them – history would say it should. Just keep in mind that these guys could be special, meaning that no rules apply.

However, when it comes to selecting Odell Beckham (23) or Dez Bryant (27) at the end of the 1st round – this article would suggest you take the proven star who is entering his peak.