The old adage goes “there’s more than one way to skin a cat.” While I have very little interest in finding out the context of that proverb, it definitely applies to fantasy football.

All strategies work… if you select the right players. However, depending on the flow of your draft, there may be times where you want to play it safe and go for a high floor, or take a falling player with huge upside but an injury risk. Today, I’m going to look at what the Rotoviz Similarity Scores say about the floors and ceilings of various players Want a safe WR3 or flex if you’re drafting with the Zero RB strategy? Need a WR1 ceiling at a WR2/3 price after drafting two RBs? Look no further, we are going to delve into the “late” early rounds and see which WRs with an fourth-round ADP fit your draft strategy.

As one of Chip Kelly’s first hand-picked shiny new toys, J-Matt was a popular sleeper in drafts last year. But as Nick Foles took deep shots to Jeremy Maclin, Matthews was left fighting for scraps. That all changed when Mark Sanchez came aboard: 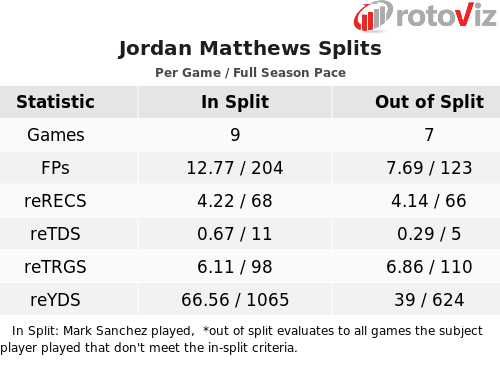 As we can see, Mathews is a WR1/2 when a more risk-averse quarterback is throwing to him. Standing a stout 6’3″ and 212lbs, he’s a slot dynamo a la early-career Marques Colston. We all remember how much Sam Bradford loved his slot receivers (the “Amendola game”), and even if Sanchez wins the QB battle Matthews is in good shape. Even as a rookie, he finished as WR24 on the 40th-most targets. Let’s look at the projection:

I think this is a safe, decent projection. The number one receiver in Chip Kelly’s offense finished as WR12 in 2013 (Jackson) and WR9 in 2014 (Maclin). While Matthews wins on different areas of the field than they do, Matthews should be a shoo-in for 80 catches. Considering how many plays the Eagles run (1st in total offensive plays in 2014), there will be ample opportunity for Matthews to break out. He’s my favorite of the bunch due to his huge ceiling.

Father time has finally caught up to one of the great ones of our generation and I’m having a tough time making excuses for his 2014. Only 936 yards? He finished 6th in the league in targets.  Three touchdowns due to bad QB play? Teammate DeAndre Hopkins had twice as many on 19 less targets. Seeing a bunch of double coverage? The Texans switch up their wide receivers’ sides all the time. Now 34 years old, what do the projections say?

Indeed, his age and previous season really does him more harm than good here. The only silver lining is he’s playing with a top-two fantasy quarterback and his efficiency can only go up. And with Gore, Hilton, Allen, Fleener and Co. ready to step into passing game duty, his efficiency better go up because he isn’t going to be force-fed the targets he was in 2014. I don’t think I’ll end up with him on any teams. Target him if he makes you feel comfortable, but he’s got both one of the lowest ceilings and floors of the guys on this list.

Another year of hoping an “X” receiver steps up huge for the Patriots (Lloyd, Thompkins, Dobson) and another year Edelman leads the team in WR targets. Even though Brandon LaFell arose from the depths of Carolina into a prominent role, Edelman still caught 92 balls for 972 yards. By now, we know what Julian Edelman is- a small slot receiver whose touchdown ceiling is six and is unlikely to have more than 1,100 receiving yards. But as long as we can get those 90+ catches, he’s going to be a PPR asset.

The projections absolutely love Edelman, and as long as Brady is at the helm things will be okay. In the (unlikely) event that Brady’s suspension stays at four games, Edelman will become a bit more risky. Gronk will always be red zone king and LaFell proved to be the real deal last year, but Edelman is going to be the Patriot’s safety blanket- just like he was in the Super Bowl when he saw 10 touches. I’m still buying. You know what you’re getting with Julian Edelman.

I wrote in depth about Allen in my Post-Hype All Stars piece, and I’m still a believer in taking him in the fourth round. Stevie Johnson’s presence has started to worry me a bit more of late, but Allen still finished 25th in targets despite missing two games.

The projections don’t really love Allen (his “Median” and “High” are pretty comparable to Edelman’s “Low” and “Median”, respectively), and there’s an argument to be made for some pessimism. He’s not especially fast (4.71 40), and last year was a definite cause for concern. But I think it is just as likely that Allen helps fill in the gap left by Antonio Gates’ four-game ban as much as/if not more than Ladarius Green. If he starts hot, he can keep that momentum, and Rivers’ trust, going for the whole season. I think he’s fairly priced with a decent floor and a medium/high ceiling.

Tate really proved just how good he was in 2014. He was a great complement to Calvin Johnson when Megatron was healthy, but take a look at his splits when Calvin missed games (try to keep your jaw off the floor):

Calvin is fully healthy again but it appeared that his floor was a higher aDOT Julian Edelman, no? The projections agree:

With a big floor and a big ceiling, Tate is arguably the most intriguing fourth-round wideout available. His biggest detriment is his lack of touchdown-scoring upside, but if he can repeat last years’ efficiency he’s going to blow his WR21 ADP away.