Although many fantasy football owners like me want to fancy themselves as “objective”, we are simply human – emotion plays into our decision making more than we’d like to admit. This is admittedly a mistake, but opportunity arises from these errors.

For the uninformed, post-hype sleepers are players who came into the previous season with lots of hype, hoopla, and costly ADP who ended up disappointing owners to various degrees. Many people will be scared of drafting these players next year even if their health, opportunity, and situation are no different from their previous season. Using MyFantasyLeague’s ADP, let’s see which running backs fit the bill for 2016:

To be completely honest, there aren’t many positive takeaways from Melvin Gordon’s much-ballyhooed 2015 rookie season. He averaged an anemic 3.5 yards per carry and didn’t score a single touchdown. To make matters worse, he had microfracture surgery in the offseason. But what about the good news? He is fully healthy and participated in minicamp, and his situation hasn’t really changed at all since last year.

We know the roles pretty well on the Chargers offense: Keenan Allen as the chain-mover, Antonio Gates as the red-zone maven, Danny Woodhead as the passing-down back, and Travis Benjamin as the field-stretcher. Gordon is going to be the early-down and possibly goal-line back this season, and it’s worth noting that he still caught 33 passes last year.

He is heavily discounted in drafts, and with Keenan Allen back healthy, there will be many more fantasy points to be had in the offense:

The Packers, long a bastion of fantasy football brilliance, descended to mediocrity in 2015. Much of it seemed to be a chain reaction when Jordy Nelson got hurt: Cobb isn’t a number one receiver, Davante Adams wasn’t ready, the offensive line collapsed, and Eddie Lacy was hurt and ineffective when healthy. He finished as the PPR RB32 while making James Starks look like a Pro Bowler in comparison.

However, the Packers have deservingly earned the benefit of the doubt in the minds of fake footballers. Nelson is back, the offensive line is healthy, and 2015 is behind them. Last season was the first time he had finished outside the top eight RBs, and looks to be finally serious about his body composition: 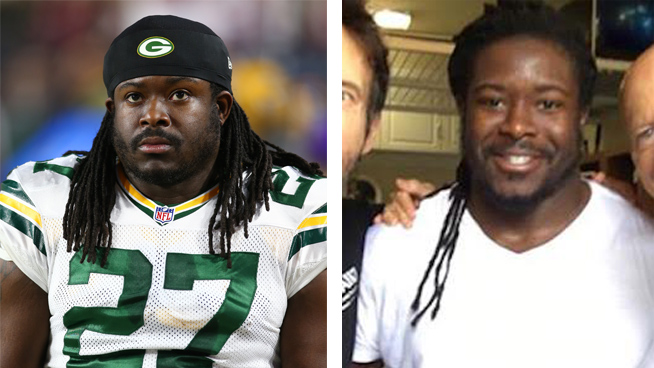 Rashad Jennings’ positional ADP was a pretty minimal drop, but his overall ADP dropped two rounds. This may be because more people are drafting wide receivers early, but I included him in this article because his ADP makes zero sense compared to last year. In other words, Jennings played 16 games for the first time in his career and set career highs in attempts, yards, receiving yards, and receiving touchdowns… and his ADP drops two rounds?

There is no denying that the Giants’ run game was a mess last year, culminating in an Orleans Darkwa free agent phenomenon. But Andre Williams may not make the team, Shane Vereen is a passing-down back, and hyped-rookie Paul Perkins is all potential at this point. Giants beat writers have been predicting all offseason that Jennings is going to be the workhorse. Take a look what Jennings did to close out 2015: