Below are the average age, number of receptions, receiving yards, and touchdowns for WR1s or the top 12 PPR receivers from this past season. Let’s begin by comparing the production from the top 12 receivers over the past two seasons:

While the efficiency reduced in this past season, targets and receptions are rising. As a whole, the league’s passing statistics continue to rise: 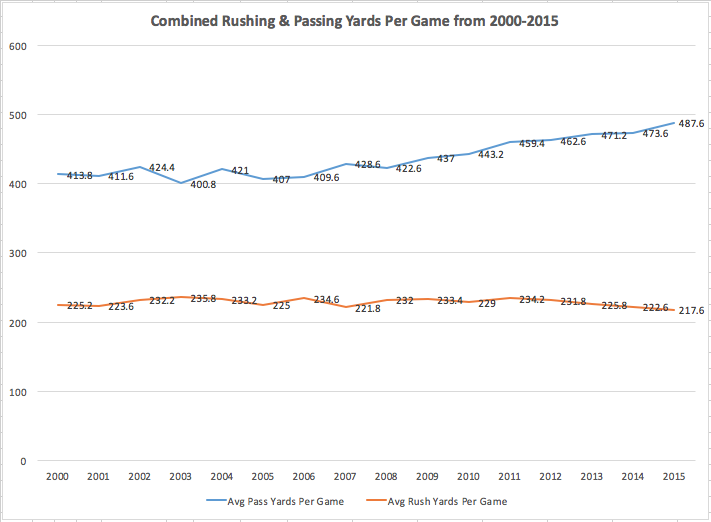 In past years we set the peak numbers at 80 receptions, 1,400 receiving yards, and 8 touchdowns. This year, we are aiming to increase the sample size. To do this, we are lowering the peak numbers to 80 receptions, 1,300 receiving yards, and 8 touchdowns. This threshold gives us a sample size of 91. The list includes all wide receivers to meet the requirements since 1990 and was generated by Pro-Football-Reference.com:

The average age of this group is 27.23. Here’s a distribution graph of their ages:


The obvious peak is from age 25 to 29 – 63.7% of the players fall within this margin. This is evidence that decline starts for most receivers after their age 30 season.

To improve our sample size again, we’ll drop receiving yards to 1,200 and touchdowns to seven. By lowering the yardage and touchdown thresholds, we broadened our sample size to 150. The players are listed in the table below. This list was generated by Pro-Football-Reference.com:

The average age inched up to 27.41 years old. Here is the distribution graph:

While the after age 30 seasons aren’t frequent, they are diluted by the ageless Jerry Rice. Rice reached our threshold ten times in his historic career – including his age 30-34 and age 40 seasons. Amazingly, Rice accounts for 21.7% of the peak seasons occurring after age 30. While Larry Fitzgerald added his name to this list at 32 years old last season, I’d continue to bet against wide receivers over the age of 30.

When selecting early round wide receivers, who are expected to carry your fantasy team, I’d aim to draft wide receivers who are 29 or younger.

League winners Antonio Brown (28) and Julio Jones (27) are still squarely in their prime.

I would not be afraid of drafting young studs: Keenan Allen (24), DeAndre Hopkins (24), Odell Beckham (24), Jarvis Landry (24), Sammy Watkins (23), Mike Evans (23), Allen Robinson (23), Brandin Cooks (23), and Amari Cooper (22). The fact they accomplished impressive production at such a young age is a good indicator for their futures. Despite not being in their primes according to this study, they can still be building blocks for your fantasy team.