Have Faith In Hilton

Many fantasy owners, including myself, thought 2015 would be another beautiful step in the Andrew Luck-TY Hilton passing game love affair. With increasing yardage totals every year of his career culminating in a fantastic 82-1,345-7 line in 2014, a WR1 finish was seemingly a tease of what 2015 was to come.

But Hilton failed to live up to his WR9 2015 ADP as Andrew Luck got hurt while the Colts suffered through a lost season. But recency bias is getting in the way of what should be a 2016 continuation of the Luck-Hilton connection that hit the pause button in 2015, and his current WR15 ADP is a real value.

How Much Of A Difference Does Andrew Luck Actually Make To The Colts Offense?

Considering Hilton still cleared 1,000 yards receiving last year, does Andrew Luck really make that big of a difference to the Colts’ passing offense or is it just a fabricated narrative? Let’s use the wonderful Rotoviz Apps to find out: 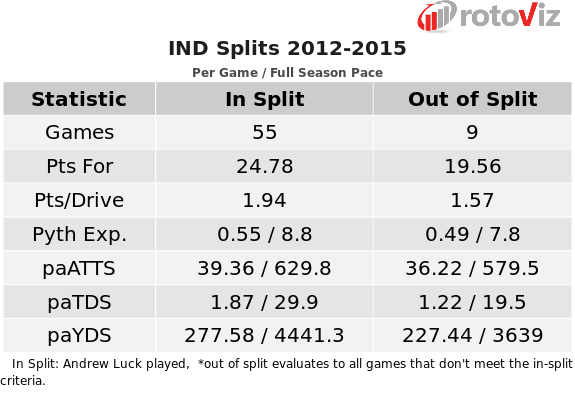 Dating back to Andrew Luck’s rookie year, it is clear that his absence makes an absolutely massive difference in passing efficiency. While only attempting three more pass attempts per game with him in the lineup, they are on pace for 50 more yards per game and over 10 more passing touchdowns per season with Luck in the lineup. More fantasy points for everyone.

What About Luck’s Effect on Hilton Himself?

2015 was the first time that Hilton had played a game without Andrew Luck throwing him the ball. We know Luck makes a huge difference to the Colts’ offense, but what about to just Hilton? Let’s look since Hilton’s 2013 season as he was more comfortable in his cleats as a sophomore:

Clearly, catching passes from the rotting carcass of Matt Hasselbeck, “quarterbacks” Charlie Whitehurst and Josh Freeman (no, seriously) and a sprinkling of Ryan Lindley hurt Hilton’s 2015. Frankly, it was a miracle he cleared the 1,000 yard plateau.

How Does His 2016 Opportunity Look?

There are currently 14 wide receivers going in front of Hilton. Because targets are the lifeblood of fantasy points, what kind of target numbers can we expect for Hilton?

The Colts have averaged nearly 630 pass attempts per season when Luck plays. That would have ranked 5th in the NFL last season, while players with higher ADP than Hilton like Mike Evans and Alshon Jeffrey’s teams passed the 22nd and 25th most times in the NFL, respectively. Considering the Ryan Fitzpatrick debacle and age, it wouldn’t be crazy to take Hilton over Brandon Marshall either.

With obvious talent, a great quarterback, and an inexpensive price tag (compared to 2015), Hilton is a clear value in 2016.