From 2011-2013, Vincent Jackson never finished worse than WR16. In 2014, Jackson had fluky touchdown regression – scoring just two touchdowns on 140 targets but still finished as WR33. Now drafted as WR53, Jackson has become a value in fantasy drafts. With just Mike Evans ahead of him in the pecking order for targets, Jackson is a lock to be involved in the offense.

Mohamed Sanu joined the Falcons and suddenly doesn’t have as much competition for targets. Sanu proved capable of producing when AJ Green was out of the lineup. 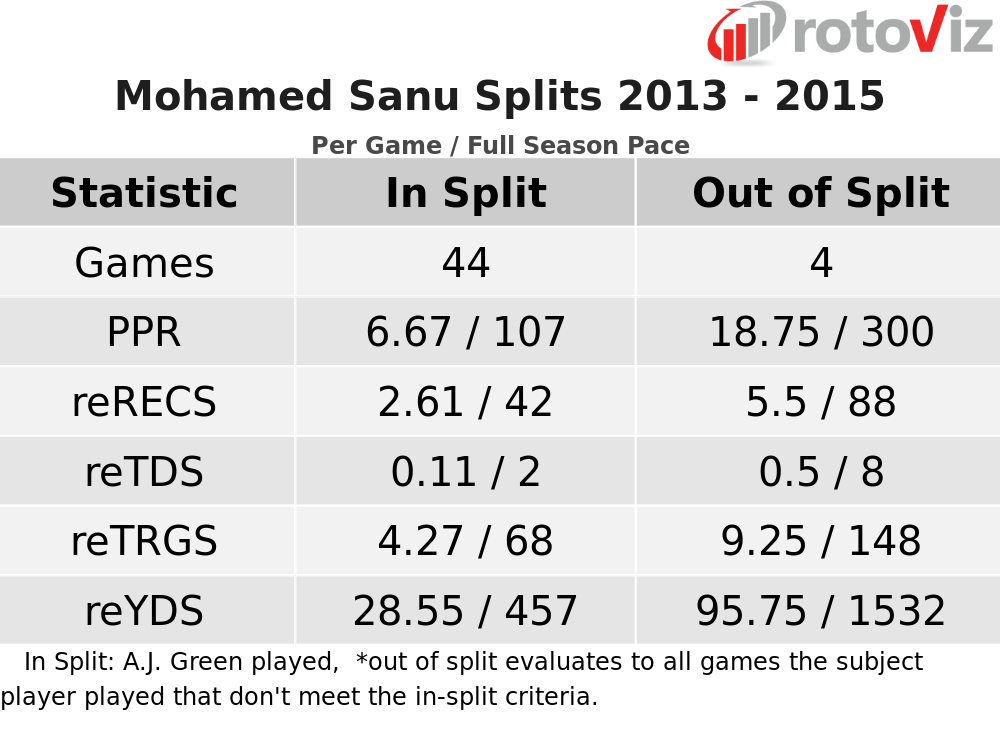 With just Julio Jones ahead of him in the pecking order for targets, Sanu is a nice sleeper for late round production.

.@AtlantaFalcons GM Thomas Dimitroff: "Sanu is a legitimate #2 for us, is a great compliment to Julio Jones."

With injuries to Tyler Eifert and Brandon LaFell, Tyler Boyd has become increasingly interesting. Boyd appears to be second in line for targets and has impressive college production. Here is how he compares to former Bengals Mohamed Sanu and Marvin Jones.

Boyd’s college production indicates that he could make an immediate NFL impact and he has the opportunity to do so.

While Bruce Ellington hasn’t made much of an impact so far in his NFL career, he is one of the league’s best athletes.

Comparable to Odell Beckham Jr in terms of athleticism, Ellington lacks production. This year it’s clear that Chip Kelly has plans to use him. Ellington has been called a “standout” during joint practices and “seems ready for a big season.”

Without Andre Johnson and Coby Fleener, the Colts have a lot of targets up for grabs. The Colts have adopted a three wide receiver base offense and Dorsett looks like the “most improved” player.

Chud says Phillip Dorsett needs to be "big-time playmaker" this year, and "he has that ability." #Colts

A former first round pick, Dorsett could surprise a lot of people this season.

Few have made noise in preseason quite like Tajae Sharpe. Sharpe caught all of his six targets for 68 yards in the first half. It appears that he has already locked up a starting role for the Titans. Suddenly Sharpe has become an interesting late round flier.

#Titans WR Tajae Sharpe is a name you may want to know for fantasy (and real life). The rookie from UMass has done nothing but impress.