In competitive fantasy football leagues like Apex’s, identifying breakout players is a crucial element to winning. This is the reason that August is dedicated to pumping out “sleeper” and “upside” articles – if you can find the player who was valued as a 14th round pick but performed as a 2nd round pick, you will have added significant value to your team. Here are a few of the players who broke out in 2016:

On average, Matt Ryan was selected as the 18th quarterback off the board. Only Aaron Rodgers scored more fantasy points than Matt Ryan this season. We’ve seen Ryan perform as a reliable QB1 before, but never with the upside he showed this season. Over the past five seasons, Ryan averaged 27.2 passing touchdowns per 16 games, this year Ryan threw 38 passing touchdowns. Ryan’s impressive numbers are likely to regress with Kyle Shanahan likely to accept a head coaching position, but with his current weapons he must be taken seriously for fantasy drafts next summer.

At times, this one was extremely hard to see coming. With the Dolphins drafting Kenyan Drake and declaring Arian Foster the starter, it appeared that the Dolphins didn’t see much in Jay Ajayi. After being a healthy scratch in Week 1, Ajayi looked extremely unlikely to make an impact. When Foster got injured and promptly retired, there were opportunities for touches. Ajayi took advantage and never looked back.

While it was difficult to see coming, there is evidence that Ajayi is an impressive prospect. Ajayi dominated at Boise State, generating a college dominator rating of 41.3% (89th percentile) and a college target share of 12.4% (86th percentile). At 6-foot 221 pounds, he scored 123.5 on the Nike SPARQ test (79th percentile). Despite long-term health concerns about his knee, Ajayi’s college profile indicated that he was a player worth keeping an eye on.

Davante Adams went from the being the league’s least efficient receiver in 2015 to the 9th highest scoring wide receiver in 2016. With Jordy Nelson injured, Adams was supposed to be the breakout guy in 2015. When he faltered, it led to many emotional biases against him – which led to Adams being significantly undervalued and essentially left for dead (with many banging the table for Jeff Janis to receive more playing time).

Many forget that Adams was playing through injures in 2015 and that breakouts sometimes take place in a wide receiver’s 3rd season. There were signs that a breakout was possible with Adams – he was another impressive prospect. 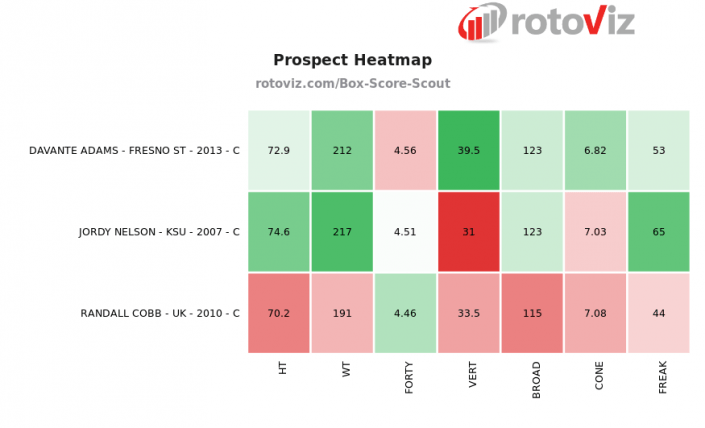 When it comes to college production, Adams was dominant.

With this impressive profile and Aaron Rodgers as his starting quarterback, we shouldn’t be surprised that he broke out. Although his 2015 season made it difficult to trust Adams, we must remember that young players can turn their careers around.