The Peak Age for an NFL Wide Receiver

Below are the average age, number of receptions, receiving yards, and touchdowns for WR1s or the top 12 PPR receivers from this past season. Let’s begin by comparing the production from the top 12 receivers this season to the past three seasons:

Compared to past seasons, the top 12 wide receivers’ production was down by any measure. Is this a concern for the future: will wide receivers’ value continue to decrease? 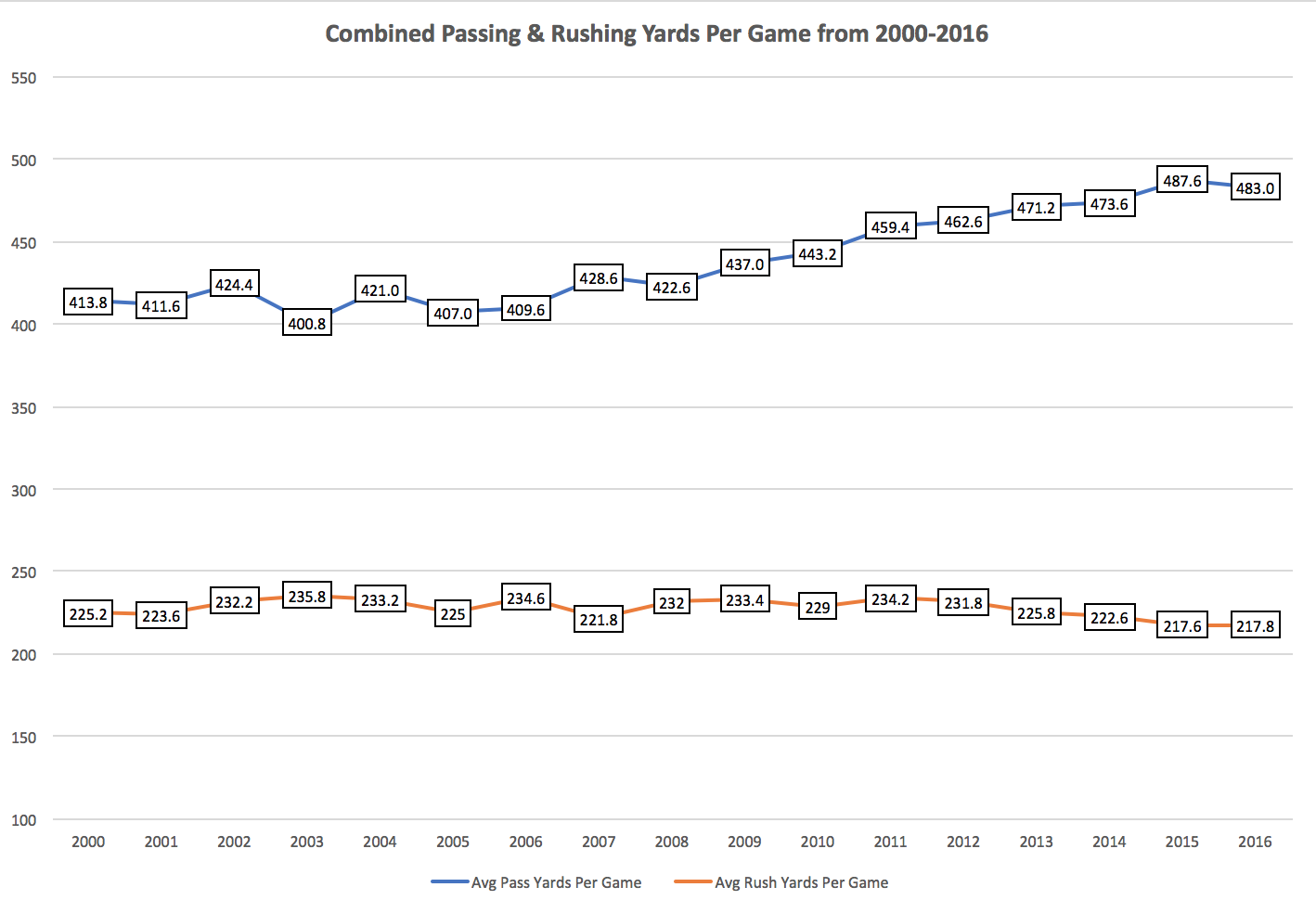 While there was a bit of a dip in pass yards per game in 2016, it’s clear that the league is trending towards passing as frequently as ever. With passing on the rise, receiver production seems bound to regress to the mean.

We will define a peak season as a wide receiver with at least 80 receptions, 1,200 receiving yards, and six touchdowns. We will include each receiver to meet those requirements since 2000. The sample size at this threshold is 128 players. This list was generated by Pro-Football-Reference.com:

The average age of this group is 27.35. Here’s a distribution graph of their ages:


It looks like the peak of a wide receiver’s career is from 25 to 29 years old – 59.4% of the peak seasons fall within this range. It looks like receivers decline at 30 years old, with the wheels falling off at 33 years old. The amazing Jerry Rice notched the only peak season at 40 years old.

When selecting wide receivers in the early rounds, who are expected to carry your fantasy team, I’d aim to draft wide receivers who are 29 or younger.

This study is not favorable for many aging veterans. Their ages next season are in parenthesis: Larry Fitzgerald (34), Brandon Marshall (33), Jordy Nelson (32), and Ted Ginn (32).

Julian Edelman, DeSean Jackson, and Pierre Garcon will be 31 in 2017 – heading closer to the imminent decline. Demaryius Thomas and Emmanuel Sanders will turn 30, although their quarterback play is likely a bigger concern.

It’s scary to think that Odell Beckham Jr. (25) and Mike Evans (24) are just entering their primes and could still be improving.  Despite the effects of bad quarterback play, DeAndre Hopkins (25) and Allen Robinson (24) are still extremely young.

Sammy Watkins (24), Michael Thomas (24), Brandin Cooks (24), Stefon Diggs (24), and Amari Cooper (23) are still at a solid age for production and potential improvement. While they still haven’t entered their primes according to the study, the fact they accomplished impressive production at such a young age is a good indicator for their futures.

While I appreciate the effort, there are some serious problems with the data you are using and your analysis.

First, much of it is simply incorrect. For instance, Jerry Rice’s best season came when he was 33 not 40 (https://www.pro-football-reference.com/players/R/RiceJe00.htm). If you are going to include only half a player’s career you should not include them at all. You should either include a players entire career, or limit it to players who entered after 2000. Calvin Johnson’s best season was in 2012 and it is not included.

More importantly though, for PEAK season (singular best season) you should only include each player once. What you are showing is not peak season but instead the age of players who meet their threshold, many of them being the same. Your sample size should be much smaller something like 30 players.

Third, you should not include players who are still active in the league, as it cannot yet be know which season will be their best as they could do better next year.

You should instead title this something along the lines of, ages of WR who achieved X Y Z since 2000.

First and foremost, thanks for reading.

I think there’s a misunderstanding about the intention of the article. While I agree that perhaps it could be beneficial to exclude players who entered the league after 2000, including them increases the sample size. And you could make the same argument to exclude active players because they haven’t played their entire careers and haven’t had the opportunity to produce at an old age. That would leave us with far less data to draw conclusions from. If we want to continue to nitpick, we could also argue that it’s unfair to compare WRs who played in the early 2000’s as the league wasn’t as pass-heavy.

Calvin Johnson’s best season was not included because he did not hit the six touchdown threshold. I acknowledge that should be corrected but at the time this article was written ProFootballReference did not have the ability to sort by fantasy points so I was forced to determine arbitrary thresholds. To correct the err, this year’s study was organized by fantasy points.

The aim of this study was not to find the singular best season – which would seem to be an insignificant study if conclusions were attempted to be drawn from a small sample size of just 30 players. It seems that it would almost be random. For instance, Jerry Rice’s best season was at 33 – that doesn’t mean that other wide receivers are most likely to have their best season at 33. The aim of this study was to find out at what age wide receivers are most likely to produce or decline. A sample size of 128 players gives us enough data to draw some viable conclusions.