Home / Fantasy Football Studies / Who Should I Draft: Jordan Howard or DeMarco Murray?

Who Should I Draft: Jordan Howard or DeMarco Murray?

In yet another installment of our head-to-head series, we’ll pit the promising sophomore Jordan Howard against the resurgent DeMarco Murray. 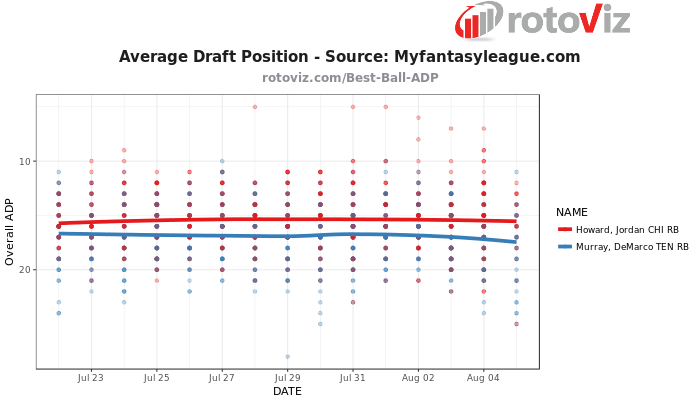 Using the RotoViz Best Ball App, we can see that users have very slightly preferred Jordan Howard over DeMarco Murray recently. Let’s see if that holds up to some analysis. Like last time, let’s go category by category.

Jordan Howard did not miss a single game for health concerns last season, while DeMarco stayed healthy the entire year as well. DeMarco unfairly gets labeled as “injury prone” – he has only missed three games the past four seasons combined – but his age and style of play may take its toll soon. He is already dealing with a hamstring tweak.

This is often tied to how good your offense is and how much goal-line work you get. Howard had six rushing touchdowns last year, and all were inside the 10-yard line. DeMarco had nine rushing scores, and three as a receiver last year. Pro Football Focus has both teams’ offensive lines rated in the top-5 for this upcoming season, so let’s break the tie by deciding who will be in scoring position more often. A bottom-5 QB situation with Cameron Meredith as your top receiving weapon, or Marcus Mariota and an absolutely loaded Titans offense?

Both backs are relatively true workhorses. Howard saw 16.8 carries per game last year, and that was after seeing a combined 12 the first two games he played. Murray saw 18.3 carries per game, while promising rookie Derrick Henry only saw 110 carries total. While Derrick Henry is going to be the Titans’ workhorse next year or in 2019, the Titans will run Murray into the ground as long as he is healthy and effective. Jeremy Langford and Kadeem Carey have proven to be flashes in the pan, while Benny Cunningham is a passing-down option only.

How did each player catch the ball last year?

Clearly, Murray was superior in every way. But will that continue in 2017? The Titans didn’t add anyone to their backfield, while Derrick Henry is still a work-in-progress in pass protection.

Many are still wary of DeMarco Murray after his disastrous 2015 in Philadelphia, but his stats every other season range from above-average to sublime. A running back of his age and style is honestly due for a significant injury, but these things are very tough to predict.

There is a much murkier track record for players like Jordan Howard. First of all, Howard is a relatively average prospect. Secondly, we’ve seen a startling amount of rookie RBs with promising seasons flop as a sophomore for a variety of reasons (Trent Richardson, Doug Martin, Todd Gurley). Howard doesn’t have much wiggle room on an offense that is below average at nearly every position except offensive line. It’s concerning that he’s a minus in the passing game on a team that is expected to be playing from behind frequently.

Taking everything into account, Murray seems like both the safer pick and the ceiling pick. He is always involved in the passing game, is on a better offense, and has a more proven track record. Howard could surprise again and finish as a top rusher, but he has much more working against him than Murray. I believe Murray’s ADP should be higher than Howard’s.