This will be Part I of my eight-part series going division by division and analyzing draft trends, specifically looking at players that are overvalued at their ADP, undervalued, and some late round upside guys to fill your bench with.

The NFC West is in the midst of a power shift: gone are the days of Seahawk dominance and 49er/Ram mediocrity. Let’s take a look at some draft trends for fantasy purposes:

Brandin Cooks, WR, LAR: After being drafted near the end of the 2nd round in 2017, owners had relatively lofty expectations for Brandin Cooks. After all, he cost the Patriots a 1st round pick, Julian Edelman was out of the picture, and he was the best deep threat Tom Brady had since Randy Moss. The result? A solid, if not spectacular 65/1,082/7 line en route to a WR15 finish.

His situation got much worse this offseason in a crowded Rams receiving corps with Robert Woods, Cooper Kupp, young TE’s, and Todd Gurley commanding targets. In fact, 85% of the 2017 targets are returning in 2018 – leaving only 70 for Cooks. It is likely he plays more of the Sammy Watkins “clearout” role to spread the field and is targeted sparingly. Indeed, Watkins averaged a mere 4.6 targets, 2.6 catches and 39 yards per game last year.

Cooks could easily surpass those numbers, but are you willing to bet a late 3rd/early 4th round pick on it? With higher floor and ceiling plays like Josh Gordon, Demaryius Thomas, Golden Tate, JuJu Smith-Schuster, etc. going after Cooks, I’m going to pass.

Jerick McKinnon, RB, SF: Although McKinnon’s ADP is currently in the middle of the 3rd round, I think he’s actually a steal there. Despite barely seeing the field until Week 5 due to Dalvin Cook’s injury and sharing time with Latavius Murray, McKinnon turned in an RB17 finish in 2017. Take a look at what he did from Week 5 on: 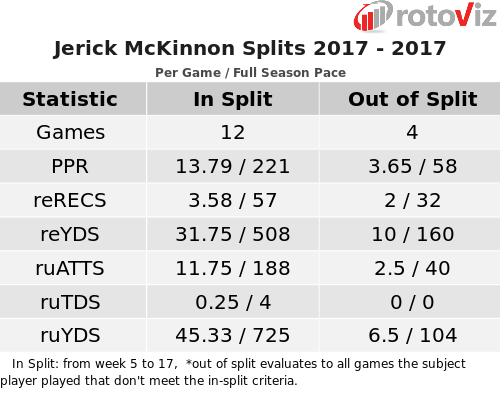 If he continued that pace for a full season, it would be good enough to be RB11. The best part? He’s going to have that opportunity this year, as he was hand-selected by RB Whisperer Kyle Shanahan to be the workhorse in San Francisco. To see why this is such an exciting development, take a look at running backs that have operated under Shanahan while he was an offensive coordinator/head coach:

Aside for a couple lost years in Washington and Cleveland, Shanahan has been elite at turning relatively unknown backs into fantasy commodities. Keep in mind he set up the system that allowed Arian Foster to dominate in Houston as well. With a seemingly RB10 or better floor and an RB16 pricetag, McKinnon is a steal in the 3rd round.

Tyler Lockett, WR, SEA: Russell Wilson finished last year as the overall QB1 with a whopping 47 fantasy points separating him and 2nd place (Cam Newton). Gone are Paul Richardson, Jimmy Graham, Luke Willson, and Jermaine Kearse – so in the very likely event that Wilson finishes as a top-tier QB again, someone besides Doug Baldwin is going to have to be the recipient of a good portion of that production right?

Enter post-hype sleeper Tyler Lockett. After a promising rookie year and coming with a top-70 ADP price tag in 2016, Lockett is going to be a candidate for 90+ targets with room for much more. He’s finally healthy, and his only real target competition is an old and currently recovering Brandon Marshall – who isn’t even a lock for the final roster.

He can be had in the 13th round, and at worst should be an upside bye-week filler.

George Kittle, TE, SF: A slightly-hyped rookie out of Iowa, Kittle had an excellent first season for a tight end. He finished 2nd on San Francisco in receiving yards and had the 2nd most catches among rookie tight ends in a legendary class. With up-and-coming Jimmy Garoppolo and the proven tutelage of Kyle Shanahan, Kittle looks primed for a 2nd-year leap.

The 49ers did not add much target competition, so the opportunity is there for low-end TE1 production. Tight end is very top-heavy this year, so if you miss out on one of the top-tier guys, Kittle is an excellent middle-round option. Take a look at his athleticism courtesy of our friends at PlayerProfiler.com: