This article is intended to update fantasy owners on what has transpired during the NFL free agency period. We’ve written about how we expect each player to be impacted by their new team.

Last year’s WR2 in Apex leagues, Tyreek Hill is currently suspended indefinitely from all Chiefs’ team activities. It’s looking likely that Hill, at the very least will miss a significant portion of the season but his NFL career may be over. The Chiefs concern was highlighted by their selection of speedster Mecole Hardman in the second round.

If Hill misses significant time, Travis Kelce and Sammy Watkins become even more valuable. Kelce led all tight ends in scoring last season and was only outscored by eight wide receivers. Providing such a big advantage at the tight end position, Kelce has entered first-round consideration in redraft leagues.

Sammy Watkins would quickly become the Chiefs top wide receiver, which is an extremely valuable opportunity with Patrick Mahomes at quarterback. Despite some injury woes, Watkins was extremely efficient last season. 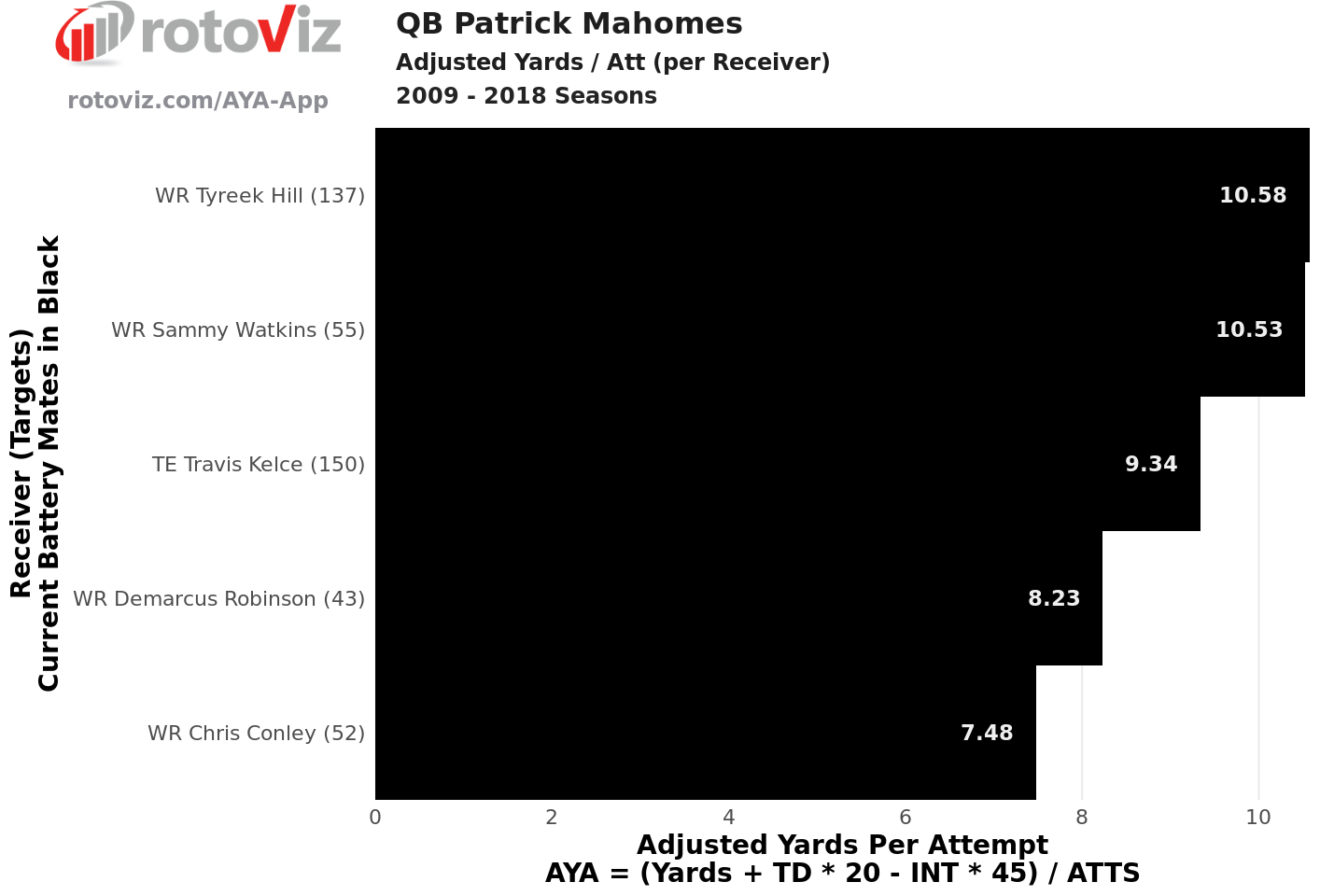 Catching passes from arguably the game’s best quarterback, Watkins will likely be a WR1 when Tyreek Hill is not playing.

Likely the best tight end to ever play the game of football has announced his retirement. In addition to the rest of his achievements, Gronk leads all of Tom Brady’s pass catchers with at least 100 targets in adjusted yards per attempt.

Drafters should expect Brady’s production to regress as he has averaged five fantasy points fewer per game with Gronk out. There will be plenty of opportunities for rookie wide receiver N’Keal Harry.

The NFL will surely miss one of the greatest and most entertaining players to ever play the game.

Odell Beckham Jr. to the Browns

One of the more exciting moves this offseason is Odell Beckham Jr. to the Browns. Odell has been handicapped by Eli Manning’s diminishing ability for years now and will join the ascending Baker Mayfield.

Averaging 10.5 targets per game for his career, Odell is likely to see a modest decrease in volume – but with the passes coming from Baker Mayfield the value of each target will be much higher. Odell remains an upper-echelon WR1 in fantasy leagues.

Antonio Brown to the Raiders

The Antonio Brown saga has finally ended with a trade to the Raiders. Brown could easily lead the NFL in targets as the Raiders have very little in terms of competition. The transition, however, is not the most fantasy friendly.

With eight more pass attempts per game, Ben Roethlisberger was outproducing Derek Carr in every category – including efficiency. Brown could still finish as fantasy’s top receiver, but will likely need to produce based on quantity, rather than quality.

Nick Foles to the Jaguars

Nick Foles has proven to be more than capable when inserted into a good offense. The issue is, that’s not the case for the Jaguars. Built to rely on the power running game, the Jaguars don’t have the dominant pass catchers necessary for an average quarterback to thrive. He could help Leonard Fournette by providing the offense with some stability.

Jordan Howard to the Eagles

This move looks likely to have a smaller impact after the Eagles drafted Miles Sanders in the 2nd round. Sanders combines the ability to run inside with pass-game chops. He offers three-down ability and the Eagles spent valuable draft capital to acquire him. The addition spells trouble for Jordan Howard’s fantasy appeal.

Joe Flacco to the Broncos

Flacco may be serviceable enough for Courtland Sutton and DaeSean Hamilton to produce – but I would hesitate to call him anything close to a boost for their 2019 prospects.