Dak Prescott: Your 2019 Late Round Quarterback

“Late Round QB” is no longer a strategy for the fantasy football elite – in fact, in 4-point per passing TD leagues that start only one QB, quarterback ADP has dropped significantly the past decade.

But picking the right QB as the rounds creep into the double digits can still be a huge difference maker – the top 3 QBs from 2018 (Patrick Mahomes, Matt Ryan, and Ben Roethlisberger) all had ADPs in the 10th round. This year, I’m arguing for Dak Prescott as your late-round QB target.

Dak Prescott’s ADP right now is QB20 in the 12th round, according to Fantasy Football Calculator. This is eyebrow-raising considering Dak’s history:

It was no secret the passing game struggled in Dallas for the early part of the 2018 season. But the midseason trade for Amari Cooper changed everything: 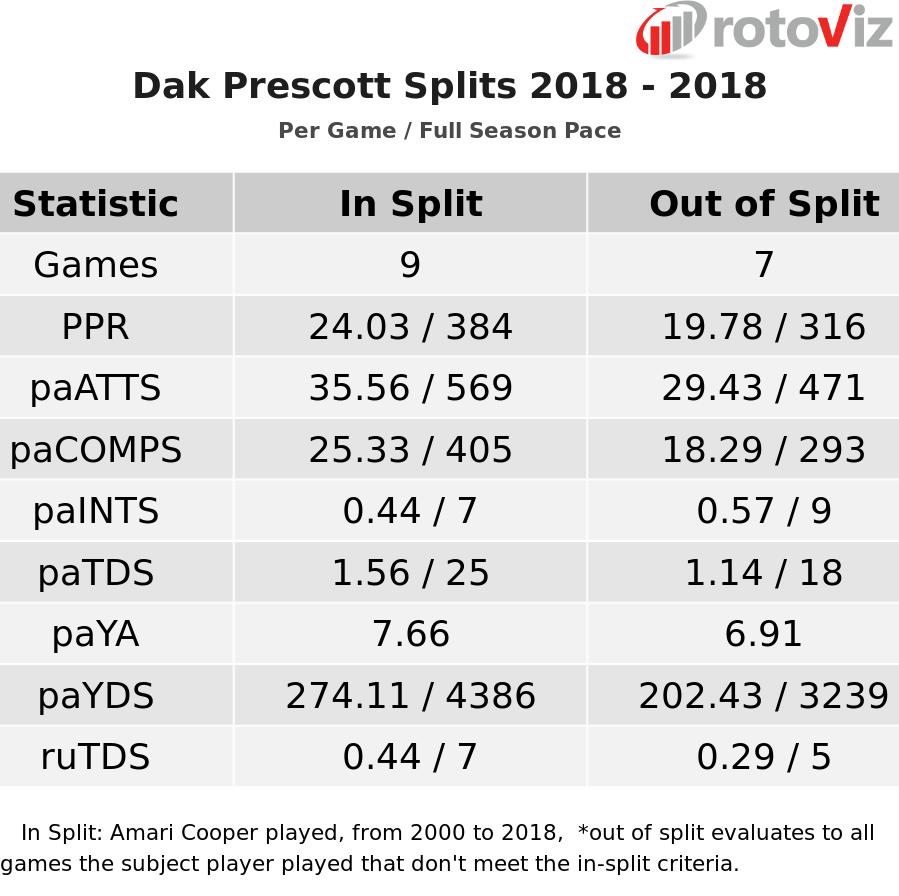 Pretty incredible turnaround! For the sake of reference, his pace with Amari Cooper would’ve made him the QB6 on the season, right in between Andrew Luck and Jared Goff. We can also put to bed the narrative that the Cowboys simply don’t throw enough – his pass attempts with Cooper, if extrapolated, would’ve ranked top 10 in the league last year.

The continuity of Amari Cooper isn’t the only thing working in Dak’s favor this year – he is also getting back some old friends (and a new one as well). Not only is Jason Witten coming out of retirement, but it looks like Dak will have his trusty old center, Travis Frederick, back from his illness that plagued him all of 2018.

This will turn the Dallas offensive line back into elite status, and Witten will give Dak another blocker and safety blanket to work with. He’s had success and familiarity with Witten in the past:

The only player still on the team with whom Dak throws to more efficiently is the aforementioned Cooper, whose AYA is through the roof (just to highlight how much he brings to this offense).

A possibly overlooked aspect of the upcoming season in Dallas is the fact that Jason Garrett will no longer be calling plays. Instead, it will be Dak Prescott favorite and young, new OC Kellen Moore.

This hiring is a sign that Dallas isn’t looking for an old coaching retread to keep trying to bring back the “glory days” of “three yards and a cloud of dust” – they want a new, young mind a la Matt Nagy or Sean McVay to help ignite their offense. The talk out of Dallas is that there will be much more creativity this year on offense thanks to Moore.

Dak Prescott is extremely cheap, has a history of success, and a reloaded arsenal for this season. With new offensive coordinator Kellen Moore infusing the Cowboys offense with creativity, Prescott looks very likely to outperform his ADP.