The Making Of A Dynasty Champion: Part 4

In Part 4 of Making of a Dynasty Champion, we will continue to build our dynasty champion in the middle rounds. Make sure to check out Part 1, Part 2, and Part 3 to see the complete process thus far!

How often can you get a potential WR1, who is tied to one of the best young quarterbacks in the game, for the price of a 6th round pick?

Let me address the elephant in the room here: yes, Will Fuller has yet to play a full 16 games in the NFL, but some of that is just unlucky. ACL tears are fluky injuries that can happen to any player and it isn’t fair to simply label someone as “injury prone” over it.

Fuller is expected to be back and fully healthy for the start of the season coming off the ACL injury, and when Fuller has been on the field and paired with Deshaun Watson he has been nothing short of dynamic. 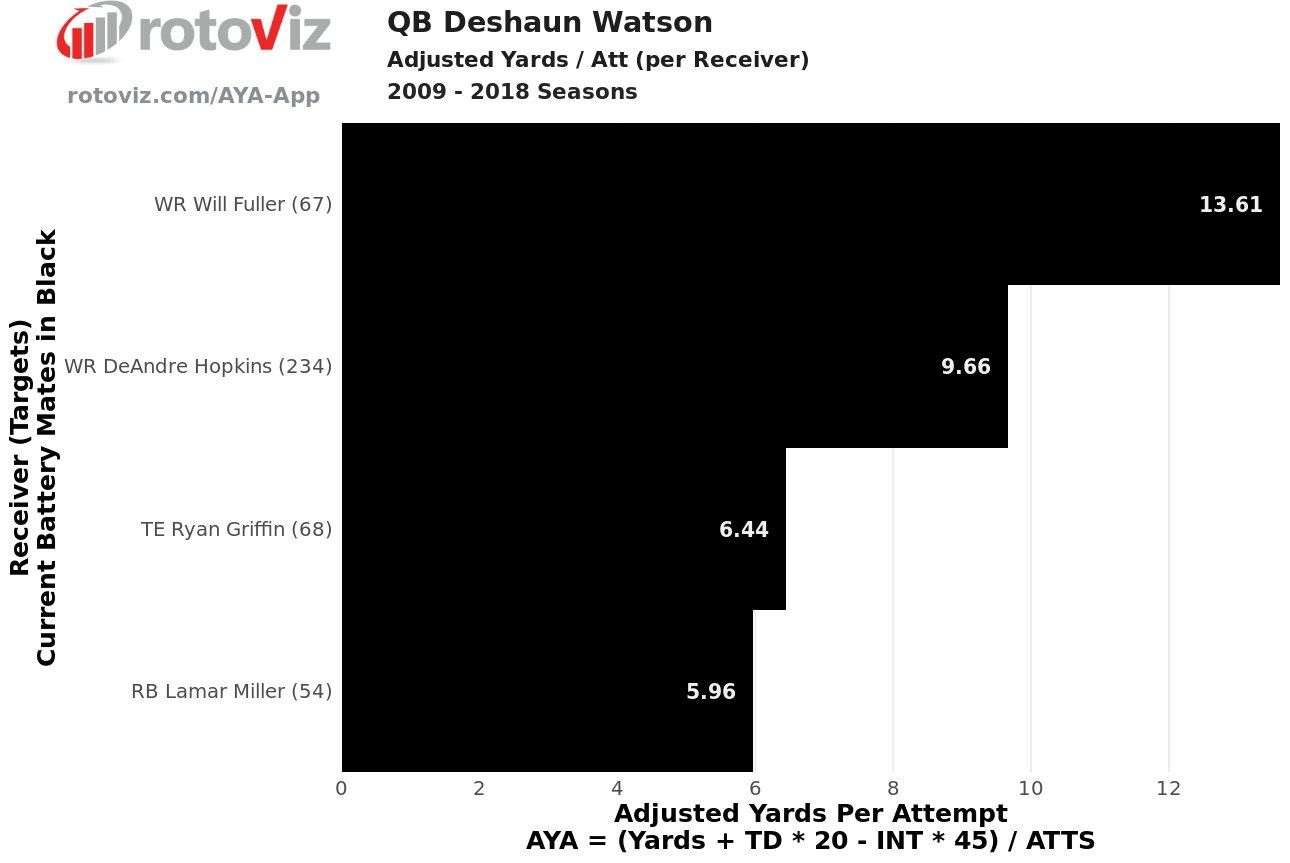 Fuller’s 16 game pace with Watson would have put him firmly in the WR1 discussion as he would have finished as the WR10 last year.

Obviously, that seven touchdown outburst in four games in 2017 skews it a bit, but if we look at 2018 alone we see a very similar and more realistic pace that still would have him finish as WR14.

Fuller has shown the game-breaking talent he is when on the field and with a full season, we will see the inevitable breakout from him.

Chalk Rashaad Penny up as having one of the stranger rookie seasons in recent memory last year. Penny was drafted higher than expected in the 1st round of the NFL draft and went to a team that in training camp was constantly praising another one of their running backs, Chris Carson.

They called Carson the starter despite being a 7th round pick, having played four career NFL games, and coming off a season-ending injury. Penny missed the entire preseason with a hand injury that left him behind schedule as Carson ultimately took the starting job and never looked back.

Touches were hard to come by for Penny, but he actually did quite well when getting those touches. Believe it or not, Carson and Penny were very similar across the board in most efficiency stats as neither really stood out last year.

Penny was effective but there’s no great reason for optimism in the immediate future – but the Seahawks 1st round investment in Penny is significant.

According to The Analytics of Dynasty, 18 of the past 20 1st round running backs have finished as a top 24 RB in their first three seasons. Penny would be a huge outlier if he were to not meet that threshold. Penny also had an extremely strong resume coming out of college as he looked primed to be an NFL workhorse and compared favorably to a few NFL workhorse backs including Melvin Gordon.

If Penny found that opportunity this year, he could really thrive for a team that had the highest run-to-pass ratio in the NFL. In dynasty drafts, it is extremely hard to find workhorse running backs outside the first three rounds and Penny is still the same player that we were excited about last year despite opportunity concerns. If there is a running back that emerges in the later rounds this year, my bet would be on Penny being that guy.

Knowing that the average 1.07 rookie gets picked around 64th overall I figured it was a value to grab another rookie before the inevitable rookie run started.

Campbell isn’t the type of receiver prospect I would normally find myself drafting, but I’ve changed my stance on him recently. Campbell set the single season reception record at Ohio State last year and became the first Buckeye WR since 2002 to eclipse 1,000 yards receiving.

According to Pro Football Focus, Campbell was 3rd amongst all incoming rookies in slot yards per route run at 3.44. That’s pretty incredible considering the fact that he only averaged 11.8 yards per reception last season.

He then proceeded to destroy the combine showing his elite athleticism and blazing speed. Campbell was drafted to the Colts, who are currently one of the best possible landing spots. Head Coach Frank Reich was “fired up” to get him. Campbell ran a very limited route tree in college, but the Colts believe he was limited in the offense and didn’t get a chance to show off the full route tree.

Urban Meyer even threw some love towards the Colts and Campbell as he called the pick a “no-brainer” and compared Campbell to former Rookie of the Year and fantasy stud Percy Harvin (who Meyer also coached in college).

Campbell is someone who should be viewed as “safe” in terms of off-the-field issues. Reich said Campbell’s position coach at Ohio State said: “I hope my son grows up to be exactly like this guy”. Early reports out of rookie camp are that Campbell “looked like the best player out there”.

Another reason to like Campbell is the weapons around him aren’t a big part of the Colts’ future. Eric Ebron, Jack Doyle, and Devin Funchess are all on the final year of their respective contracts with the Colts. TY Hilton will be playing his age-30 season this year, which is where we typically see receivers start to decline.

There is a very real possibility that in 2020 Campbell is the WR1 (or at least the 1B) in an Andrew Luck-lead offense, which is obviously extremely exciting for fantasy purposes.

It’s so funny to me to see the insane rise in ADP that Darrell Henderson has seen in the past couple weeks.

My draft took place in May prior to the Jay Glazer report about Todd Gurley’s chronic and degenerative knee condition shook the fantasy landscape.

However, shrewd owners should still have seen Henderson as a massive post-NFL draft value, as everything leading up to this point should have been screaming that something was wrong with Gurley. We didn’t need a report from mainstream media to know Gurley likely isn’t going to get a full workload. Todd Gurley’s touches dropped by over six per game in the second half of the season last year.

Something clearly wasn’t right when freshly signed free agent C.J. Anderson out-touched Gurley in the playoffs 49 to 34, despite the Rams not addressing the concerns.

The Rams matched the Lions offer on Malcolm Brown in restricted free agency to bring him back into the fold and then traded up in the draft for Darrell Henderson.

The Rams are showing their hand: they are very concerned, and it seems extremely likely that Gurley’s days as a workhorse are over. Throw in the fact that Darrell Henderson who had the most efficient rushing career of all-time in college and suddenly that backfield is a lot more dynamic.

Per the Adam Schefter Podcast, “Sean McVay thought (Henderson) was the most dangerous offensive player in the draft.” High praise for a coach with a workhorse running back.

While Henderson is unlikely to out-touch Gurley unless an aggravation to his current injury or a new one occurs, it’s very possible we see Henderson utilized in a hyper-efficient change of pace role and garnering 10-12 touches per game on arguably the league’s most explosive offense.

Henderson was a great receiver in college as he had over 19 receptions in each of his three collegiate seasons. I imagine Henderson will be utilized in a rookie Alvin Kamara-lite role with less work in the receiving game. There’s immense upside here as already demonstrated by his roughly 40 pick increase in ADP in just the last two weeks alone.

Keep an eye out for my next article which will begin with my selections at the beginning of Round 9.