In the previous edition of ADP Risers, we went over Preseason Week 1 standouts James Washington and Darwin Thompson as well as the recently traded Duke Johnson. Who is seeing their ADP rise after the second week of preseason? 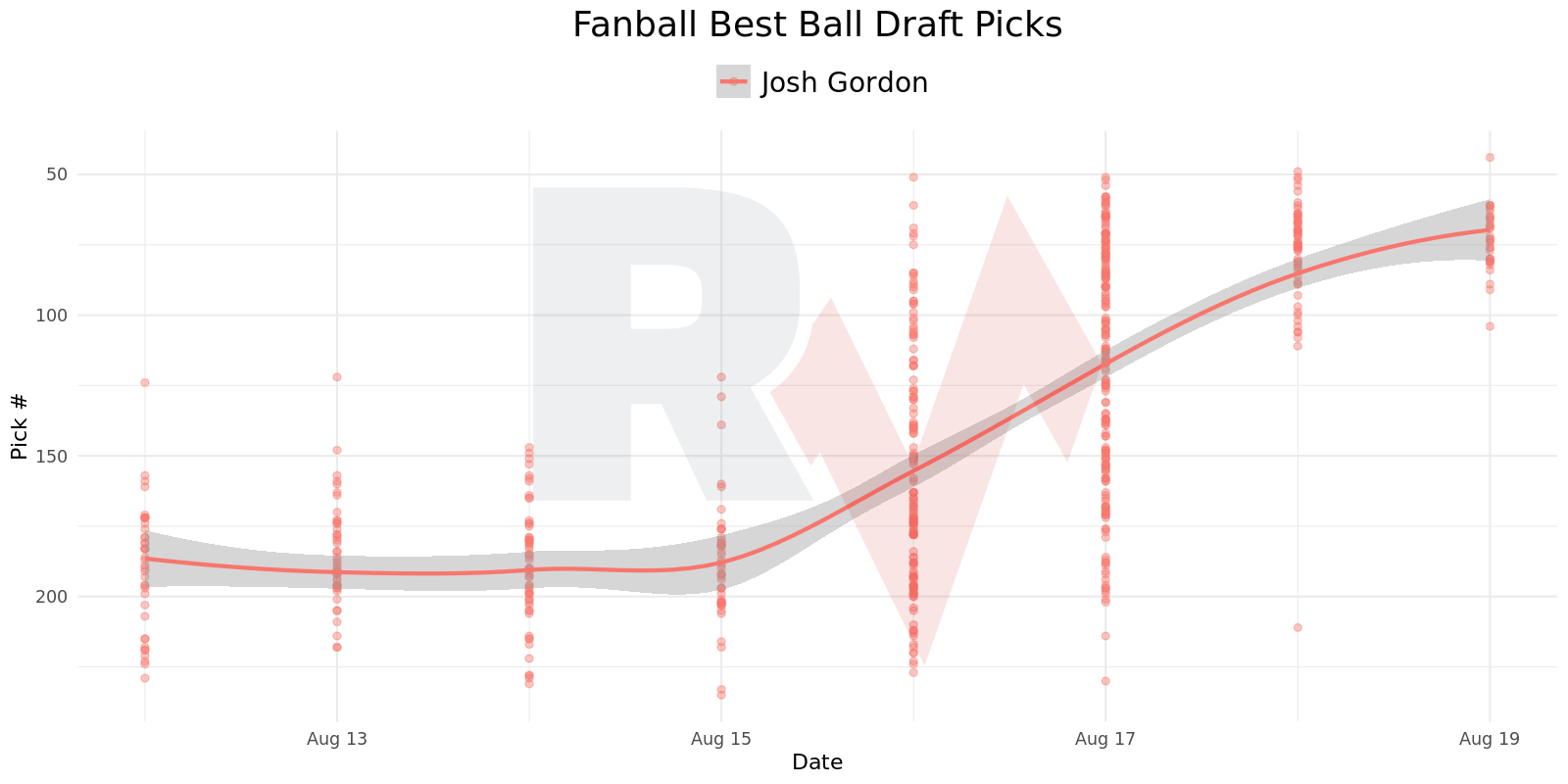 Similar to Duke Johnson last week, Josh Gordon has seen a sharp rise in his ADP without even stepping on the field as he was reinstated from his previous suspension.

Extrapolated over an entire season, Josh Gordon would have finished in the top-25 wide receivers. For reference’s sake, the 25th WR in Apex drafts is currently being drafted at the end of the 5th round. As you can see, Gordon’s ADP is beginning to catch up to his potential.

But he still may be undervalued. In albeit a small sample size, take a look at what he did without the now-retired Rob Gronkowski out of the lineup.

If he kept up these splits, that would’ve made him the WR10 last year. We can probably split the difference and call Josh Gordon a decent WR2 if he can stay on the field this year – a big “if”, truth be told. We also have the arrival of N’Keal Harry and the hype around Jakobi Meyers to contend with when we discuss target share.

At his current cost near the end of the 5th/early 6th round, I would still take guys like D.J. Moore, Robby Anderson, Will Fuller and Mike Williams over him. I think he would be a good WR4 on a team with strong RBs and a good WR5 on a Zero RB team.

On a side note, Gordon’s return is excellent news for the fantasy prospects of Tom Brady.

Not to mention, per the AY/A from our friends at RotoViz, Tom Brady’s most efficient receiver of his career (minimum 50 targets) is Josh Gordon. Whenever someone somehow surpasses the Brady/Gronk connection, it is noteworthy.

We have written about Miles Sanders plenty here on Apex (here and here) but the cat is beginning to come out of the bag as his ADP rises from rounds 6/7 to rounds 5/6. With a solid 5 carries for 31 yards with the starters in the 2nd preseason game and runs like this, we can see why:

You can see the vision, change of direction, explosion and power on several of these. pic.twitter.com/cO82eojLQ3

The Eagles have been a tough backfield to nail down the past few seasons, but if we’re betting on the veteran plodder Jordan Howard or the young stud, I’ll bet on the latter every time.

He is a better prospect than every other RB on the team and has been the best runner in camp. According to the beat reports, his time may be coming sooner than we think.

Miles Sanders may be the Zero RB lottery ticket this year. I’m buying him over Tevin Coleman, Derrius Guice, Lamar Miller, and Austin Ekeler. He probably belongs closer to Chris Carson and James White in my opinion.

With the well-known Ezekiel Elliott holdout rumors looming, Tony Pollard has taken full advantage of the opportunity to strut his stuff in the preseason. He has 9 carries for 58 yards (6.5 YPC) touchdown and a reception, to boot.

He looks the part as well.

Pollard was second fiddle to Darrell Henderson at Memphis, but still had a 93rd percentile YPC (7.1) and an impressive 94th percentile target share. Add in a 73rd percentile forty time and you have a really solid backup to Elliott.

It also now looks like the saga may not affect his regular-season status.

Is a new contract on the horizon for Ezekiel Elliot? ?https://t.co/VabACp5N3K

Either way, Pollard has gone from free in drafts to well…slightly less free.

He has gone as high as the 9th round in Apex drafts (join one today!) and continues to climb up people’s sleeper boards. I wouldn’t take him over Matt Breida, but definitely ahead of guys like Dion Lewis, Frank Gore, and Ito Smith.