While many of us are quarantined due to COVID-19, we have an opportunity to take an even closer look at free agency and its implications. We’ll breakdown each of today’s big moves.

The full trade includes the Cardinals receiving a second-round pick and giving up a fourth-round pick.

From an NFL perspective, this trade is laughable. It’s hard to come up with an acceptable reason why the Texans would make this trade.

Hopkins is a historically great receiver. He’s one of 13 wide receivers ever to top 8,000 yards in their first seven seasons. 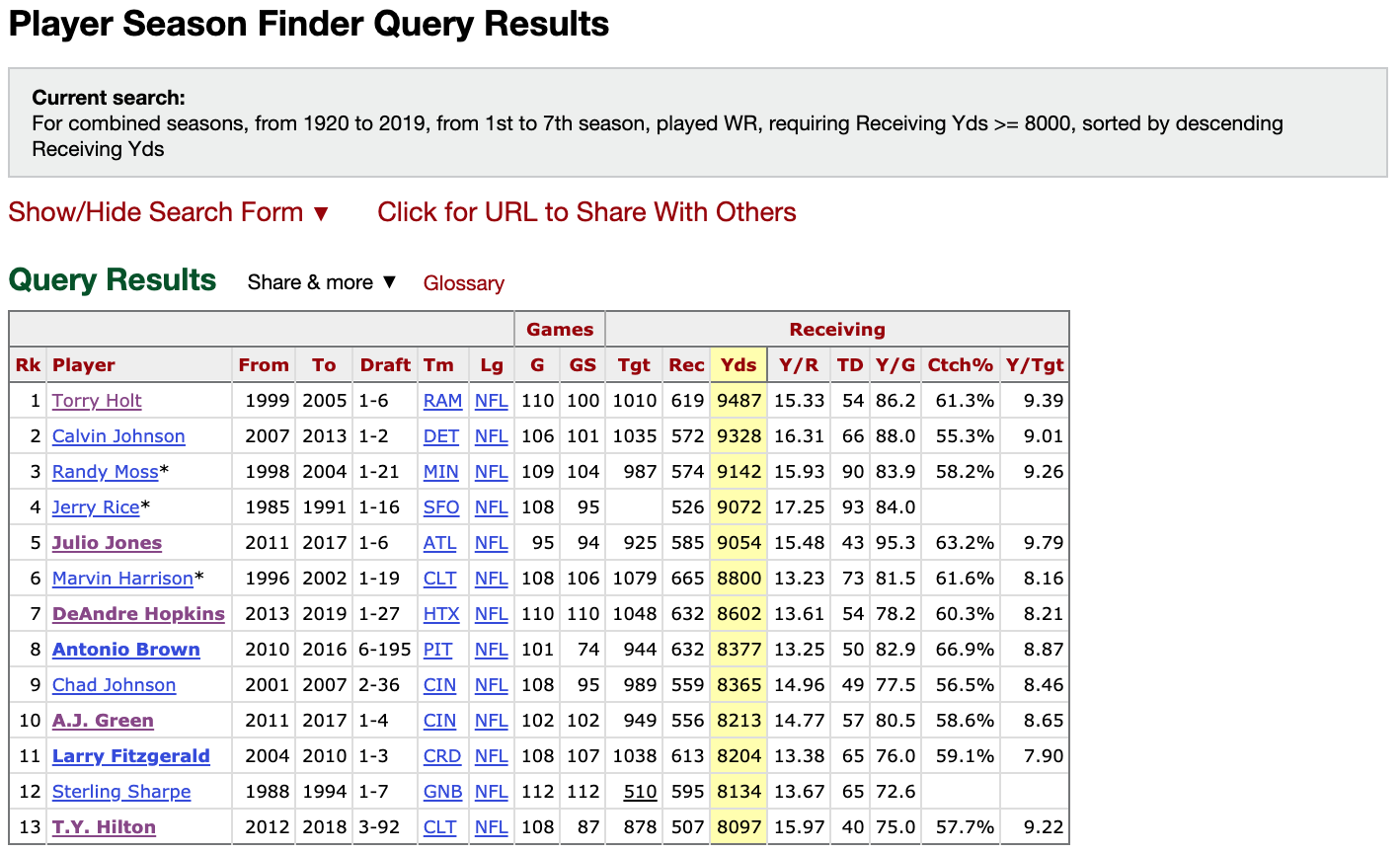 With over 2,600 receiving yards over the past two seasons, Hopkins remains one of the league’s best receivers.

David Johnson, on the other hand, is trending in the wrong direction. After finishing as the RB1 in 2016, Johnson has played in 30 of a possible 48 regular-season games and averaged just 3.6 yards per carry.

Entering his age 29 season, there are serious age concerns for Johnson this year. It’s fair to wonder if he’ll ever be the same player that we have fond memories of, with the smart money being on “no”.

The reality is the Cardinals wanted to cut Johnson, but it was “not an option”. Cutting Johnson would’ve resulted in an exorbitant $16.2 million in dead money. I guess the Texans forgot that having a running back doesn’t correlate to winning – even after the Cardinals tried to teach them this important lesson. Bill O’Brien could’ve learned this from the Rams as well:

Life is tough when you pay RBs.

Only one of the six even delivered a full workload the last two years.

It's tough to accept, but you can literally find RBs anywhere. pic.twitter.com/YFZM721Uuy

Remember the Cardinals acquired Kenyan Drake at the end of October for just a conditional sixth-round pick. The Texans also traded a third-round pick for Duke Johnson just last offseason – only to give Carlos Hyde 162 more carries.

While it’s clear who won the trade, the fantasy winners aren’t as obvious. Hopkins will remain a WR1 but may see a slight regression due to changing teams and a downgrade in chemistry with his quarterback.

It’s an obvious boost for Kyler Murray, who finished as the QB8 as a rookie. Christian Kirk and Larry Fitzgerald will likely see a reduction in targets but a boost in efficiency. With top weapons of Will Fuller and Kenny Stills, Deshaun Watson must be downgraded.

With Carlos Hyde leaving, the Texans backfield will be formed by David and Duke Johnson. There seems to be an overlap in skillsets as both are good receiving options who struggle running between the tackles.

The Cardinals placed the transition tag on Kenyan Drake today. He looks locked into the heavy workload that he was receiving after being traded to the Cardinals last season.

Stefon Diggs Traded To the Bills

Bills acquired Stefon Diggs and a 2020 seventh-round pick from the Vikings in exchange for 2020 first-, fifth-, and sixth-rounds picks and a 2021 fourth-round pick. Unlike the Texans, the Vikings received an appropriate amount in return for a star receiver.

For Diggs, the move could be beneficial. The run-heavy Bills ran 48 more plays than the even run-heavier Vikings last season. The Bills passed 47 more times and their top target, John Brown, was targeted 7.7 times per game. Diggs was targeted just 6.3 times per game last year and that number dropped to 5.7 targets when Adam Thielen played.

Remember that Diggs averaged 12 yards per target last season, which is likely an unsustainable rate even if a player is staying with the same team.

While changing teams usually results in a loss of fantasy value, it’s conceivable that Diggs gains targets in this trade and targets are the lifeblood of fantasy scoring. There’s also the potential for the Bills to put more on Josh Allen’s plate in Year 3.

As our own Asher Molk correctly predicted in January, the Colts signed Rivers to a one-year, $25 million contract.

With the Colts, Rivers loses the arsenal of weapons that the Chargers had but gains one of the league’s best offensive lines.

There are causes for concern: Rivers threw 20 interceptions and finished with the lowest touchdown rate since becoming a starter. However, Rivers finished 11th in yards per attempt and remains a serviceable game manager. He will remain a QB2.

The Panthers will head into 2020 with Teddy Bridgewater as their starting quarterback. Bridgewater was 5-0 replacing Brees last season and it earned him a starting job. He is one of the more risk-averse quarterbacks and managed a 9:2 TD-to-INT ratio.

Fortunately, all-world wide receiver Michael Thomas did not suffer in the games that Bridgewater played.

That’s good news for DJ Moore who is likely to remain the offense’s top target.

Bridgewater’s 6.1 average depth of target is also a dream come true for Christian McCaffrey, who will continue to see a plethora of targets out of the backfield.

Austin Hooper finished as the TE6 last season despite missing three games. On a points per game basis, he finished behind just Travis Kelce and George Kittle.

With Calvin Ridley and Julio Jones on the field, Hooper was excellent.

In games without Ridley, Hooper’s targets increased but his efficiency dropped significantly. Ridley was excellent when Hooper was out.

With Hooper leaving, Ridley could see a big jump in Year 3.

On the Browns, Hooper will be forced to compete with Odell Beckham Jr. and Jarvis Landry for targets, but the defense will also be concerned about them.

Hooper will be changing teams, which hurts his fantasy value, but he’ll be in an every-down role and should remain a low-end TE1. David Njoku may still be involved but loses many projected targets from this deal.

To replace Hooper, the Falcons traded for Hayden Hurst. The Ravens also traded a fourth-round pick in return for the Falcons’ second and fifth-round picks.

Like many of the Ravens pass-catchers, Hurst was extremely efficient last season.

The deal is worth $27 million over three years with $18.75 million guaranteed. Cobb was efficient last season alongside Amari Cooper and Michael Gallup but is not a replacement for Hopkins. Unfortunately, Cobb will be entering his age-30 season on an offense that had 63 fewer pass attempts and scored 56 fewer points. Without Hopkins, the Texans could struggle this season.

Jordan Howard is a replacement-level running back who lacks solid receiving ability. He’ll be a two-down grinder on the Dolphins and will offer touchdown-dependent flex value. Howard’s role would be more valuable on a team that scores a bunch of touchdowns and gives him clock-killing carries at the end of games. That is obviously unlikely to happen on the Dolphins.

Over the past couple of seasons, Jimmy Graham has looked like he’s out of gas. On a Packers team that needed weapons in the passing game, Graham averaged just 3.8 targets per game. In his age-34 season, I’m wary that the former star will be declining even further.

Like Graham, Jason Witten simply doesn’t have much left in the tank. Considering he was 37 years old, Witten had an impressive year last season. This year he’ll be playing behind stud Darren Waller and potentially impressive rookie Foster Moreau. He’s unlikely to have fantasy value.