After writing The Peak Age for an NFL Running Back, I became intrigued with how age affects running backs and how predictable the decline is. Data analysis programming languages, like Python and R, are very helpful when studying historical seasons. Let’s see how successful a predictive model using running back age and PPR scoring can be.

To win fantasy football championships, we are all attempting to identify quality or peak running back seasons — elite players we can start each week.

When it comes to machine learning, you must build and teach a model with a training set. Then, to analyze the accuracy of the model, some observations must be set aside to test the model.

In Kernel SVM I used 75 percent of the observations to train the model, meaning 175 of the 234 seasons were used as a training set. The remaining 25 percent, or 59 observations, were used to test the model.

Based on the type of data being analyzed, the two best algorithms appear to be Kernel SVM and Naïve Bayes. We’ll start with Kernel SVM and see which algorithm is more accurate. 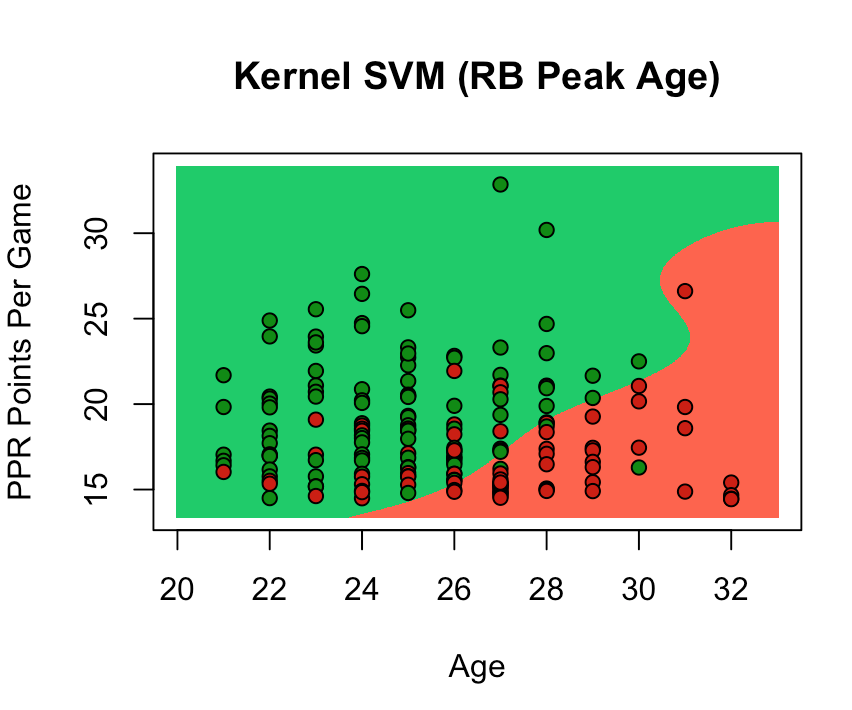 Note that there are far fewer points on the right side of the graph — 84.6 percent of the seasons took place before age 29. Once you include the age-29 seasons, it accounts for 214 of the 234 seasons — 91.4 percent. It is hard to just make this list at 28 years old or older, never mind succeeding in the following season.

The conclusion we can draw so far is the model doesn’t like the older, low-scoring seasons. The drop-off begins for low scoring seasons between age 27 and 28 seasons. At age 29, a running back play looks likely to fall off. This is the training model, which the machine learns from. Now so we will see how the model fares in predicting the remaining 59 observations.

Let’s check the results of the Kernel SVM Test.

Out of 59 total observations, the Kernel SVM model predicted 45 correctly, which is an accuracy rate of 76.2 percent. While there are some incorrect predictions on the boundary, the model does a decent job of predicting the drop-off.

For the Naïve Bayes model, there are also 59 observations to test the model or 25 percent of the seasons. 175 observations were used to train the model.

The Naïve Bayes algorithm returns a similar result – as the curve appears to follow a very similar line. Let’s check the results of the Naïve Bayes model test.

Out of 59 total observations, the Naïve Bayes model predicted 47 correctly which is an accuracy rate of 79.6 percent. It was a little more accurate than the Kernel SVM model and on average, will predict four out of five seasons correctly.

The two things that cause the models’ concern are old age and low scoring seasons. I wrote this article last season and the model advised avoiding David Johnson.

Mark Ingram will play next season at 31 years old and with a relatively low-scoring RB1 season, the model lists him as a clear fade.

Playing next season at 24 years old after averaging over 29 fantasy points per game, the model couldn’t be more optimistic about McCaffrey’s odds of remaining elite next season.