This year especially, it seemingly never feels safe to take a running back (outside of the top five) with all of the depth and talent at wide receiver. Every non-elite running back has its obvious warts whether it’s a lack of receiving production, capped opportunity upside, or simply having no track record of being the alpha dog in a backfield. But have no fear: Chris Carson is your possible savior as an early-round RB at his current ADP.

Chris Carson Had An Underrated 2019

Although Chris Carson had really flashed previously, concerns about Rashaad Penny’s possible takeover hung over Carson heading into the 2019 season. But the Seahawks remained memorably unwavering in their commitment to Carson both in word and deed even as he battled real fumbling issues:

Carson not only received consistent touches in 2019, but he was incredibly efficient when receiving the lion’s share of Seattle’s carries. Here is a list of 2019’s top-12 RBs (with at least 150 carries) in terms of Rushing Success Rate (courtesy of Sharp Football Stats):

Carson, checking in at number three, finished ahead of many of the other top runners in the game en route to an overall RB12 finish despite playing only 15 games.

Seattle Is Due For Positive Rushing TD Regression In 2020

It’s no secret that under Brian Schottenheimer, the Seahawks continued to be one of the most run-heavy teams in 2019. They finished 3rd in the NFL in total rushing attempts, but that doesn’t tell the whole story.

Per Sharp Football Stats, the Seahawks ran 47 percent of the time in a neutral (leading or trailing by 7 points or fewer) game script, good for 5th highest in the league behind only Baltimore, Tennessee, Indianapolis, and San Francisco. They also ran at the 11th-highest clip and lead the NFL in Rushing Success Rate inside their opponent’s 40-yard line.

Last year’s concerns about Rashaad Penny turned out to have little effect on Carson’s workload and production, even when Penny was healthy: 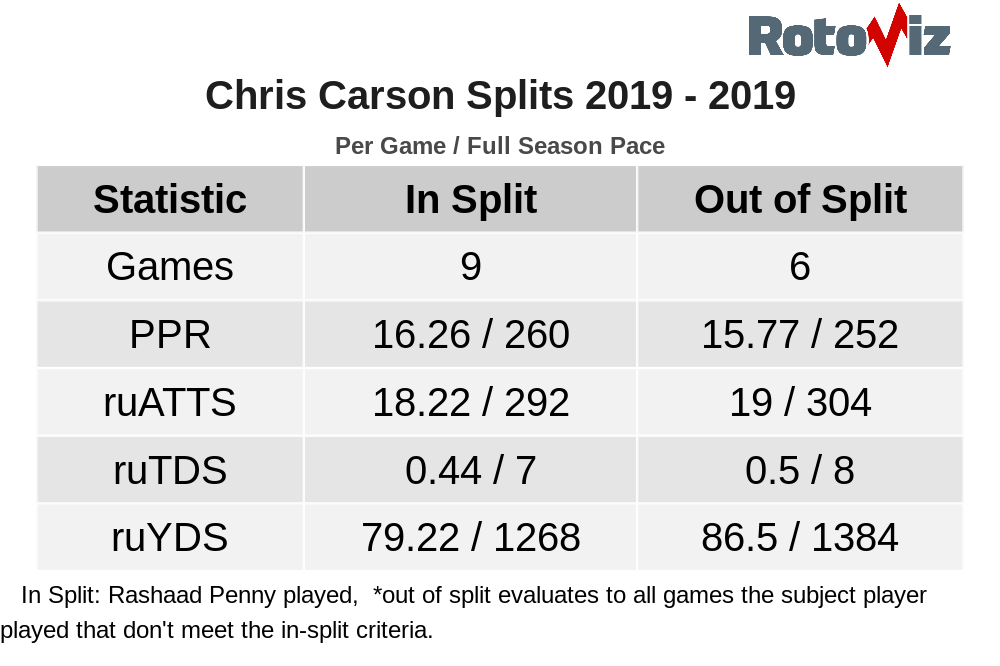 Rashaad Penny suffered a severe knee injury which was described by the team as “more than just a normal ACL tear”, and even the ever-optimistic Pete Carroll believes he will not be ready for the start of the season. Carson himself got injured as well, but did not even require surgery on his broken hip and is fully expected to be ready for Week 1.

The Seahawks signed Carlos Hyde to help shore up the backfield, but despite his success in Houston last year, it is believed that his signing is more about replacing Penny. Hyde himself is recovering from shoulder surgery, and word around Seattle is that Carson is still going to be the primary back in 2020.

Carson Outperformed Other RBs Near His Current ADP

Chris Carson is currently going as the RB22 with the last pick of the 3rd round. Let’s take a look at how he fares in comparison to other running backs going near him when looking at 2019 upside and consistency:

Not only was Carson the most consistent in terms of games played, but he also had the highest percentage of RB1 weeks. Despite not being known as a receiving back, Carson finished only behind Bell on this list with 47 targets, enough for a respectable 24th-most among RBs – not bad considering he is being drafted as the RB22. With Penny injured, his receiving ceiling is only raised for this upcoming season.

Carson will also turn just 26 years old in September, leaving him in prime territory for a peak running back season.

Chris Carson is a bargain at the end of the 3rd round, especially for teams who couldn’t pass up WR value or an elite TE in the first two rounds. He was 5th in the league in carries and yards, is on one the most run-heavy yet explosive offenses in the NFL (which is due for positive rushing TD regression), has a respectable receiving ceiling and floor, is lacking real competition, and has a superior track record to those players going around him.