Lock On To These Two Wide Receiver Targets

When I evaluate a player, I go through every piece of the puzzle. The most important pieces include college production, athletic profile, and NFL production. There are two wide receiver targets that check every box: DJ Moore and JuJu Smith-Schuster.

Why D.J. Moore Is A Wide Receiver Target

Before and after being selected as a first-round selection, D.J. Moore has been dominant. His college dominator rating is 97th percentile, only to be outdone by his 98th percentile breakout age.

His athletic profile leaves very little to be desired. He’s fast, heavy, and shows impressive leaping ability, and agility. He even boasts impressive hand size. It’s not a stretch to say Moore’s Player Profiler page is a work of art.

Moore’s rookie year checked another box, as he averaged 9.6 yards per target on 82 targets as a 21-year-old. Since he was drafted in the first round at 21 years old and weighs 210 pounds, Moore joins a list of 15 wide receivers who all had at least one 230 PPR point season.

Moore has the 9th most receiving yards ever prior to turning 23 years old.

Sandwiched between DeAndre Hopkins and Allen Robinson, Moore is in excellent company on this list. It’s no surprise the other receiver featured in this article is also on this list.

Last season Moore barely played in Week 16, leaving the game with a concussion. Through 15 weeks, Moore was the WR8. This year he’s being drafted as the WR10.

Through 15 weeks in 2019, Moore was averaging 16.46 fantasy points – after averaging 10.06 as a rookie. Heading into this season at just 23 years old, it’s likely that we haven’t seen the best that Moore has to offer.

Why JuJu Smith-Schuster Is A Wide Receiver Target

Recency bias is a big error frequently displayed by fantasy owners. Just because JuJu Smith-Schuster had a rough last season, doesn’t mean that we ignore all the excellent parts of his profile.

In college, JuJu’s breakout age and dominator rating were excellent, indicative of a player who would be successful in the NFL. His selection in the second round confirmed that NFL teams also believed he was a very good player.

His speed (specifically in the context of his weight) and hand size are excellent. His 97th percentile hand size is tremendous especially when you consider that hand size may be the single most important athletic trait for wide receivers.

Once arriving in the NFL, JuJu showed he belonged – averaging an insane 11.6 yards per target as a rookie. At the time, that was the most efficient rookie season in NFL history.

In Year 2, JuJu got the volume he deserved – finishing with 166 targets en route to a WR1 finish.

Production at such a young age is one of the best indicators of future success. Remember, JuJu (and DJ Moore) are still younger than some rookies entering the league this year.

Playing through a number of injuries with poor quarterback play led to a poor 2019 season for JuJu. You can knock him for this, but it’s hard to be productive on a team that averaged 186 passing yards per game and threw just 18 total touchdowns.

From 2016-2018, Ben Roethlisberger averaged 293 passing yards per game and 32.4 passing touchdowns per season. In Big Ben’s career, only Mike Wallace has averaged higher adjusted yards per attempt with Big Ben than JuJu. 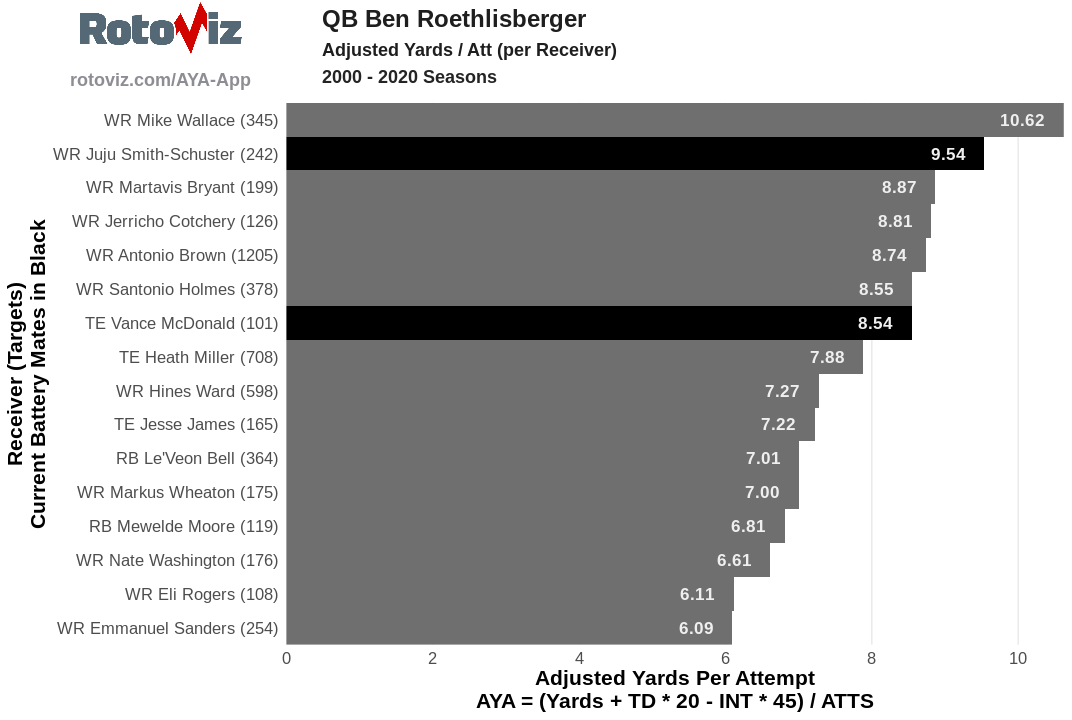 The biggest knock on JuJu seems to be the theory that he can’t produce without Antonio Brown. Yes, there’s no question that having a great wide receiver next to a player helps them in terms of efficiency and touchdown scoring potential. But targets are the lifeblood of fantasy scoring and JuJu should be able to command as many targets as anyone. Remember, he saw 166 targets in Big Ben’s last healthy season.

In addition, fantasy owners are enthusiastic about the Steelers’ other wide receivers. Diontae Johnson is being selected in the 7th round of fantasy drafts after a productive rookie season. James Washington is no slouch either and led the Steelers in receiving yards on 12 fewer targets than Johnson. With Big Ben returning, Washington looks like a steal in drafts after averaging 9.2 yards per target in his age-23 season. He can also be listed among potential wide receiver targets.

D.J. Moore’s entire profile, including his production at such a young age and excellent comparable players, makes him likely to be a top-12 wide receiver this coming season. Moore was on his way to a WR1 finish last season and there’s reason to believe he’ll be even better this season. He is one of the wide receiver targets that you don’t want to leave your draft without this year.

JuJu Smith-Schuster’s already joined many exclusive lists. His early breakout age, weight, hand size, production, and efficiency should lead owners to believe he’s a historically special player. Take the discount, as it could be a long time until he’s this cheap again. At his ADP, he is an excellent value as one of your wide receiver targets for the late 2nd and 3rd rounds. 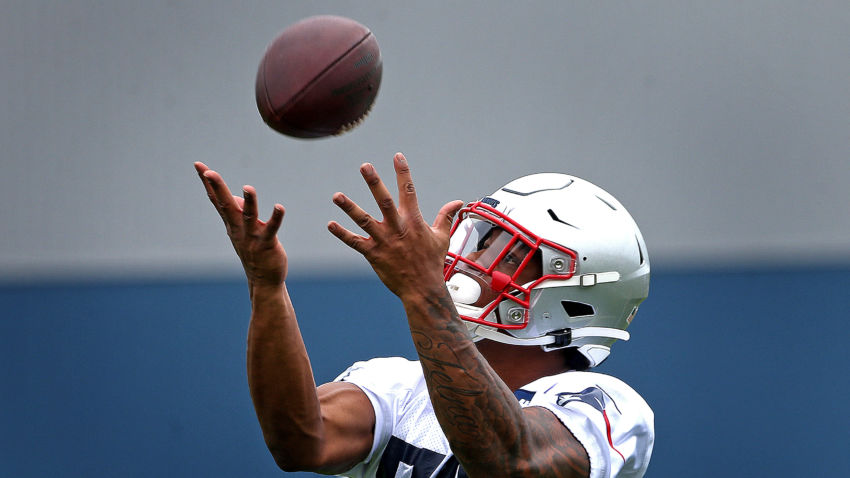