Although Kenny Golladay is the younger, sexier player, he may not be the Lions receiver with the best combination of production and value. His teammate Marvin Jones is an excellent “arbitrage” play, or cheap alternative, to Golladay and is a very good wide receiver value in the middle rounds of fantasy drafts. Why is he a better value than Golladay at his current ADP? Let’s find out why.

While Golladay is certainly the younger alpha dog as the Lions’ WR1, his price-tag is over five rounds earlier than Jones’ with not a huge increase in production.

Other than a discrepancy in yards per game, Jones basically equaled or exceeded Golladay’s 2019 production on a per-game basis. Jones’ success is not a one year fluke either. Here is Matthew Stafford’s adjusted yards per attempt for his career when throwing to a given receiver (minimum 50 targets): 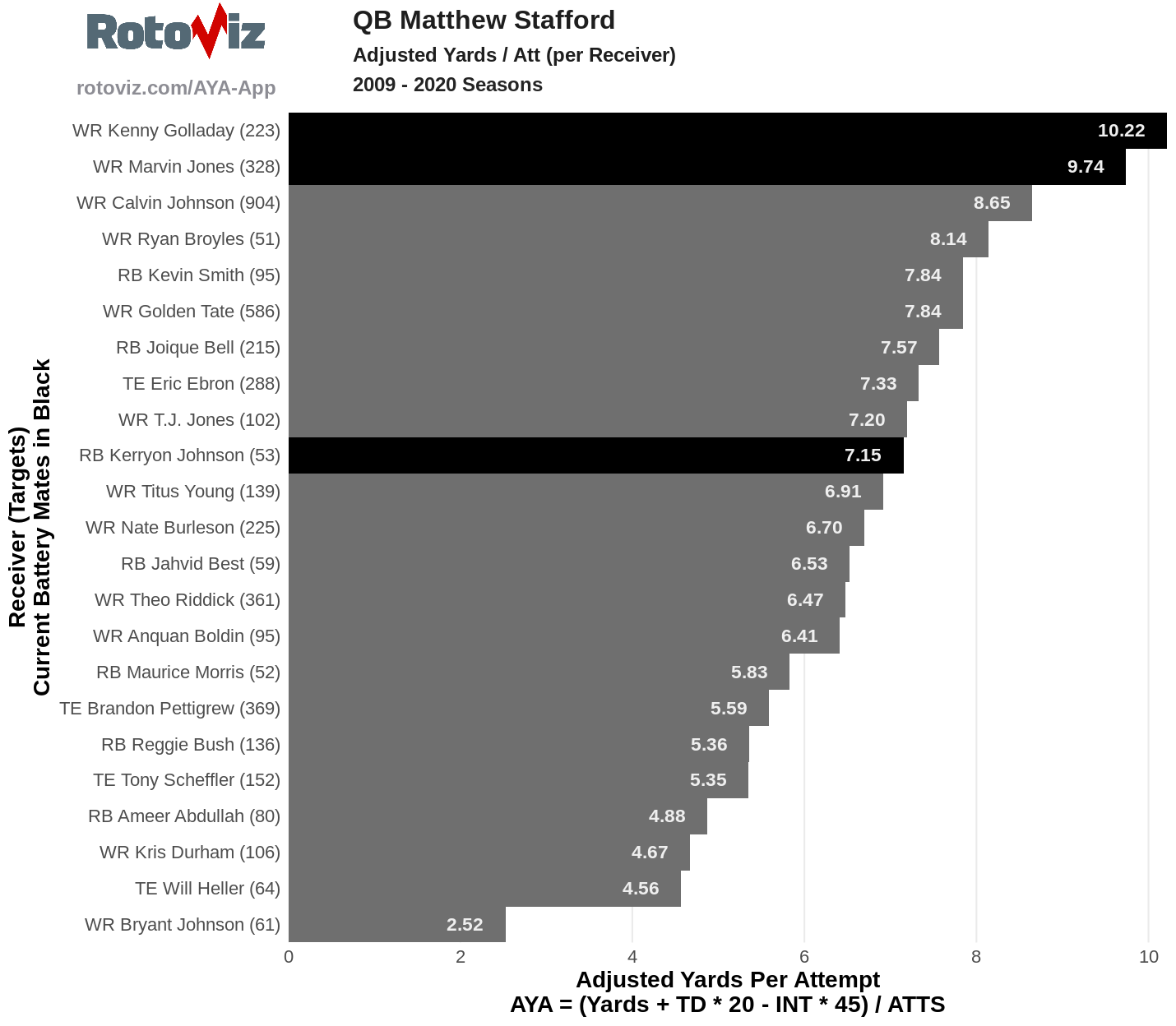 Again, Golladay is at the top, but Jones is right on his heels. In terms of adjusted yards per attempt, the gap between Golladay and Jones is smaller than the gap between Jones and the legendary Calvin Johnson. This also helps illustrate how good Matthew Stafford was when he was healthy in 2019.

Because he got injured halfway through the season, there might be some recency bias in terms of the market’s perception of Matthew Stafford. He was both incredibly efficient and productive during the first half of the 2019 season before he went down with a broken back. Take a look at the Lions’ team splits with and without Stafford:

The Lions were in the upper echelon of pass attempts when Stafford was healthy, but were truly elite in terms of pure passing production. If we extrapolate the Lions’ passing numbers while Stafford was healthy over a whole season, the Lions would have finished 3rd in passing yards, 1st in passing touchdowns and 3rd in yards per attempt (only behind the Titans and 49ers, who both finished in the bottom-four in pass attempts).

All in all, there is ample opportunity in Detroit for multiple pass catchers to be fantasy assets with Stafford at the helm. All reports are positive about his health going into the 2020 season.

3. Jones Sticks Out More Than Golladay At His Current ADP

To draft Kenny Golladay, you’re going to have to spend a 3rd round selection. This comes with a high opportunity cost, as you will have to pass up other wideouts like D.J. Moore, JuJu Smith-Schuster, Mike Evans and Odell Beckham (all players who are the same age or younger, likely with higher target potential), running backs like Chris Carson, Jonathan Taylor and James Conner, or an upper-echelon tight end such as Mark Andrews or Zach Ertz.

That is a pretty high price to pay for a 26-year-old wide receiver who finished 21st in targets and 29th in receptions despite playing all 16 games last year – alarming figures since he is being drafted as the overall WR8. Stafford’s injury may have had a negative effect on efficiency, but they only passed one time fewer per game without him in the lineup.

Marvin Jones certainly does not have the same ceiling for targets as the other 3rd round wide receivers mentioned above, but you are not paying a 3rd round price for him. Instead, you have to choose between him and receivers like Brandin Cooks, Christian Kirk, CeeDee Lamb, and Darius Slayton.

Using our very own Mike Braude’s free expert projections (sign up for our email list to get them automatically!), let’s compare the wide receivers around Marvin Jones’ ADP to see how his projected production fares against his peers:

Jones is atop or near the top in every category, but his upside and situation are not built into those statistics. Cooks is coming off of a career-worst season and major concussion issues, while the others face major target competition and have never proven themselves as a fantasy asset. He is also one injury away from becoming the alpha receiver on a proven-elite passing offense: something very rare to get in the 8th round, especially considering his high floor.

All in all, I would much rather take a higher upside player in the 3rd round than Kenny Golladay, and you can have 80-90 percent of his production in the 8th round with Marvin Jones. Passing on Golladay to take JuJu Smith-Schuster or D.J. Moore and taking Jones in the 8th sounds much better than pairing Golladay with Brandin Cooks.