10 Rookie Running Backs You Should Know For Fantasy Football 2020

The COVID pandemic may be frustrating for rookies who will now have a limited amount of time to win over their coach’s approval and prepare for the season. However, this excellent 2020 rookie running back class shouldn’t be ignored in fantasy leagues this year.

Here are the rookie running backs that are likely to make a fantasy impact in 2020. The running backs are listed in order of their draft position. Our friends at Player Profiler helped us with many of the production and athleticism metrics.

The only running back selected in the first round of the 2020 NFL draft was Clyde Edwards-Helaire. Edwards-Helaire wasn’t involved as a freshman but broke out as a sophomore before a dominant junior season. As a junior, he topped 1,400 yards on the ground and 450 through the air with 17 total touchdowns. Most impressively, he caught an incredible 55 of 58 targets.

Heading into 2020, Edwards-Helaire has the best landing spot of any rookie running back. On arguably the league’s best offense, he doesn’t have much competition outside of Damien Williams. As a first-round pick, there’s little doubt that Edwards-Helaire will be heavily involved. He’s already being selected, on average, in the second round of redraft fantasy football leagues.

D’Andre Swift was the second running back selected in the 2020 NFL Draft. As a freshman, Swift was involved but played behind Nick Chubb and Sony Michel. As a sophomore Swift broke out, leading the Georgia Bulldogs in rushing and finishing third in receptions. Georgia continued to lean on Swift heavily in his junior season when he entered the NFL draft.

Swift is a 21-year-old rookie running back, which is favorable in terms of age-adjusted production. He has an impressive 80th percentile speed score which combines 40-time with weight. Swift showed in college that he has the ability to lead a team in rushing and be the team’s primary receiving threat out of the backfield.

The Lions, unfortunately, didn’t target the running back position frequently in the passing game last season – not exactly great news for fantasy football. Hopefully, that will change with the addition of Swift. With high second-round draft capital in a great class of rookie running backs, fantasy owners are expecting Swift to lead the Lions backfield. While COVID could help Kerryon Johnson maintain a decent amount of work, Swift should be leading the Lions in touches by the end of the regular season.

Those who frequently follow my writing know that Jonathan Taylor is my favorite running back in this class. He ranks first in NCAA history for rushing yards through a player’s first three seasons with 6,174 rushing yards. Since his true freshman season, Taylor was a workhorse for Wisconsin. While he’s predominantly a rusher, Taylor also excelled through the air when given opportunities.

Another 21-year-old, Taylor has many years of dominance in his future. At 226 lbs. Taylor ran a 4.39 40-time. That is a 99th percentile speed score, a metric that combines weight and speed for a specific position. He combines those impressive metrics with above average leaping ability and agility. Our friends at Player Profiler list Ezekiel Elliott as his best comparable.

Taylor’s production and athleticism make him arguably a perfect running back prospect, especially for fantasy football. While Marlon Mack was successful for the Colts last season, they didn’t draft Taylor for him to sit on the bench. Taylor has viable competition with Mack on the ground and Nyheim Hines as a pass-catcher, but betting against Taylor is a bad idea – even in Year 1.

As a true freshman, Cam Akers led Florida State in rushing yards and attempts. He maintained the starting role throughout his college career before declaring for the NFL draft. As a junior, Akers dominated – out-rushing the rest of his teammates combined while finishing third on the team in receptions.

The youngest running back in this draft class, Akers is positioned well for many years of fantasy relevance. Running a 4.47 at 217 lbs. gives Akers an 89th percentile speed score. He also showed well in jumping drills with an above-average burst score.

A complete profile with few weaknesses, Akers is one of the exciting rookie running backs to target in Year 1. Teammate Darrell Henderson is also an intriguing young player who owners shouldn’t be ignoring heading into his second season. Regardless, fantasy owners are expecting Akers to lead the team in touches evidenced by his fifth-round average draft position in fantasy football leagues.

As a true freshman at Ohio State University, Dobbins started and dominated as both a rusher and receiver. Since 2000, he’s the first freshman running back to accumulate 1,400 or more yards on 7 or more yards per carry and catch 20 or more passes in a season. In each year at Ohio State, his rushing attempts, touchdowns, and targets rose – concluding in a 2,000-yard rushing junior season.

While he didn’t participate much at the combine, there’s little doubt about his athleticism. As a 17-year-old Dobbins ran a 4.44 40-yard dash, jumped a 43-inch vertical, had a 4.09 20-yard shuttle, and had a 146.76 SPARQ rating. That SPARQ rating would have put him in the 99th percentile of all NFL running backs.

Although Mark Ingram was excellent in his first season on the Ravens, it’s hard to imagine that the Ravens drafted Dobbins to ride the pine. Limited practice time due to COVID will make it more difficult for Dobbins to earn touches, but it’s possible that he’s so good that his talent demands immediate playing time.

The Green Bay Packers shocked many by selecting AJ Dillion in the second round. It’s not a knock against Dillion – analysts simply expected the Packers to address their needs at wide receiver for Aaron Rodgers. A Derrick Henry clone, Dillion dominated touches at Boston College. Impressively, he rushed for 1,589 yards and 14 touchdowns as a true freshman. He continued dominating rushing attempts throughout his college career.

At 6’0” 247 lbs., Dillon is built like a workhorse running back. He combines his rare size with excellent speed, giving him a 97th percentile speed score. With a 97th percentile burst score; the man is also an incredible leaper.

On the Packers, Dillon should finish behind only Aaron Jones in carries. His skill-set isn’t the type to expect much passing game involvement, which limits his fantasy football floor and ceiling. The real fun for Dillon will likely come in 2021 when Jones’ contract expires.

Selected in the third round by the Washington Football Team, Antonio Gibson is another special athlete who dominated in his last season at Memphis. Trust me, I’m usually not this optimistic about so many players – this draft class is simply extraordinary for rookie running backs. Unfortunately, it took Gibson until his senior season for him to breakout.

The reason we’re optimistic is he was dynamic, it’s hard to ignore. For his entire college career, he scored on 14 of 77 touches, while gaining 1,203 yards. As a rusher, he gained 11.2 yards per carry and a receiver, he topped 13 yards per target. Gibson is also a freak athlete. At 228 lbs., he ran a 4.39-second forty – that is a 99th percentile speed score. Per Player Profiler, his best comparable is Joe Mixon.

The Redskins have a very good running back in Derrius Guice, but he has struggled to stay healthy. Whether Gibson is used as a receiver or rusher remains an intriguing question but there’s reason to think he’s one of Washington’s best pass-catchers. Don’t believe me? Check for yourself.

The Tampa Bay Buccaneers selected Ke’Shawn Vaughn with the 12th pick of the third round. Vaughn dominated in terms of production – especially after transferring to Vanderbilt in 2018. The fact that he played extensively and broke out as a true freshman at Illinois should be taken as a positive. Vaughn also had a promising college target share.

Unfortunately, due to transferring, Vaughn is entering the NFL as an older running back. At 23.2 years old, he’s already older than presumed starter Ronald Jones, who entered the NFL two years ago. At the combine, Vaughn showed above-average speed in the 40-yard dash – but struggled with the leaping drills.

The fantasy community is divided over what will take place in the Bucs backfield this season. Ronald Jones was much improved as a sophomore and appears dedicated to keeping his spot. Vaughn, a more natural pass catcher, could be Tom Brady’s James White replacement.

The Las Vegas Raiders selected Lynn Bowden Jr. with the 16th pick of the third round. Bowden was asked to do everything at Kentucky: running back and receiver, before being asked to start at quarterback as a junior. As a sophomore, he actually broke out as a receiver – achieving a 36 percent dominator rating. In his junior season, he rushed for 1,468 yards and 13 touchdowns.

Bowden will be a 23-year-old rookie, which lands him on the older side for a prospect. Unfortunately, Bowden did not participate in the combine, so we do not have a clear picture of his athleticism.

With 748 receiving yards in 2018, Bowden actually broke out as a receiver. While the Raiders continue to say they’ll target Josh Jacobs more, drafting Bowden and resigning Jalen Richard aren’t glowing endorsements. If Bowden can beat out Richard as the pass-down back, he may have some standalone fantasy football value in 2020.

In the third round, the Buffalo Bills selected Zack Moss from Utah. Moss broke out as a sophomore and dominated backfield work until he declared for the NFL after his senior season. He ended college with an 82nd percentile dominator rating and a 68th percentile college target share. His domination of touches and involvement in the passing game are promising for his future.

Moss will play his rookie year at 23 years old. A promising 93rd percentile BMI, Moss is a sturdy 223 lbs. Unfortunately, with a 4.65 40-time, he’s considered slow by NFL standards. When weighted with his weight, Moss has a 46th percentile speed score. He’s not going to win in the NFL with speed.

With just Devin Singletary to compete with, Moss looks likely to have a role both in real life and for fantasy football in 2020. Singletary, who was also drafted in the third round based on his college production, is a similarly poor athlete by NFL standards. Expect the two to form a backfield duo for the Bills this season. 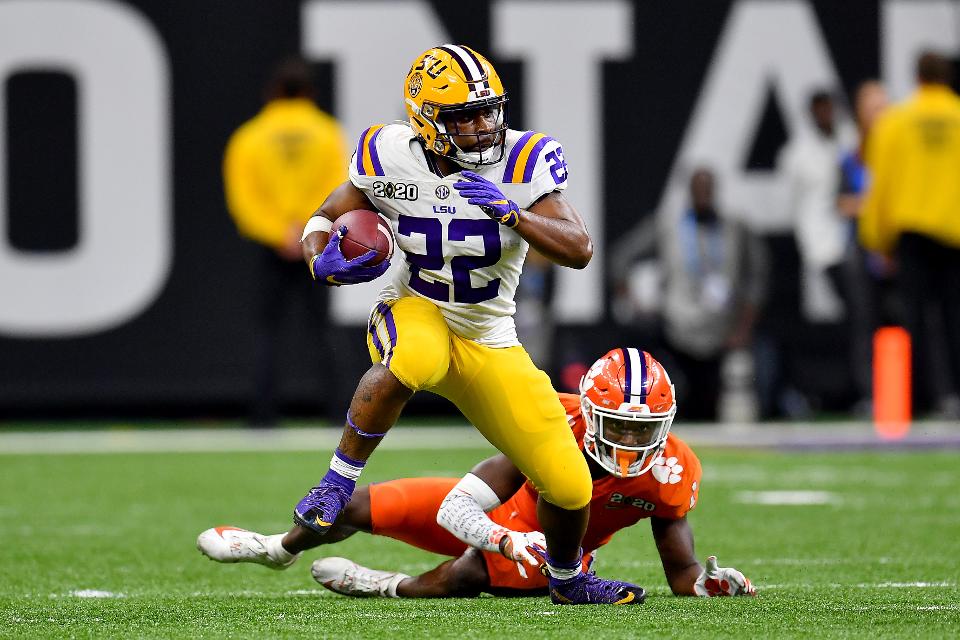 Very informative info given. Thanks a new loyal reader.

We are honored to have you!