In Part I of this article, we went through some of the biggest 2022 NFL Draft Winners at the QB, RB, and TE positions. A trio of wide receivers ready for third-year breakouts make up the second half of our analyses of players whose stock is up following the draft.

Despite a hugely successful offensive in 2022, the Bills entered the offseason with a lot of potential turnover on that side of the ball. Gone are Cole Beasley and Emmanuel Sanders, Isaiah McKenzie returned in free agency, and Stefon Diggs was not what he was in 2020.

Would they draft Breece Hall early in the NFL draft and become more balanced on offense? The answer appears to be a resounding “no”, as the Bills passed on Hall and settled on speedy passing-game back James Cook.

But who is the biggest among the Bills’ NFL Draft winners? We all remember what happened the last time Gabriel Davis stepped on the field, posting a casual 8/201/4 in one of the most epic playoff games of all time. But even before that, Davis was fantastically efficient as a sophomore: 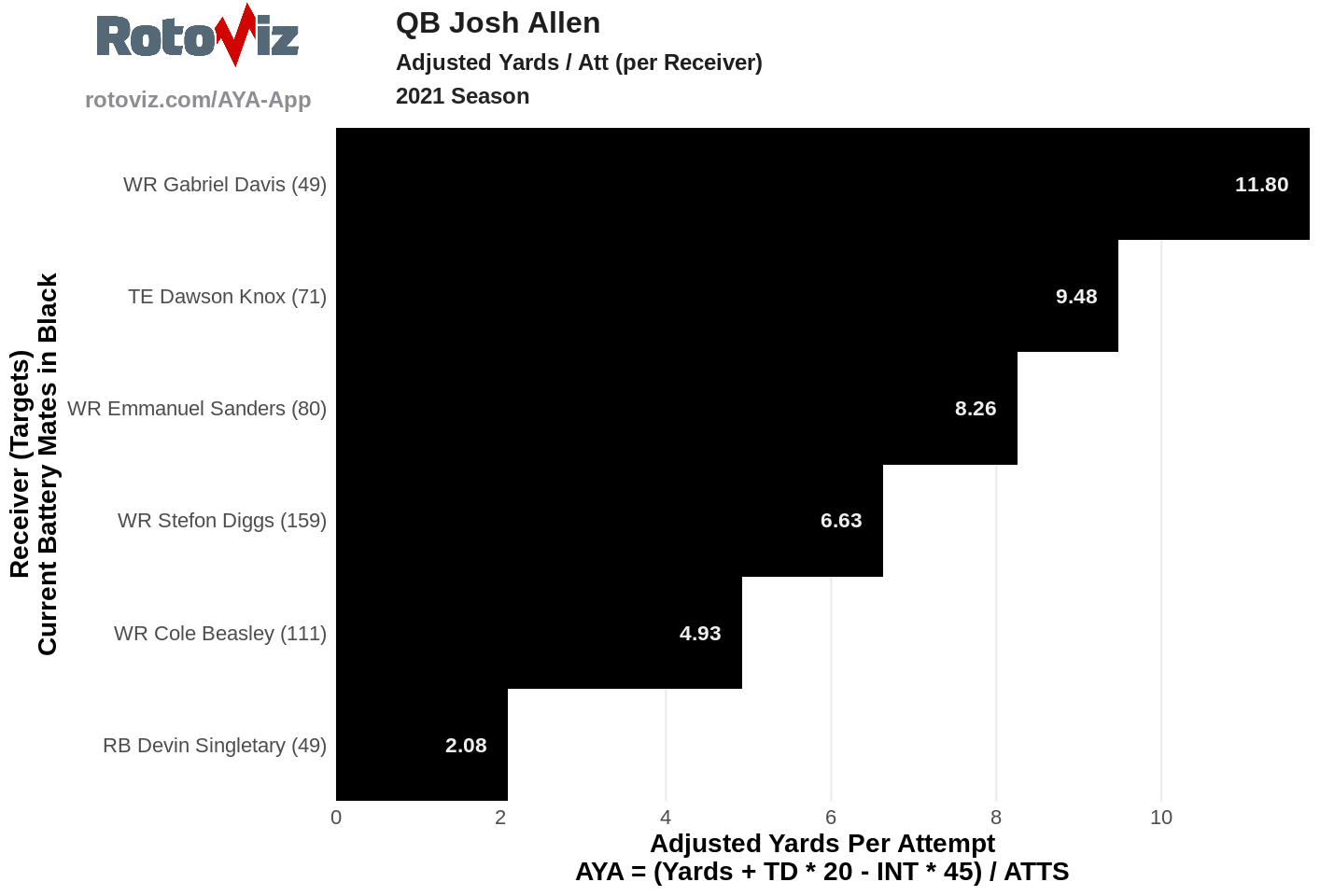 Simply put, there is a perfect storm brewing for Gabriel Davis. His excellent efficiency at such a young age is a great sign for his extrapolatory potential given the targets – and the targets are there. Per our friends at 4for4, Buffalo has the sixth most vacated WR targets in the league from 2021. Sharp Football shows that Buffalo passes at the 2nd highest rate in a neutral game script and has the 2nd highest percentage of targets directed at WRs.

Emmanuel Sanders on Gabriel Davis in 2022:

“This guy is going to have a breakout season”

I dunno about you, but I’m pumped!pic.twitter.com/0Mhpbs96mM

Davis figures to see the 2nd most targets in Buffalo behind Stefon Diggs, who turns 29 this season. Dawson Knox remains a red-zone threat, Jamison Crowder will step in to replace Cole Beasley, and Isaiah McKenzie will get a few gadget touches per game. But make no mistake, the Bills believe in Davis.

Bills played 34-year-old Manny Sanders over Gabe Davis for most of the season.

But when the chips were down last night, they went to Gabe. Routes run on 41 Josh Allen dropbacks:

Davis’ TD-scoring and vertical ability give him an excellent floor while any injury to an aging Diggs thrusts him into potential WR1 territory. With an ADP in the 5th round, he is an easy selection over the similarly-priced Michael Thomas and Allen Robinson.

After a sincerely depressing 2021, one would think the Chicago Bears passing offense has nowhere to go but up. With the bad taste of Matt Nagy finally out of their mouth and Allen Robinson off to greener pastures, many looked at the Bears as a potential landing spot for one of the many solid WR prospects in the 2022 NFL Draft. Instead, they emerged with this guy (courtesy of Player Profiler):

The speed is impressive, but a 25-year-old rookie with a 1st percentile Breakout Age, 29th percentile Dominator Rating, and poor agility and burst scores do not exactly paint the picture of an above-average NFL contributor. As the offseason has progressed, it’s become clear that one of the Bears’ big NFL Draft winners is Darnell Mooney.

Somehow, Velus Jones is only the appetizer on the platter of mediocre Bears wideouts behind Mooney. Byron Pringle was let go by a team that lost Tyreek Hill, while Equanineous St. Brown, Tajae Sharpe, Dante Pettis, and Dazz Newsome are more likely to be trivia answers in 10 years than major contributors in 2022.

These are not exactly the most inspiring candidates to vacuum up the 8th-most vacated air yards in the NFL. The running backs aren’t going to be sucking up all these targets either: David Montgomery already has enough on his plate, and Tarik Cohen tragically just tore his Achilles after finally being set to return after a catastrophic knee injury.

Enter the hero of our story, Darnell Mooney, who somehow mustered a 81/1,055/4 line on the dumpster fire that was the 2021 Bears’ passing game. After two impressive seasons to begin his career, his comps are looking about as good as they could be considering his size:

It’s become clear that players with Mooney’s profile in his career thus far can carry a heavy load for both NFL and fantasy teams. He is currently going in the 6th round, where you can somehow get him near the likes of Drake London and Treylon Burks.

After tearing up fantasy football Twitter last August with jaw-dropping training camp highlights, CeeDee Lamb’s drafters were slightly disappointed in his 79/1,102/6 line from 2021.

Like the Bills though, the unique contract situation of their skill-position players this offseason gave the Cowboys the chance to show us where they see the future of the offense going. Amari Cooper and Cedrick Wilson are now on other teams, but the Cowboys re-signed Michael Gallup and Dalton Schultz while adding James Washington.

Gallup, however, is highly questionable for Week 1 after a January ACL tear – leaving only perennial underperformer James Washington as the last man standing before guys such as “Simi Fehoko” are forced onto the field. For these reasons, many thought the Cowboys would take a wideout early in the draft.

They settled on South Alabama’s Jalen Tolbert in the late 3rd round, who has a solid production profile (96th percentile Dominator Rating) but is slightly above average at best in every other measurable.

What does all this mean? We know the Cowboys will still commit to the run game as Tony Pollard may begin to take the reins even more from Zeke Elliott, but Kellan Moore and Dak Prescott have had too much success through the air together for them to significantly reduce passing volume.

The most obvious answer to gobble up the 7th most vacated WR targets and 6th most vacated air yards is CeeDee Lamb. He is certainly shaping up to be one of the biggest NFL Draft winners of the offseason.

Beat writers also expect Lamb to take another step forward this season, and he may be your last chance to get a wide receiver in fantasy drafts who is an elite prospect entering (or is in the thick of) his prime and who is also the unquestioned WR1 on a top-tier passing offense.

He’s currently being selected behind Cooper Kupp, Justin Jefferson, Ja’Marr Chase, Davante Adams, and Stefon Diggs in ADP. If you pass on Lamb, you’ll have to pivot to guys who don’t check all of those boxes (Deebo Samuel, Tyreek Hill, Mike Evans, and A.J. Brown).