In the NFL draft, we love to see where rookies land and how teams structure their future – and there are always players who end up NFL Draft winners. The NFL draft is where we also see the movement of veteran contributors for a variety of reasons.

We can learn as much about how a team thinks of their existing players by paying attention to whom they don’t draft or acquire. Here are three non-rookies who emerged from the NFL draft with higher stock. In Part II, we will explore some wide receivers who fit the bill as well!

Jalen Hurts’ 2nd half regression last year is well-documented, but let’s use the Rotoviz Game Splits app to quantify just how severe the transition from pass-heavy to run-heavy offense was in Philly:

However, let’s contextualize the splits to attempt to make sense of them. There is some real evidence that the passing volume waxed and waned simply by the strength of opponent:

Basically, it’s possible that one huge reason that the Eagles did not pass is that they did not have to do so to win in the 2nd half of the season. Even if this proves to be simply correlation and not causation, his rushing output remained consistent throughout the season and will ensure a solid floor: 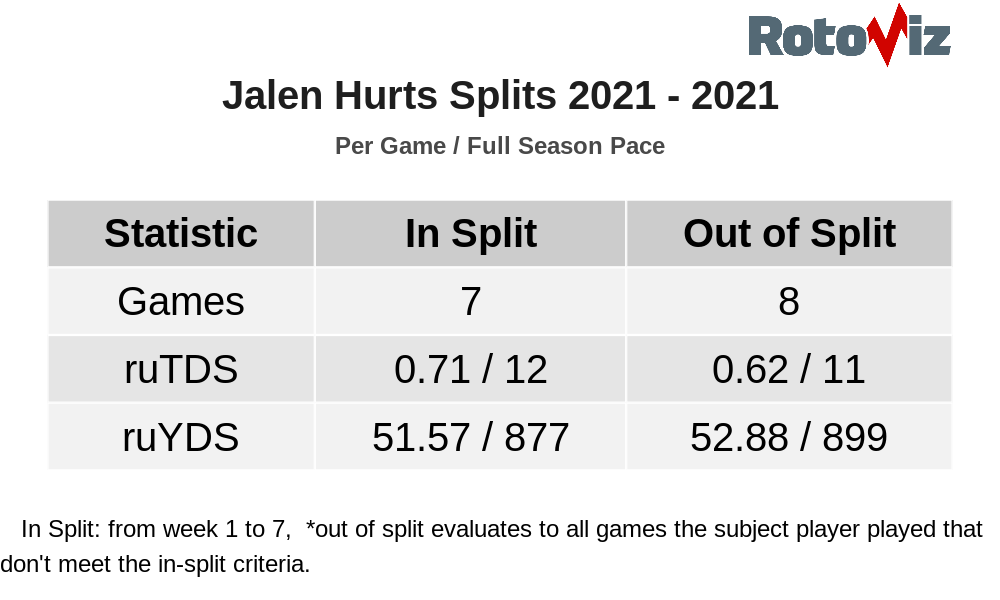 Another possible reason was that the Eagles simply didn’t have the personnel to pass as much as they did during the first half of 2021. They suffered various offensive line injuries, DeVonta Smith was a rookie, Zach Ertz was traded in the middle of the season, and Jalen Reagor, JJ Arcega-Whiteside, and Quez Watkins are not realistic volume threats in this league.

DeVonta Smith is likely to heavily improve as a sophomore, but the draft-day acquisition of A.J. Brown makes it even more likely the Eagles return to a more pass-heavy offense. Howie Roseman would not give up a 1st and 3rd round pick and guarantee $57 million to a player they won’t be able to utilize effectively (unlike the Giants and poor Kenny Golladay).

Combine that with the high likelihood of their 2022 shaping up differently than the hugely anomalous 2021 schedule, and Hurts is one of the biggest winners of the NFL draft season.

After finishing as last year’s RB5 in his age-26 season, Conner somehow has significantly less touch competition than he did last year. We know Chase Edmonds has taken his talents to South Beach, but many expected the Cardinals to be in the hunt for another starting-caliber running back through the draft.

The Cardinals settled on drafting power-back Keaontay Ingram… at pick 201. As it currently stands, Conner’s only real backfield competition comes from rarely-used Eno Benjamin and the aforementioned Ingram. Unless Benjamin comes out of nowhere to take some of the receiving work, we forget just how valuable Conner was during the 2nd half of the season as a pass-catcher:

This also correlates with DeAndre Hopkins being injured, and he is suspended for the first 6 games – not to mention he was already starting to show signs of decline with his age and usage coming full circle. A.J. Green and Zach Ertz are yet another year older, Christian Kirk is in Jacksonville, and while the Cardinals did acquire Marquise Brown he is not the volume receiver that Hopkins proved to be.

Conner’s age and injury history are definite red flags, but his lack of competition and WR2-level receiving production would argue that he is still undervalued despite his rising ADP:

James Conner RB finishes in half-point scoring during weeks w/o Chase Edmonds in 2021:

Apparently, Mark Andrews took offense to being the 4th TE off the board in 2021 fantasy drafts after a slightly disappointing 2020. He stormed back with a consistently excellent TE regular season and went on to be a league-winner during the stretch run: from Weeks 14-17, he put up a 34/465/4 compilation during the most important stretch of the fantasy season.

Gone are Miles Boykin, Sammy Watkins, and Marquise Brown. Indeed, per our friends at 4for4, the Ravens have the 4th most vacated air yards and targets from 2021. His main target competition will come from Rashod Bateman and an unproven combo of Tylan Wallace and Devin Duvernay. The Ravens drafted a couple TEs (they always utilize multiple TEs) but neglected to draft a single wideout.

Not only is this important for Andrews’ raw volume, but we need to contextualize last year’s insane production within Lamar Jackson’s offensive historical averages:

Mark Andrews had 154 targets after a previous season-high of 98 pic.twitter.com/yd97UB0msY

The Ravens clearly want to run the ball more when they have a healthy Lamar Jackson, J.K. Dobbins, and Gus Edwards. However, Andrews’ target competition shrank so much this offseason that he may still be able to lead the league in TE targets. We also know his ceiling is completely unaffected by Lamar Jackson’s health (see Huntley, Tyler), while his floor is that of a top-four TE.

I prefer to look at it this way:

With tight end perennially shallower than the market realizes and the massive advantage elite production gains fantasy teams, a Mark Andrews without Marquise Brown has definite value anywhere after the Round 1/2 turn. He is one of the definite 2022 NFL Draft winners.