Being drafted as WR47, the expectations from fantasy drafters for Allen Lazard are criminally low. Fantasy owners want the shiny new toys – leading fantasy owners to select Christian Watson at a similar price (WR49). Let’s look at why Lazard  – not Watson – is the Packers’ wide receiver to target in 2022.

Allen Lazard As A Prospect

Lazard was an exciting prospect entering the NFL. Although we don’t like that he was a four-year player Lazard was at least involved as a freshman, reaching a 17 percent dominator rating.

He broke out as a sophomore at 19.7 years old (70th percentile breakout age). Lazard finished his sophomore year with an excellent 36 percent dominator rating. Despite playing as a senior, he dominated – finishing with a dominator rating of 32 percent or more in his last three collegiate seasons. In terms of production, Lazard was an impressive college player.

As an athlete, Lazard is a beast. Running a 4.55 forty at 225 lbs., Lazard has an 88th percentile speed score. His size/speed combination makes him a difficult cover for cornerbacks. He also has an above-average burst score.

Despite his impressive production and athleticism, Lazard went undrafted.

Allen Lazard As A Pro

In the NFL, Lazard has averaged 9.1 yards per target. Per RotoViz’s AYA app, he has been one of Aaron Rodgers’ most efficient weapons. 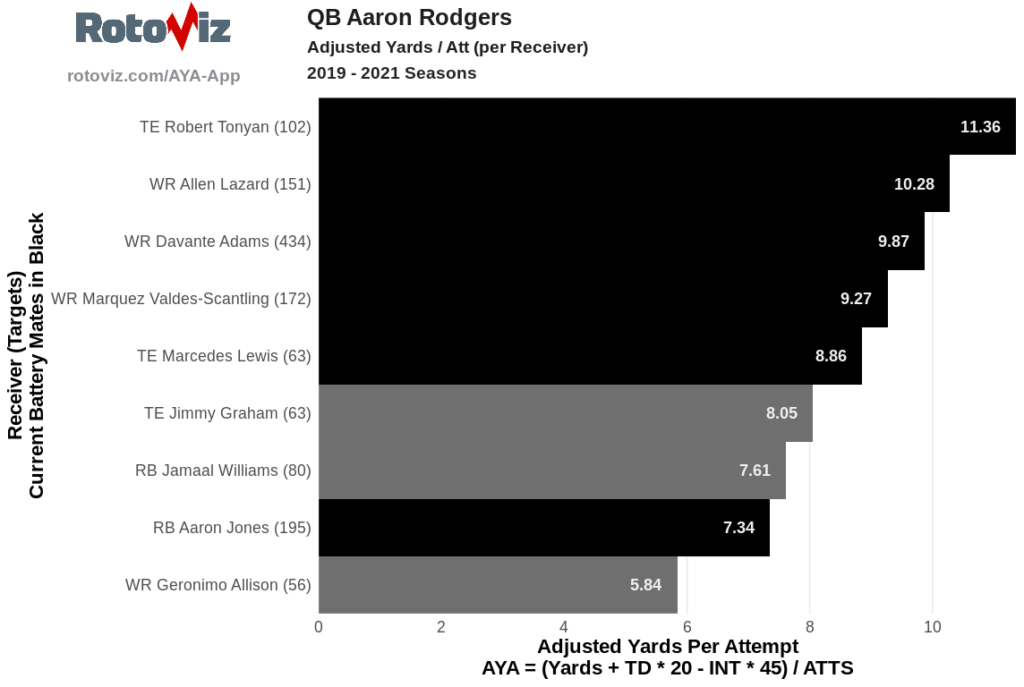 Highlighted by impressive per target efficiency and an excellent touchdown rate, producing when targeted has never been the problem for Lazard. He has simply lacked volume.

With the departures of Davante Adams and Marquez Valdes-Scantling, there are 224 vacated targets from 2021. In the past two seasons, Lazard has played one game without Adams – he finished with six catches for 146 yards and a touchdown. 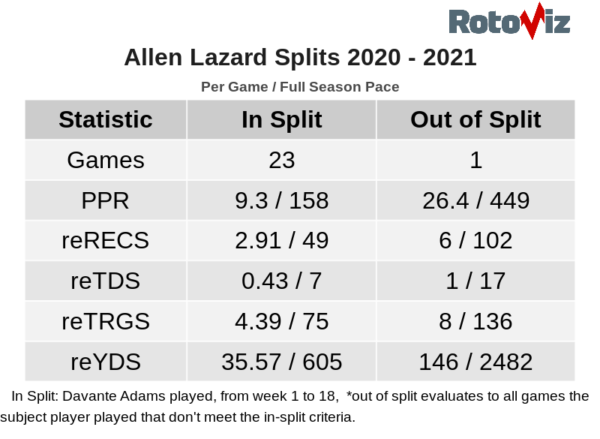 Lazard has the profile, production, and opportunity to expect a leap in production in 2022.

But What About Christian Watson?

Christian Watson made a name for himself with an impressive combine, running a 4.36 forty at 6’ 4” 208 lbs. There’s no question that he’s a freak athlete. But did he produce in college?

Despite playing outside of the Power 5 conferences, Watson redshirted his freshman year and didn’t truly dominate until he was an older college player. This doesn’t doom him but decreases his probability of hitting. His rookie age (23) also makes Watson less likely to hit in his first season. While we know it doesn’t matter, it also doesn’t help that beat writers are calling his hands “questionable”.

How Does Aaron Rodgers Treat Rookies?

Despite several players who had excellent careers, Valdes-Scantling is the only receiver to top 500 receiver yards. Davante Adams, Randall Cobb, and Jordy Nelson all struggled to be consistently productive as rookies and they were better prospects than Watson.

The odds of Watson becoming the first productive rookie fantasy receiver with Rodgers are low. The rumors of Rodgers’ history of freezing out rookie wide receivers appear to be validated by a lack of rookie receiving production.

Aaron Rodgers is going to be productive as a passer this season. Lazard has proven to be a productive and reliable NFL wide receiver and appears most likely to benefit from the 224 vacated targets. The threat of Watson appears to be overblown as rookie wide receivers have consistently struggled to produce with Rodgers. If you’re looking for the discount Gabriel Davis, look no further than Allen Lazard.