Finding 2022’s Cordarrelle Patterson may not be as difficult as it may appear. The first-round bust turned fantasy football darling’s path to relevance was a unique one, but what can it teach us about finding valuable running backs in our 2022 fantasy drafts?

Looking in the rearview mirror, the most obvious signal of a 2nd Atlanta RB’s relevance was the presence of Mike Davis atop the depth chart. Here we had a running back who – despite a 5th(!) round 2021 ADP after filling in for an injured Christian McCaffrey in 2020 – checked all the following boxes:

Remember: it’s no coincidence we see a vast amount of turnover in the fantasy RB ranks from year to year. Running back is an incredibly high-variance position, where there are usually multiple fantasy-relevant players who were mere no-names or afterthoughts in the summer. As NFL teams get smarter about investing fewer valuable draft picks or free agent dollars on running backs due to their injury risk and quickly diminishing value, this trend is only more likely to continue and grow.

It is abundantly clear that as far as landing spots in the NFL draft, Dameon Pierce is a winner:

Breece Hall stands above in a tier of his own. The biggest value could be Dameon Pierce, whose landing spot provides lead-back opportunityhttps://t.co/QABOaIcqcb pic.twitter.com/2mmkXduEg6

But who will he have to surpass to climb the depth chart?

Signed to a one-year deal, Marlon Mack has not been the same after tearing his Achilles and subsequently lost his job to Jonathan Taylor the following season. He is an uninspiring 26-year-old veteran who should not be difficult to supplant. Mack spent most of last year as a healthy scratch behind Taylor and Nyheim Hines, gaining a paltry 127 yards on a grand total of 32 carries in 7 games since his catastrophic 2019 injury.

Rex Burkhead, meanwhile, will be 32 in July and had a career-high 122 carries last year – solely due to the injuries to David Johnson and in-season departures of Phillip Lindsay and Mark Ingram. His rise to the starting position was as unlikely as any in recent history. He will be relied upon for mainly third-down duties, as he has for his entire career: he had never carried the ball more than 74 times in a season before 2021.

Pierce, a prospect with limited measurables but incredible efficiency in small sample sizes, had a much more explosive 2021 than most realize:

Dameon Pierce to the Texans is an awesome pick. He'll compete for a big role on Day 1.

Besides Hall and Walker – Pierce was my guy in this class. 4th in Yards Created per attempt, 2nd in missed tackles forced, and his pass blocking tenacity will earn him trust immediately. pic.twitter.com/cpixdwObQY

Both Mack and Burkhead hit nearly every point on the “Mike Davis” checklist, and Pierce is worth a stab at his current ADP of 11.09 as the RB40.

Perennially among the most polarizing assets in the fantasy football community, the “RoJo” truthers and deniers will certainly go to battle once again in 2022. But let’s take a closer look at the only man ahead of him on Kansas City’s depth chart.

The statistics back up the notion that Clyde Edwards-Helaire has been among the worst goal-line converters in recent memory. His 2020 rookie season was actually record-setting: he became the only runner (out of a whopping 88 qualifiers) since 2017 to have 9 or more rush attempts inside the 5-yard line, and convert less than twice.

The Chiefs learned their lesson: last season, he received a grand total of 2 such carries, ceding valuable touches to the likes of Darrel Williams (now gone) and “Derrick Gore”. The Chiefs can make 2022 the last year of his contract, as they would save $2.3 million if they cut him next summer.

Enter the much-maligned Ronald Jones, who could never quite stay in the good graces of mistake-allergic perfectionists like Tom Brady and Bruce Arians. Jones, however, is younger than you think (only turns 25 in August) and has flashed elite inside-running ability:

Bucs running back Ronald Jones has been among the most efficient rushers in the NFL this season on runs between the tackles.@rojo gained +239 rushing yards over expected on inside runs during the regular season, 2nd-most in the NFL (behind Derrick Henry, +296).#SBLV | #GoBucs pic.twitter.com/PoAxFpxEQD

Let’s also point out that while Patrick Mahomes’ passing volume didn’t change much in limited action without Tyreek Hill (now in Miami), his ability to successfully throw the ball into the endzone did. They could certainly use another way to score touchdowns: 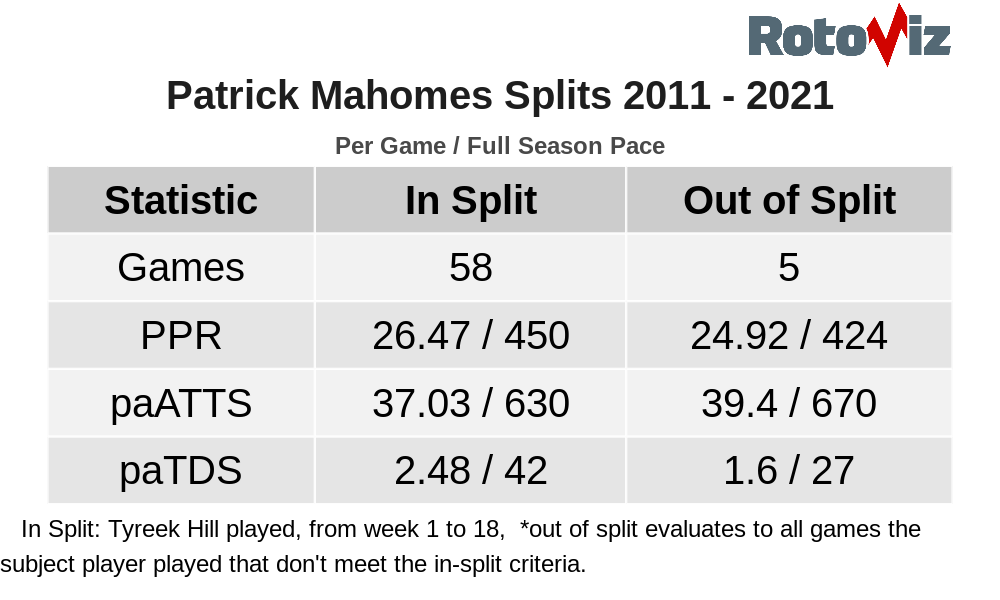 As the early favorite for early-down and goal-line work with precious little talent behind him, Jones represents the chance to bet on an elite inside-runner on a guaranteed great offense that desperately needs a goal-line back. Kansas City has the 9th-most available carries heading into 2022, along with a league-high 14 carries inside the 5-yard line. This is an absolutely mouth-watering opportunity.

Clyde Edwards-Helaire will likely monopolize passing downs and has excellent draft capital, but that far from justifies his 7th-round ADP. Ronald Jones seems like a must-draft in the 11th round as an excellent candidate to be 2022’s Cordarrelle Patterson.

Before his decent-if-uninspiring junior collegiate season, Benjamin was considered a Day 2 lock in the 2020 NFL draft as his record-setting sophomore production (1,801 total yards and 18 TDs in 13 games) left dynasty leaguers licking their chops. Here is what our own Dalton Kates had to say about him before the 2020 draft:

“Eno Benjamin has to be the single most undervalued player in this draft. First and foremost, he profiles extremely well for future RB1 production.

Benjamin’s sophomore season is a unique one. Only nine other college players ever have rushed for 1,600+ yards at 5.5 yards per carry and caught 35 passes. Four of those players had top-three-round draft capital and all four became an RB1 in the NFL.

Benjamin fits in the mold of an Aaron Jones, Giovani Bernard, and Duke Johnson-type back. He certainly offers a three-down skill set and could be the arbitrage play to Clyde Edwards-Helaire in this draft.

It remains to be seen if the NFL team he goes to will view him as a workhorse or just a committee back. Regardless, he checks the minimum thresholds we look for in a running back and should easily outperform his current ADP.”

He’s unfortunately made zero noise since being drafted in the 7th round in 2020, but the lack of Cardinal RB transactions this offseason has him as a very intriguing buy: after letting third-down/change-of-pace back Chase Edmonds walk, many assumed they’d add another do-it-all veteran behind James Conner. Instead, they waited until the 6th round to draft power-running Keaontay Ingram – a direct backup to Conner.

Although Conner has a mouthwatering ceiling and is a potential value in drafts right now, he is a 27-year-old RB who has missed multiple games every season of his career. Benjamin profiles as a perfect replacement for Chase Edmonds (42 receptions in his junior college season, 35 as a sophomore) – a role that saw an average of over 11 carries and nearly 5 targets per game in 11 full games last year.

With the absence of DeAndre Hopkins (suspension), the aging pass-catching depth behind Marquise Brown and the ever-looming possibility of a James Conner injury, Benjamin has a considerable floor to go along with a low-end RB1 ceiling.