Smart fantasy owners think about players in a range of outcomes that assign probabilities to a variety of results, not in one simple projection number. With some help from our friends at RotoViz, how can “range of outcome” models help us project this year’s sophomore wide receiver class?

The RotoViz “Range Of Outcomes” App

To assist us in an effort to measure the floors and ceilings of players, we will use RotoViz’s “Range Of Outcomes” app. You can read about how it works in detail here, but basically, the app takes a player’s statistical output for a given season and searches for similar recent historical seasons. For example, the app may show that Antonio Brown’s 2014 season (or his “N” season) was very similar to Cooper Kupp’s 2021 on a per-game basis. To help project Kupp’s range of outcomes in 2022, we can look at how Antonio Brown performed the following season (2015, or his “N+1” season).

Editor’s Note: If you do not have a subscription to RotoViz, we highly, highly recommend considering signing up. They are consistently at the forefront of actionable fantasy football-focused analytics.

This means that the app will find similar seasons to how 2022’s most valuable sophomore wide receivers performed as rookies, and then show how those similar players performed in the year afterward.

However, the app does not take any personnel moves into account. This means that we will have to add qualitative context and analysis to these numbers, so take these projections with a grain of salt – especially if the team has added or lost passing game weapons from 2021.

There is some terminology to become familiar with before we begin:

“N+1” Season: This is the season after a similar historical season (again, the “N” season).

HDS: Historical Distribution Score. It is calculated by adding and subtracting points for the number of similar N+1 seasons that meet (or don’t meet) a certain point threshold and is described in detail at the bottom of this page. Basically, the higher the number, the higher the odds (per historical trends) that the player has an elite, ceiling-level season the following year. To give some context, Cooper Kupp’s pre-2022 “HDS” is 139, and Kenny Golladay’s is -7.

To get down to the cream of the crop, we’ll look at the six sophomore wide receivers who are going in the first eight rounds of ADP. We’ll also narrow it down to the 10 “most similar seasons” per player.

*Denotes that a player’s PPR points per game was used, as the player missed multiple games.

You don’t need anyone to tell you to draft Ja’Marr Chase. His similar players are riddled with superstars, and only Mike Evans’ and Allen Robinson’s aberrational early seasons make this list look anything less than elite. He’s the 1.01 in 1 QB dynasty leagues and is a value anywhere after the first six picks in redraft.

His medium ROO (range of outcomes) is almost as high or higher than anyone else’s high ROO, and his HDS suggests that an all-time-level 2022 season is in play.

Looking like the real deal as a rookie, Waddle’s comps are rightfully excellent. Singlehandedly putting the Dolphin’s passing game on his back at times, Miami has since added Tyreek Hill, Chase Edmonds, and Cedrick Wilson.

There’s no doubt that these acquisitions hurt his chances for a high-end WR1-type breakout – Tyreek Hill is going to see at least as many targets, and we simply don’t know how good Tua Tagovailoa actually is. Regardless, Hill should help keep defenses honest and improve Waddle’s efficiency. Waddle will have a high floor in 2022 with a chance for a massive ceiling if Hill gets hurt or Tagovailoa lives up to whatever hype he has left.

All this suggests his ceiling is probably lower than the HDS suggests, though he did show the ability to be a high-volume player as evidenced by the Moore, Thomas, and Edelman comps – something we weren’t sure of coming out of college. We assumed he was mostly a big play, finesse wideout like T.Y. Hilton or Emmanuel Sanders, so seeing a variety of player types is encouraging.

His late 3rd round ADP (WR16) in redraft leagues seems fair, though I’d stop short of calling it a value. Oddly enough, the acquisition of Hill and the continued unknown of Tagovailoa may actually present the best dynasty buying opportunity you’ll ever have on him.

The model doesn’t think very highly of Bateman – he’s the only player on this list that his top 10 closest N+1 seasons do not include a WR1 finish. However, nearly half finished as WR2s, showing a decent floor. With a poor HDS, it’s clear that the ROO tool doesn’t love him. Regardless, the 2022 situation will be so different from his 2021 experience that we cannot jump to conclusions.

Not only are Marquise Brown and his 146 targets now in Arizona, but Lamar Jackson is back. While Mark Andrews was on a Cooper Kupp-like pace (seriously) with Tyler Huntley, Bateman was far better with the 2019 MVP: 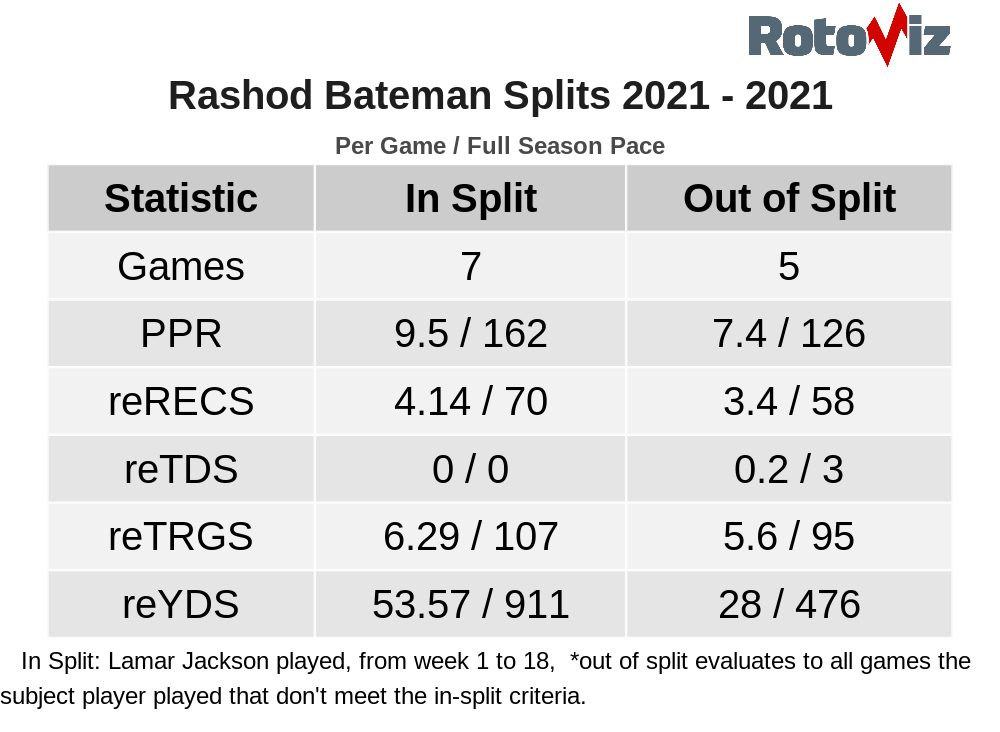 Despite the poor ROO numbers, his comparable players actually seem pretty accurate. They’re mostly players with excellent collegiate production profiles who, with the exception of Hopkins, never (or haven’t yet) turned into more than an above-average fantasy asset – you may remember these players as being more consistently good than they actually were. As the model shows, a huge ceiling is going to be hard to come by.

The tool doesn’t register the context of Bateman’s profile. A first-round pick with excellent college production, there are reasons for optimism outside of his mediocre rookie season.

He may not be an upper-level talent that can force the issue with sheer playmaking efficiency a la A.J. Brown or Ja’Marr Chase – he’s going to need a ton of volume to be a true difference-maker. Although Jackson is returning, this is an offense that has been pretty clear about wanting to return to their run-heavy ways. Without Brown, the expectation is the targets will be heavily concentrated on Andrews and Bateman.

In some ways, the polar opposite of Bateman, St. Brown’s rookie season broke perfectly in his favor. Tyrell Williams, Quintez Cephus, T.J. Hockenson, and D’Andre Swift all missed multiple (if not every) one of the final seven games, where St. Brown averaged 10+ targets per game. As the target hog on one of the worst teams in the league, he benefitted from plenty of shootouts and garbage time.

But we must give credit where credit is due: the man produced, and his rookie year production combined with his early collegiate breakout age puts his career on a promising trajectory. Diggs, Allen, and Landry all had excellent age-adjusted collegiate production profiles but like St. Brown, didn’t stand out or even struggled athletically.

We know 2022 is going to be different: the Lions enthusiastically drafted Jameson Williams early in the 1st round of the draft and signed D.J. Chark. Hockenson and Swift will demand some looks while Kalif Raymond and Cephus return to siphon ancillary targets as well. The Lions also shouldn’t be nearly as bad on defense as they were last year, either.

It’s absolutely fair to poke holes in St. Brown’s rookie breakout and sophomore projections: after all, his ROO numbers are nearly identical to Waddle’s, and Waddle (with sound reason) is three rounds more expensive. It isn’t out of the question that St. Brown simply continues to produce and has a Jarvis Landry-esque career arc. Just don’t expect a consistently explosive player the Brandin Cooks comp suggests.

One of last year’s production darlings, Moore put up elite age-adjusted stats and blazed a 4.35 forty at the combine. He gained decent draft capital, but could he produce in the pros? Take a look at how he was performing last season in his final six games before going down with a quad injury: 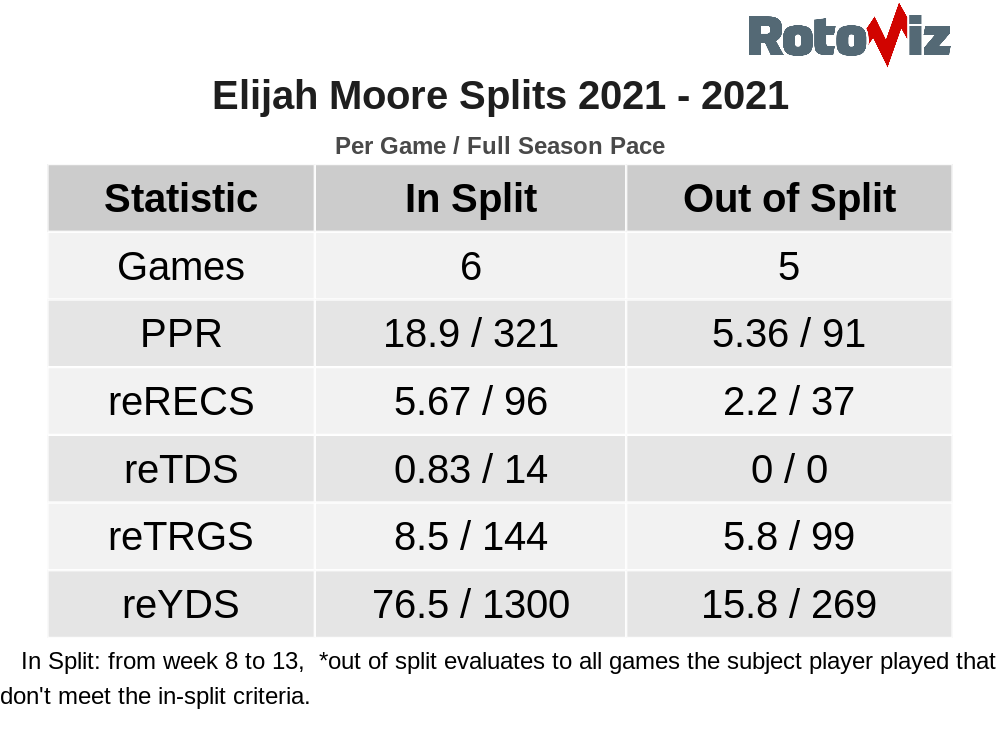 Indeed, he was the overall WR5 during that stretch of the season. Moore is a high-end college producer with incredible athleticism who showed elite playmaking skills as a rookie… so why don’t his projected numbers look better?

One issue is his size – even though wide receivers are getting smaller, 178 lbs is still tiny. He did, after all, get injured just as he was getting on a roll. We also have to remember he didn’t show much chemistry with Zach Wilson and they spent a top-10 pick on Garrett Wilson.

When held in context with Chase and Bateman, his ROO numbers seem pretty fair, though one could argue such a great collegiate producer and athlete has more upside than some of his similar players. There is another promising sign for Moore: his age. 20-year-old rookie wide receivers clearly have far better outlooks than their older cohorts, and the 2021 class has two notable ones: Chase… and our friend Elijah Moore.

None of his comparables (besides Metcalf) has had a high-end WR1 season, but are full of solid producers across the board. T.Y. Hilton is an excellent comparison for him, and you’ll likely have to make a choice between Moore, St. Brown, and DeVonta Smith if you’re taking a wide receiver in the 6th round.

Smith’s 7.5 PPG gap between his low and high projections is the largest on this list, and that seems fitting for a player who will continue to be polarizing in the fantasy community.

The ultimate example of size/age vs. production (though his size is less of a big deal than you’d think), Smith did enough as a rookie to earn the above comps. Make no mistake though, there were plenty of similar players who busted in N+1, or else his HDS and low projection wouldn’t be so mediocre.

Again, Smith seems destined to be a divisive selection. Like Waddle and the arrival of Hill, the A.J. Brown trade likely takes a truly huge season out of the picture – though Brown has proven less than durable over the years. Can Jalen Hurts even support two great fantasy wide receivers? Will they truly pass more?

Likewise, the upside is tantalizing: players with Smith’s draft capital and college/rookie year production have to be taken seriously. He could be special, and he is an excellent way to get a cheaper piece of this exciting Philadelphia offense. If the Eagles pass more frequently and Smith receives less defensive attention, the drop in price due to Brown could be ideal for fantasy owners.