Two Unprecedented Talents To Load Up On

When historically impressive talents come around, we must take notice. It’s rare that in the same draft class we have two players who were so impressive as rookies that they achieved unprecedented results. These are the type of players that you want to select or try to acquire in every fantasy league, as they are likely to get even better despite their already-high cost.

Obviously, as a first-round pick, fantasy owners recognize that Ja’Marr Chase is one of the league’s best wide receivers. However, I’m not sure that owners recognize just how special he is from a historical standpoint.

This is a list of the best rookie wide receivers ever. Randy Moss scored the most fantasy points per game and impressively achieved this in a season in which passing rates weren’t as high as they are today. Odell Beckham somehow had the most targets and catches in just 12 games.

These are the type of unique seasons that are so impressively rare that we must value them uniquely. Not only did Chase have one of the best seasons ever but the context in which he did so was incredible.

Chase sat out for an entire year prior to having one of the four best rookie wide receiver seasons ever. In addition, owners must recognize that considering Chase’s profile, his rookie year was not that surprising. He was that good of a prospect. When you consider Chase was legitimately in the all-time tier of prospects and had one of the best rookie wide receiver seasons ever, he’s the exact type of player that you want to select as a first-round pick.

Now with a full offseason to prepare and the obvious boost that sophomore wide receivers automatically receive, the sky is the limit. That is said frequently for fantasy players but with Chase, it’s actually true. You could make a case for selecting Chase at the 1.01 and it’s an absolute blunder if an owner allows him to slip out of the top five.

Despite how unique Chase is, Pitts has even more unique of a profile. Pitts had 68 catches for 1,026 yards as a rookie tight end. Infamously he managed just one lone touchdown, but you should be rejoicing in this fact for 2022 ADP purposes.

When making selections at the top of fantasy drafts, we want to select unicorns. Players that are so unique that if they had the best seasons ever at their positions, it wouldn’t be that surprising. Throw in the fact that we’re receiving a discount because Pitts hasn’t finished as a top tight end before (yet), and it’s tough to imagine receiving a better deal.

One more note: the addition of Drake London to the Falcons is good for Pitts. Commonly fantasy owners are concerned about players losing volume, but receivers need other players who can help occupy the defense’s attention. Pitts was more productive last season when Calvin Ridley was active, and outside of London there aren’t exactly a ton of other mouths to feed on Atlanta. 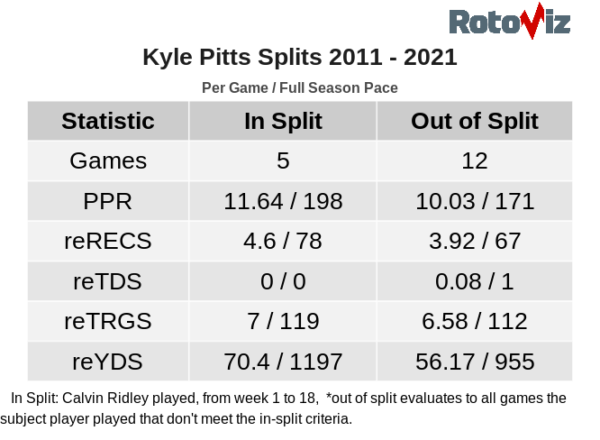 There are reasons why our 2021 dynasty draft guide ranked Chase and Pitts over Najee Harris. Chase and Pitts are unique, special players who could be among the best at their respective positions when they’re done playing. Hop on the bandwagon while you still have time.