Elijah Moore is so fun to watch that he makes football more enjoyable (even when watching the Jets!). From Week 8 to Week 13 last season, he was the overall WR5. That’s extraordinary enough for a rookie to make him sound impressive. Now consider that he was catching passes from FOUR different quarterbacks, Mike White, Josh Johnson, Joe Flacco, and Zach Wilson, during that six-game stretch.

As shown in the attached image of the tweet, Moore was so good despite poor quarterback play, that he had superstars like Larry Fitzgerald, CeeDee Lamb, Tee Higgins, Dez Bryant, A.J. Brown, A.J. Green, and Calvin Johnson listed as comparable players.

Moore’s domination isn’t new either – he was an excellent college player. This is what I wrote about Moore in the Apex 2021 rookie guide:

“When it comes to prospects, production is everything. This is why Elijah Moore is one of my absolute favorite prospects in this class. This old RotoViz decision tree by Kevin Cole likes WRs who had 29% of career market share of receiving yards and final year market share of receiving yards of 42% or more. In this class only Rashod Bateman, Elijah Moore, and Tylan Wallace clear the production hurdles to be in the top receiving bucket.”

His age-adjusted production made him an excellent player to target last season but that wasn’t the only part of Moore’s profile to like. Moore combines a 4.35 40-time with a 97th percentile agility score – he has the athletic traits to suggest that he is a special player. The only reasonable knock to Moore’s profile has always been weight, which didn’t seem to bother him at all as a rookie – besides, elite wide receivers are getting lighter and lighter.

If my analytical enthusiasm isn’t enough, consider Matt Harmon’s. Matt charts wide receivers on his popular website Reception Perception and was downright giddy when discussing Moore on John Paulsen’s podcast. As a rookie, he displayed the ability to challenge defenders and eat up space with his speed and keep them off-balance with his agility and fluidity.

Currently, the skepticism for Moore is largely attributed to Zach Wilson which is very reasonable. Wilson could certainly limit Moore’s production with terrible quarterback play. But Moore will draw targets regardless and should be featured heavily. In the middle of the sixth round, I’m more than happy to take the risk and bet on Moore’s extraordinary talent.

As mentioned above, Rashod Bateman was an excellent college player. An above-average athlete, Bateman had a 98th percentile college target share and a 93rd percentile breakout age. What correlates most with PPR points is draft position and college production, Bateman passes both with flying colors.

His rookie year was not as productive as we would have liked. He missed the first five games and play in over 70 percent of the snaps until Week 15. But it’s telling that the Ravens were willing to deal Marquise Brown to give the 22-year-old Bateman the opportunity to shine.

Alongside Mark Andrews, Bateman will undoubtedly be featured with a significant target share. It’s promising that he was much more productive with Lamar Jackson. 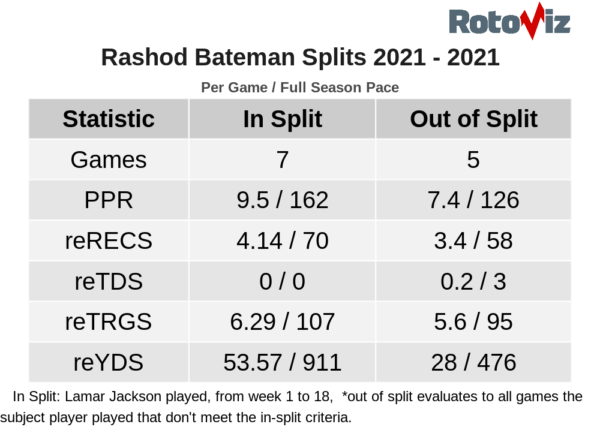 Here’s what Andrews had to say about Bateman in June:

“He’s running great routes,” Andrews said. “A lot of his releases, he’s getting open at the line super quick. Then he’s got a burst of speed that people really don’t talk about. Second year, he’s a guy that’s just going to get better and better. The sky’s the limit for him.”

While the Ravens will likely shift to a more run-heavy offense, the targets will likely be hugely concentrated on Bateman and Andrews. Passing the ball against a defense that will be concerned about stopping the run will give Bateman hugely favorable opportunities for valuable targets.

Generally, I believe most fantasy owners are overly concerned about wide receivers having other threats in the passing game. While the addition of A.J. Brown certainly hurts Devonta Smith from a target share perspective, it shows a potential shift in offensive philosophy for the Eagles.

Even if there is a wide receiver that is better than Smith on the team, the Eagles’ investments in the passing game will keep them from shifting back to a run-heavy offense. The addition of Brown will also shift offensive attention away from the budding star Smith.

While there were questions about Smith’s profile (size and age concerns) coming out of Alabama, they were largely answered in Year 1. Using RotoViz’s Screener to find comparable players like this, it’s hard not to be excited about Smith. 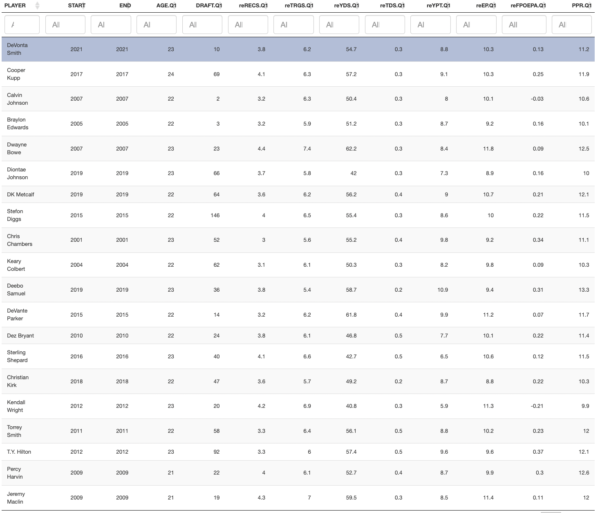 While Smith comes with concerns, like most of the wide receivers around his ADP, he has a decent chance to be a special player. After his ADP, the wide receivers with his type of upside have largely evaporated. If A.J. Brown can help the Eagles become a more efficient passing offense, the two could become one of the better duos in the NFL.