As much as we love talent, projecting available carries for particular players is as fruitful an endeavor. Whoever is getting the touches is going to score the fantasy points, and roster turnover generates fantastic year-to-year opportunities in fantasy drafts.

What exactly are available carries? Simple: look at the running backs who departed from a team during the offseason, and total how many carries (and carries inside the 5-yard line) they received in 2021. Luckily, our friends at 4for4 have already done this work for us – if you do not have a subscription to them, we suggest you consider purchasing one (we get no fee or affiliate commission – they are simply a quality fantasy football website, especially for the accuracy of their rankings).

We’ve already analyzed available targets for wide receivers here, so let’s dive in and explore all the teams who are coming into 2022 with 100 or more available carries:

Like a couple of the teams in this article, the Ravens’ large number of available carries is mostly injury-based. After the freaky preseason injuries to Gus Edwards and promising sophomore J.K. Dobbins (and later, Lamar Jackson), the Ravens finished 9th in pass attempts after finishing dead last in 2020.

When considering Lamar Jackson’s running prowess, 325 available carries may not be as much as they seem in Baltimore. However, we know they are looking to return to a more run-heavy offense so there may be “hidden” available carries outside of what is explicitly listed: the Ravens averaged over 4 fewer carries per game last season than in 2020.

While the Ravens may look to manage their top runners’ workloads early in the season, J.K. Dobbins looks like a potential steal at his current ADP. He’s going to be a full-year recovered from his injury, and looks to be recovering nicely.

It’s also worth mentioning that the Ravens have 12 available carries inside the 5-yard line – 2nd most in the league. With the Ravens more incentivized than ever to protect Lamar Jackson, whichever running back receives the goal line carries is going to carry some serious fantasy upside.

Rookie Dameon Pierce is certainly the one to keep an eye on, as he has only veterans Marlon Mack (age 26) and Rex Burkhead (31) ahead of him. Pierce is probably going to be a player whose breakout would occur in the 2nd half of the season, as Mack is expected to carry the mail early on.

However, we like betting on young running backs who have replacement-level starters ahead of them, and all of these guys have an ADP in the 12th round or later. You could do worse for a lottery ticket than Pierce.

The Rams’ running game is going to begin and end with the health of Cam Akers, who looked super promising a mere year ago. Looking nowhere near healthy in his still-unbelievable playoff return from torn Achilles in the summer, Akers no longer has Sony Michel breathing down his neck. He’s nearly a one-for-one replacement for their 225 available carries, health allowing.

The good news? You couldn’t ask for a much better offense to return to, and rookie Kyren Williams looks to be competition for Darrell Henderson more than anything else. It became pretty clear that Henderson is not cut out for feature-back duties last season, so Akers is going to have every chance to run with this job.

For what it’s worth, Akers is apparently 100% healthy, but you are paying a hefty 4th-round price tag for the privilege of finding out yourself. He is a quintessential boom-or-bust selection.

Many of these available carries are from now-Raven Mike Davis, whose ineptitude famously paved the way for 2021 cult hero Cordarrelle Patterson.

Strangely, the Falcons’ only additions at running back are Damien Williams and 5th-round rookie Tyler Allgeier. It was fun while it lasted, but Patterson is unlikely to get most of the running work again at age 31. Rumored to potentially be used as a true hybrid player, his  9th-round ADP reflects this.

Allgeier is an intriguing rookie who looks to be in a top-two spot on the depth chart, but Williams may take enough receiving work to render this an RB rotation on a bad offense – this running offense should be approached with great skepticism until proven otherwise.

Rookie Hassan Haskins is a poor man’s Gus Edwards, but this is the Derrick Henry show once again – he’ll lap up as many of those available carries as he possibly can. When Henry went down last year, this backfield turned into a mess of a committee – there is no reason to think things would be different if Henry goes down again.

Henry suffered a severe injury last season, and he’ll turn 29 in January after rushing back from a broken foot. He is a very risky selection at his mid-1st ADP.

The Giants have a very similar situation to the Titans: they’ll feed Saquon Barkley as long as they can on the ground as well as in the air. Their only viable backup is Matt Breida, but this is a guaranteed committee if Barkley goes down. There’s never been an opportunity question with Saquon, he simply needs to stay on the field.

The Dolphins’ had among the worst running backs in the NFL last season, but they’ve retooled and then some. Their signing of Chase Edmonds (and his current 9th-round ADP) is among our favorites of the offseason, and he is a cheap weapon that should be hammered in 2022 fantasy drafts:

The Dolphins also ranked 9th in the NFL in pass success rate when targeting running backs last season, and Edmonds shines in the passing game – he won’t have to receive all of those available carries to more than pay off at ADP.

Raheem Mostert is going to be their change-of-pace big play threat, but Edmonds is owed over six times more guaranteed money than him. Michel, even cheaper than Mostert, is likely only going to take over if injuries strike and as a rotational runner.

This is looking like it’s coming down to Rashaad Penny and Kenneth Walker, as Chris Carson’s career is in serious jeopardy due to his neck injury. This means that there is probably going to be enough work for both promising young backs.

Rookie Walker looks like a Nick Chubb-clone as arguably the most talented runner in this rookie class. Penny just now became cheaper than him in drafts, but they now both go in the 8th/9th round. In a division with Arizona, San Francisco, and Los Angeles, there is potential for the Seahawks to be breathtakingly bad enough to render both backs too inconsistent for every-week RB2 usage. This possible outcome, however, is at least baked into their price.

Although their offense looks absolutely moribund with a perenially-poor offensive line and Drew Lock “leading” the way, Penny and Walker are going to get plenty of work. Penny finished the year on an insane run, logging 671 yards and 6 TDs over his last 5 games on a mere 92 carries. Both Penny and Walker – a perfect fit for their scheme – are good picks at ADP. Even if their offensive line is horrendous, Walker shines after contact:

Highest percentage by a Big 10 RB since 2017 (min 200 carries)pic.twitter.com/lEUgvs9Lnx

Clyde Edwards-Helaire and Ronald Jones on one team: could it get more polarizing?

While he is certainly going to be limited to two-down work, we’re once again back on the Ronald Jones bandwagon:

But in all seriousness, even beat writers say he’s a “legit candidate” to start over Helaire. Andy Reid has already stated his desire for Jones to be a major part of the offense, and Jones is stepping into a mouth-watering opportunity: the Chiefs have a league-leading 14 carries inside the 5-yard line. If he can establish himself as the early-down and goal-line back on a Patrick Mahomes offense looking for playmakers in the post-Tyreek era, you’ve hit gold in the 10th round of your draft.

As far as Helaire goes, his 8th-round ADP is fair but there’s no guarantee Jerick McKinnon doesn’t give him a run for his money – he saw 48 touches in the Chiefs’ three 2022 postseason games.

James Conner is another player on this list who is going to get as much work as he can handle after the Cardinals’ Chase Edmonds walk this offseason. He was absolutely sensational as a fantasy asset during the 2nd half of 2022: 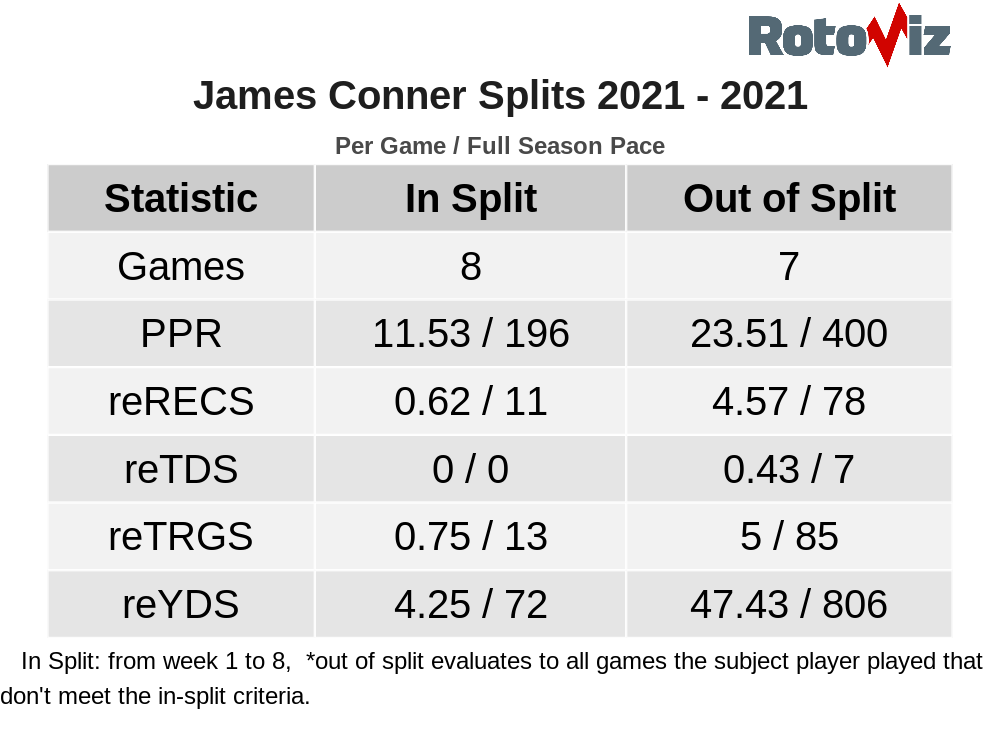 But let’s not sleep on a guy who is basically free in drafts: Eno Benjamin. He was an awesome producer at Arizona State, and coach Kliff Kingsbury called him one of the standouts at OTAs. He is absolutely a candidate to soak up most of the available carries and scraps Conner leaves behind, with a high-end RB2 ceiling if Conner goes down.

Make no mistake: James Robinson is awesome and coach Doug Pederson says he’s a three-down back when healthy, but as we saw with Cam Akers returning from an Achilles injury is no easy chore. This is especially true because Robinson suffered his injury late in the season – indeed, he is considered unlikely for training camp.

Enter our 2021 man-crush Travis Etienne, who is finally reuniting on the field with fellow 2021 first-round pick Trevor Lawrence. The 118 carries reflect the release of Carlos Hyde, but they don’t count the 164 carries Robinson logged – Etienne seems like a much safer buy than the similarly-priced Cam Akers.

Despite the quantity (not necessarily quality) of wide receivers in Jacksonville, it’s going to be tough to keep the ball out of the hands of Etienne – who could have returned at the end of last season and is already dominating the early competition:

Among my biggest takeaways on Tuesday: #Jaguars RB Travis Etienne looked like his old self. https://t.co/agHk9SbrQt

The Panthers are in the same boat as the Titans and Giants: their franchise running back is going to touch the ball as many times as possible. The only reason to avoid Christian McCaffrey in fantasy drafts is for injury concerns, and even that excuse is flimsy.

Also, what happens if McCaffrey gets hurt? We saw that Chuba Hubbard and Co. formed a committee that produced precious-little fantasy production. With Baker Mayfield only slightly upgrading the offense, newly signed D’Onta Foreman would likely rotate with Hubbard to form an underwhelming, desperation RB2/FLEX-level dystopia.

Much-maligned Ronald Jones is now in Kansas City, so the backfield situation in Tampa is very similar to the one in Arizona: their jaw-dropping 2021 running back reclamation project (Leonard Fournette instead of James Conner) is in an envious spot on a team long on quarterback production and short on other playmakers. Fournette’s late second/early third-round ADP is also similar to Conner’s, and there are a similar amount of available carries to be had as well.

We, however, would recommend pivoting to exciting rookie Rachaad White, a potential David Johnson-like talent with an 11th-round ADP. It wasn’t long ago that Fournette was a laughing stock in the fantasy football community, he’ll turn 28 in January, and Bucs coaches are already unhappy by Lenny arriving at camp at nearly 260 lbs. White doesn’t need an injury to potentially become Brady’s James White, and he’s one Fournette injury away from a huge ceiling: