Gone are the days of consistently finding late-round value at the quarterback position. Over recent years, drafts have become much more efficient at predicting the top quarterbacks, and those who have correctly predicted the QBs have been handsomely rewarded.

In my 2021 Fantasy MVPs article, I used PAA (Points Above Average) to find which players are provided the most value for fantasy owners. For the season, Josh Allen provided the 12th most value over the baseline average for the QB position. Allen, Justin Herbert, and Tom Brady all finished in the Top 19. Obviously not missing games helps, but it’s become difficult to compete in fantasy leagues without a solid QB. Even if we measure the points above average by game, all three finished in the Top 29. Look through the chart and you can see the value that a solid QB brings each week.

Now that we know how important QBs are, let’s look at how to attack the quarterback position using Underdog’s ADP this season. Price is still everything but pivoting to a quarterback whenever a targeted tier evaporates is a fun yet effective way to attack the position. Generally, I’m considering this top tier when the other members of the league are intentionally fading QB.

The Cream of the Crop

Obviously, there’s a point that I would draft Josh Allen and Justin Herbert but considering the average prices this season, I find Lamar Jackson to be the first significant value. In 2019, Jackson scored 30.3 fantasy points per game in his MVP season. Over the past three years, no other player who has played at least six games has averaged more than 28.1 fantasy points per game.

The rumors of the Ravens returning to a run-heavy offense are obviously a boost to Jackson’s fantasy value. The most rushes of his career came during his 2019 season. While Jackson is a phenomenal player, this strictly comes down to price. Selected nearly two full rounds after Josh Allen, Jackson is also selected after Herbert and Mahomes. If you remove Jackson’s Week 14 injury game, he averaged more fantasy points per game than Mahomes last year and nearly matched Herbert to the decimal. I’m happy to take the discount in what I expect to be a bounce-back season.

Like in 2020, it was the tale of two seasons for Kyler Murray in 2021. While he finished 5th in QB scoring per game, Murray was averaging 27.51 points per game through the first seven weeks. Josh Allen led all QBs in scoring last year by averaging 27 points per game. It was a similar story in 2020 when Murray averaged an incredible 32.33 points per game over the first nine games of the season. 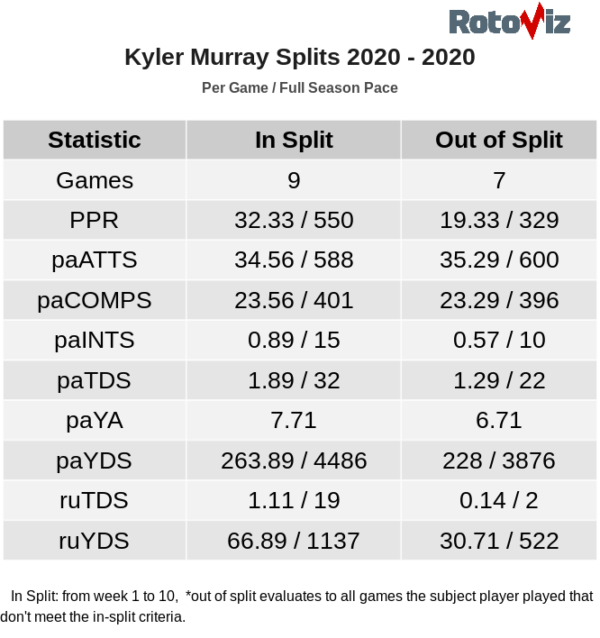 One of these seasons, Murray is going to run hot for the entire year. If that happens this season, he’s going to be a league-winning selection. While it’s a premium pick, the 59.6 average draft position is palatable – especially in a draft room that is de-valuing the QB position.

The trend that you’re likely noticing with these quarterback targets is their rushing ability. The Konomi Code just adds an element that is difficult for even the best pure pocket passers to keep up with.

Like Lamar Jackson in 2019, we don’t really know what we’re going to get from Lance this year. But we know he’s going to run. While Lance may not be as good as Jackson, it’s hard to argue that any of the QBs selected after him have anywhere close to as much upside as he does. We want to have that league-winning upside in our target’s range of outcomes. Remember, only one team wins each fantasy league. You must take risks to win.

In his two starts last season, Lance showed tantalizing upside. My exuberance for Lance in 2021 has not waivered and he remains a key target this season.

While Derek Carr doesn’t fit my typical mold for a quarterback target, he provides a cheap safety net. Although he threw just 23 touchdowns in 17 games last season, Carr finished as the QB12. History (and Rich Hribar) tell us that it’s likely Carr will see positive regression:

Since 2010, of the 42 teams to kick a field goal on over 50% of their scoring plays, those teams have averaged an increase of 9.4 more offensive touchdowns over the year prior.”

Positive regression is coming, and Carr was good last year. In terms of yards per attempt, he finished 6th in the NFL. Out of the five ahead of Carr, only Jimmy Garoppolo isn’t being selected ahead of him in fantasy drafts.

With a healthy Darren Waller, Davante Adams, and Hunter Renfrow, Carr will easily have the best weapons of his career. Although quarterbacks can be excellent on their own, pass-catchers matter and could make a huge difference for Carr in 2022. In a division with the Chiefs, Chargers, and Broncos, the Raiders will surely be involved in plenty of shootouts and negative game scripts.

It’s funny to think that last year Justin Fields was selected as QB15 and this year he’s moved back a spot to QB16, even though we know he’s starting. It’s certainly reasonable: the Bears didn’t look capable of coaching a player like Fields, and Fields didn’t look the part for long stretches of 2021.

And then at the end of the season, Fields got going. These are his final five starts:

In Week 11 against the Ravens, Fields left the game with an injury. If you average the other four starts, Fields averaged 23.65 fantasy points per game. That would be good for the 6th highest points per game output last season.

Obviously, this is a small portion of the season, but the expectations we put on Fields as a rookie are likely unfair and probably shouldn’t be used against him. Especially the emotional bias that some owners surely cling to. There is still a chance he’s the superstar that fantasy owners were so excited about last season. If you’re willing to pay an 11th-round pick to find out, you could be rewarded handsomely for HODLing.