Imagine you’re drafting in the middle rounds, and you need some cheap potential target magnets at wide receiver. You didn’t plan for the draft to go this way: you realized that wide receiver is quite shallow in 2022, but you couldn’t pass on Jonathan Taylor at 1.01 or an elite tight end in the 2nd/3rd round turn. Maybe J.K. Dobbins, Breece Hall, or Travis Etienne seemed too enticing in the 5th.  By Round 7, there’s a big hole in your roster – who is going to fill your WR3 or FLEX position?

Naturally, there are precious few obvious candidates to be a reliable wide receiver asset after Round 6 this year (unless someone falls). There are some interesting boom-or-bust picks and a few medium floor/low ceiling guys, but ideally, we want players who can provide a decent floor with palpable upside built into their range of outcomes.

These may not be the sexy young breakout candidates you desired, but by this point in the draft, all the shiny new toys are gone. We need to look for guys who have a penchant for attracting targets in bunches. Here are three candidates who have decent floors and are potentially cheap target magnets if things break the right way.

I wrote about Gage earlier this season when he signed with the Buccaneers. While we recognized how well he’s performed whenever called upon, we stopped short of giving him a ringing endorsement as a pick at ADP. While he still isn’t an exciting selection, his 2022 prospects have recently improved in a significant way.

Since March, two variables have shifted: Rob Gronkowski retired, and Chris Godwin appears a lock to miss multiple games early in the season. While Gronkowski could still return, we can no longer count on it from a target projection standpoint. As far as Godwin goes, he is “not where he needs to be” and without a timetable to return.

We also are obliged to mention that Gage was 24th out of 145 qualifiers in targets per route run and that at age 26 he is in range to have a peak season.

While Mike Evans is likely to draw the deep targets and double teams, Gage’s 2021 aDOT (average depth of target) of 9.3 demonstrates how he is going to be used: as a short-yardage possession receiver and chain-mover. How good exactly is Tom Brady within 0-10 yards of the line of scrimmage?

As we can see, Gage’s strengths fit right in with Brady’s. Brady recently said he “has to have a big year” for Tampa Bay. Mike Evans and his hamstrings will be 29 when the season begins, and we have zero guarantees about Gronkowski and Godwin. Gage is a decent pick with target upside at his current ADP.

Renfrow was fantastic in 2021 – he put up a 103/1,038/9 line and was rewarded with a two-year contract extension. While the borderline WR1 Hunter Renfrow was never going to last, the Davante Adams signing took all the shine off of his WR2 floor. 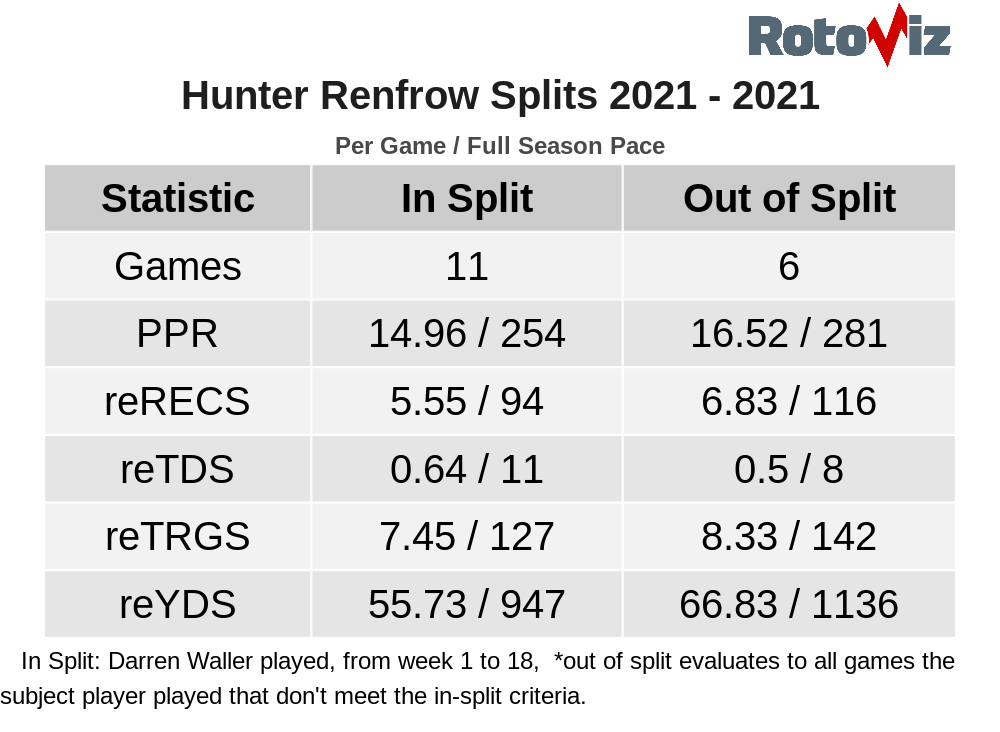 It’s not like there is a ton of depth behind Adams, Waller, and Renfrow either. Zay Jones and Bryan Edwards are gone, and Demarcus Robinson and Keelan Cole aren’t going to make a dent in anyone’s target share.

Hunter Renfrow was 33rd in targets per route run out of 125 qualifiers, and we know the Raiders will have to score in a division with Patrick Mahomes, Justin Herbert, and Russell Wilson. Renfrow should still have an 80+ catch floor (health allowing), and he has shown excellent touchdown-scoring ability as well. If anything should happen to Adams or Waller – two players always seemingly nicked up – Renfrow will again be an unsexy yet valuable asset on your roster.

Seemingly an afterthought at his current ADP, Landry (30 in November) is no one’s idea of an explosive player. But the amount of small positive details add up to a great pick at his current price.

Despite missing some time with injuries, Landry commanded the 2nd most targets per route run amongst 145 qualifiers in 2021. After signing with the Saints, the drafting of Chris Olave and the apparent return of Michael Thomas took a lot of shine off of his 2022 prospects.

However, Olave was never a voluminous receiver at Ohio State and is unlikely to turn into one as an NFL rookie. The big story, however, is Michael Thomas’ outlook:

#Saints WR Michael Thomas still looking bothered by his left ankle on these routes. That's the main reason our team of Pro Football Docs have a low SIC score for him heading into the season

Even to the untrained eye, Thomas – somehow only three months younger than Landry –  looks nowhere close to game-ready – as you can see above, professionals are very wary of his 2022 health after putting off ankle surgery last year. Teams typically wear rose-colored glasses when discussing their injured players, but the Saints organization has been shockingly quiet about Thomas – especially after their disagreement on how to handle his 2021 injury.

Throw in the fact that Alvin Kamara is expected to be suspended at least six games, and there is a potential huge target vacuum in New Orleans. How does Landry fit in with starter Jameis Winston?

As we can see courtesy of NFL Next Gen Stats, Jameis Winston (until his injury) was at his best throwing short towards the right side:

Now let’s look at where Landry has excelled the past three seasons, per RotoViz’s AYA app:

While this isn’t a super surprising statistic (quarterbacks are usually at their best throwing to their strong side), we know Landry is more than capable of fulfilling the role with volume – unlike any receiver that was healthy for the Saints last year. Sharp Football Statistics also supports Jameis’ excellence when throwing short and to the right, ranking 1st among all quarterbacks in the NFL last year.

Landry is not going to be a league-winning player, but he is a darkhorse to catch 90+ passes and has a floor far higher than anyone else available at his price. Especially if the Michael Thomas injury lingers, Landry could be a boring source of 12+ fantasy points for your team week in and week out. He is an excellent candidate to be a cheap potential target magnet.