Even the most talented players in the NFL are not immune to variance and regression. Despite their obvious stardom, they suffer nagging injuries, quarterback inconsistency (or downright incompetence), faulty offensive lines, and coaching to just name a few roadblocks. However, this provides a fantastic discount on incredible fantasy assets for those bold and shrewd enough to draft them the following season – here are three post-hype stars coming off of a down 2021 to draft at ADP.

After a sensational, fantasy league-winning 2018 rookie season, those who drafted Saquon Barkley the past two years have been met with very little besides failed expectations and nagging injuries. Many fantasy owners have a tendency to completely write off players that disappointed them in the past, but that is not a sound strategy – especially for supremely talented players like Barkley.

Arguably the most elite running back prospect since Adrian Peterson, it isn’t theoretical that Barkley can put fantasy teams on his back: he caught 91 passes and finished 2nd in the league in rushing yards and finished as the overall RB1… as a rookie. Here are the biggest reasons why Barkley is one of the best post-hype stars to draft at ADP:

Saquon Barkley is going to love running behind Evan Neal this year. pic.twitter.com/pTfUjzV3wq

The improvement that Brian Daboll should bring to this offense cannot be overstated. His offense will be leaps and bounds more creative than anything Barkley has experienced in his career, and his return to elite PPR status – a must when drafting a running back in the first few rounds – looks imminent:

The #Giants are going to be able to do some really nice things when Saquon Barkley is out wide.

Just lined him up in a 3-WR stack, motioned him into the backfield, and Jones hit him for a 10-yard touchdown on a wheel-route. #Giants @HeavyOnSports

His ADP is likely going to rise to the edge of the first round as the season nears and he provides as much running back upside as any running back after Jonathan Taylor and Christian McCaffrey (and possibly even including them). Pairing pairing him with Ja’Marr Chase, Stefon Diggs, or Davante Adams in the late first round gets your draft off to a blistering start.

Barkley looks like the next version of another recent post-hype sleeper two years removed from an ACL tear:

A perennial man-crush of ours, we’re once again betting on talent, positive health, and touchdown regression for one of the most physically gifted receivers in the league. Brown was feast or famine last year, sprinkling in four games of 91 yards or more receiving yards (three of those games with at least 133 yards) but with nine games with 68 yards or less.

After missing arguably the most imperative stretch in fantasy leagues (Weeks 11-15) with a chest injury, many owners are down on Brown after spending a second-round selection on him in 2021. But there are several reasons Brown is a fantastic post-hype star worth drafting at ADP:

All Jalen Hurts does is throw the football to A.J. Brown. #Eagles

Let’s also not forget that A.J. Brown is headed into his age-25 season, historically the start of a wide receiver’s prime. The training camp reports about Brown’s performance to go along with his opportunity have been universally positive:

Catch an all new "Ferrall Coast to Coast" at 3ET/12PT on @SportsGrid, @SportsGridRadio & @SIRIUSXM Ch. 159!! pic.twitter.com/V1A4UyhNhy

Aiyuk had an awesome 2020 rookie season, creating explosive plays as the only viable playmaker at times when Deebo Samuel, Raheem Mostert, and George Kittle all went down with various injuries. His 2021 was expected to be yet another example of an awesome sophomore leap, but the season couldn’t have started worse for Aiyuk.

After many fantasy owners used a fifth-round pick on him last year, Aiyuk started in Kyle Shanahan’s doghouse and was losing snaps to “Trent Sherfield” as Deebo Samuel lit the world on fire. But many conveniently forget what happened once he started seeing a 90% snap rate in the second half of the season (using Rotoviz’s Game Splits app): 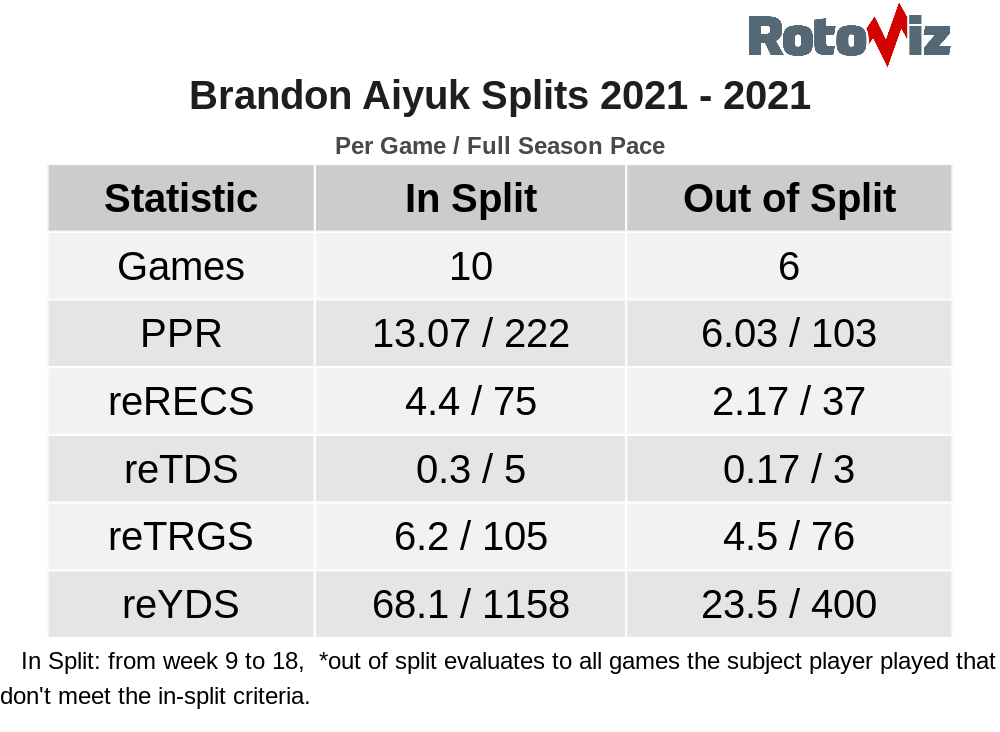 Aiyuk was very, very good in the second half of last season, despite having to share targets with Deebo Samuel and George Kittle. His second-half pace of 222 PPR fantasy points would have made him the WR22 right behind Brandin Cooks, Marquise Brown, Amon-Ra St. Brown, and ahead of Darnell Mooney and Tee Higgins – all players who are going at least 2-3 rounds before Aiyuk in 2022 drafts. Aiyuk’s 2022 training camp also appears to be a complete turnaround from last year:

Brandon Aiyuk has been the star of #49ers training camp

We are also ignoring a very important element for Aiyuk: the hidden upside in his range of outcomes. He played nearly the entire 2021 season competing with both George Kittle and Deebo Samuel for targets. These are two players who are no strangers to the trainer’s table, and both missed at least half the season in 2020 with injuries. We know Aiyuk can perform at a WR2 level even with them in the lineup, but look at his career splits without Samuel: 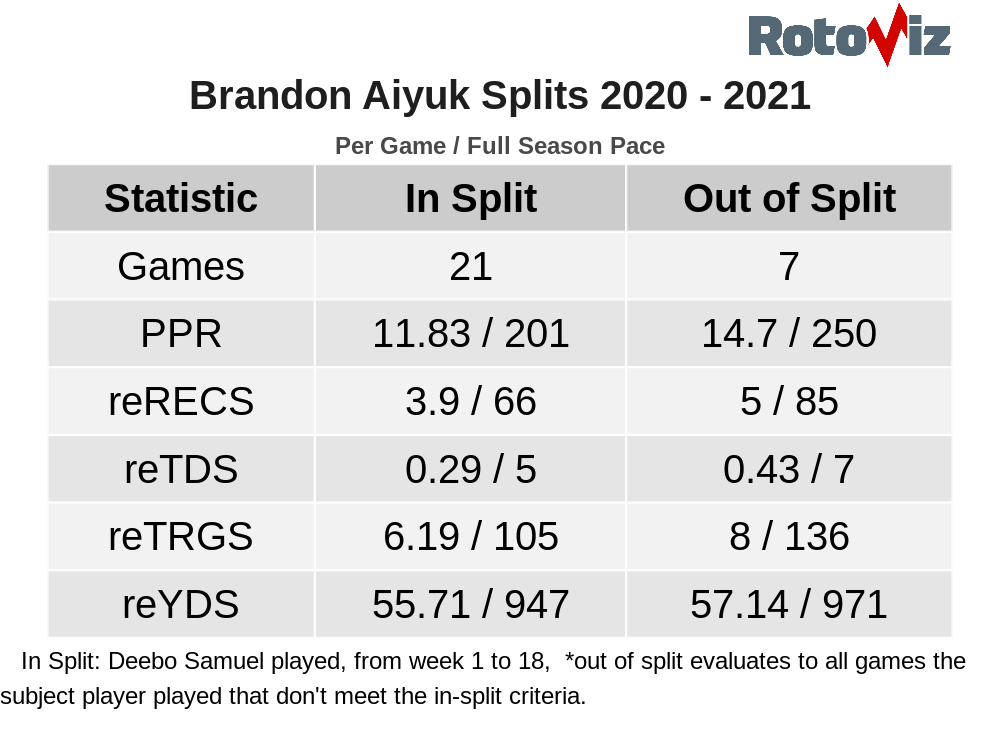 His PPR point-pace is even higher without both Deebo and Kittle (286) and although they may pass less with Trey Lance at the helm, this is already built into his late-8th round price. Aiyuk is one of the best post-hype stars considering his cost and has the floor and ceiling to easily surpass his ADP.