Drafting in the late rounds is difficult, as players are always unlikely to hit when they’re being drafted outside the top 120 picks. However, there are notable exceptions, and here are some cheap wide receivers that could be extremely valuable if things break right in 2021. I’ve listed their current Apex average draft position (ADP).

A second-round pick by the Panthers, we were enamored with Terrace Marshall in our draft guide. His draft capital and production, combined with elite athletic traits, make him a very impressive prospect. His production even before the departures of Justin Jefferson and Ja’Marr Chase was impressive.

Terrace Marshall fractured his foot in week 4 of 2019.

Stats are nice. Context is key.

Marshall joins a Panthers team that previously ran their offense through three wide receivers. DJ Moore and Robby Anderson remain but Curtis Samuel and his 97 targets have departed. Even before their first preseason game, Marshall was making noise in camp.

Then he looked impressive against the Colts.

Terrace Marshall with the 59-yard catch and run 👀
pic.twitter.com/cYdVVlgnai

Not the best athlete, Jakobi Meyers went undrafted entering the NFL. After converting from quarterback, he had to work to become an NFL wide receiver. Sound like any other Patriots receiver you know?

Over the second half of last season, he began to heat up – averaging 5.3 receptions for 67.1 yards over his final nine games. He didn’t generate the warranted buzz because he didn’t catch any touchdowns. Cam Newton was at his best when targeting Meyers. 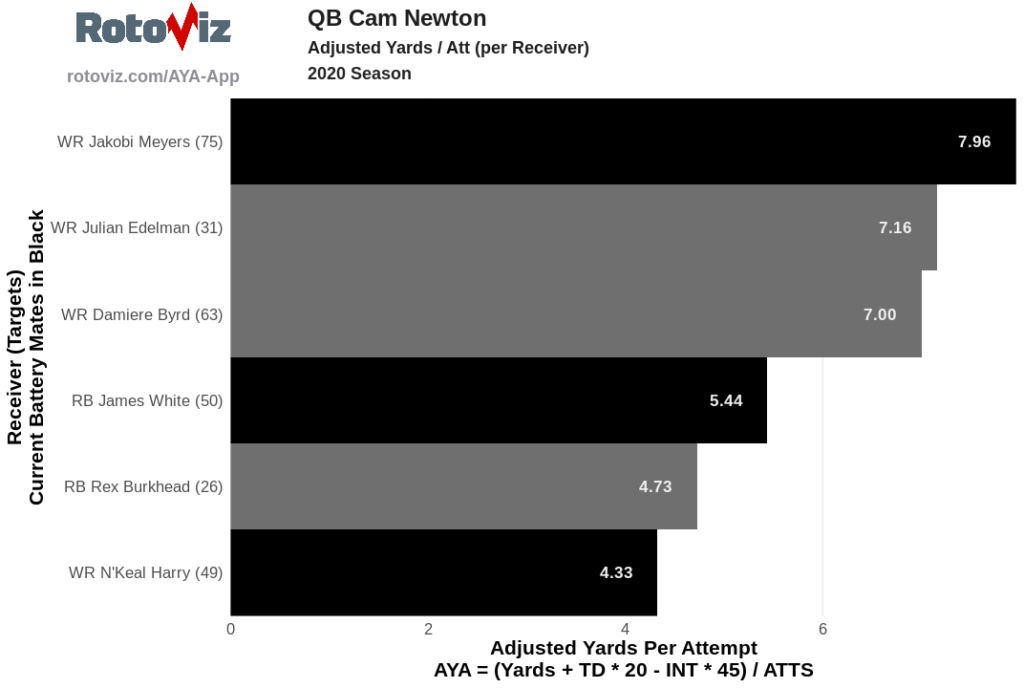 Meyers looks poised to take over the productive “Julian Edelman” role. If you don’t want to listen to me or the beat writers, listen to Ben Gretch.

Oh, and he scored a touchdown last night.

Last offseason our own Dalton Kates wrote about why dynasty players shouldn’t be leaving their drafts without Bryan Edwards. His age-adjusted college production and size are characteristics that are worth chasing.

Edwards started last season, but an ankle injury sidelined him early on. Once he was finally healthy, Nelson Agholor had stolen his job. Albeit a small sample size, Edwards looked like a quality receiver when targeted. 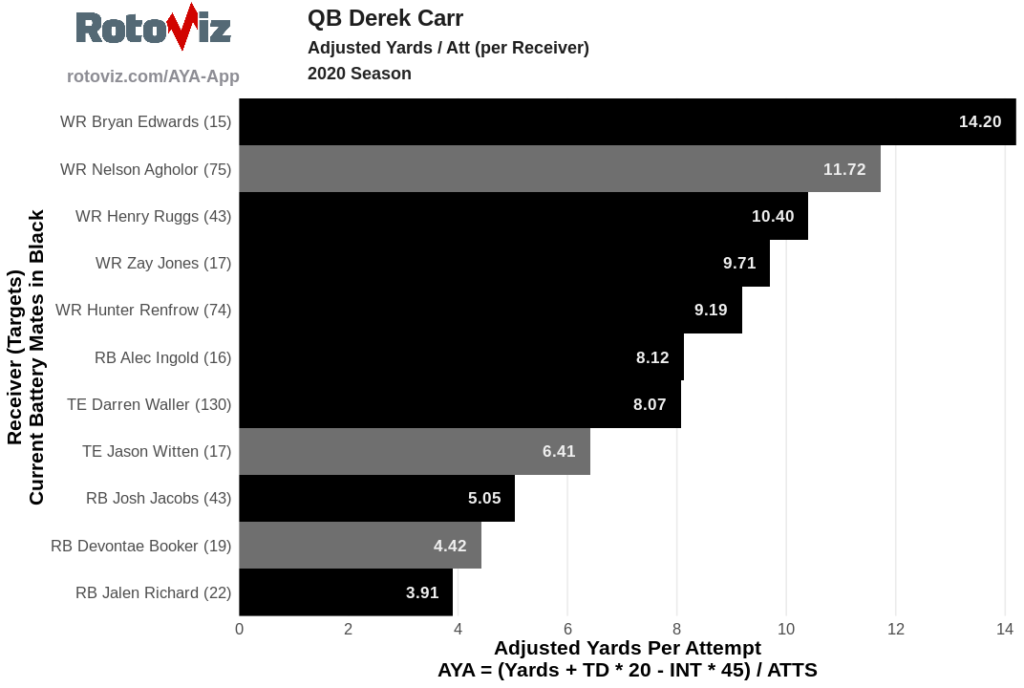 In camp, he’s generating plenty of buzz. The Athletic’s Vic Tafur reported Edwards has “consistently” run with the first-team offense ahead of John Brown at Raiders camp. Although certainly premature, Jon Gruden said Edwards reminded him of Hall of Famer Terrell Owens and Carr said he reminded him of superstar receiver Davante Adams.

These are the type of plays that Edwards will need to make consistently.

It’s favorable that Derek Carr believes in him.

A speed demon with high draft capital, KJ Hamler has multiple compelling elements to his profile. I wrote about why he was an excellent second-round rookie pick last offseason.

This table illustrates how similar he is to DeSean Jackson and Marquise Brown.

Hamler struggled with injuries as a rookie but showed his upside in Week 14 with an 86-yard two-touchdown performance. He again showed he was the fastest player on the field on Saturday.

There should be a lot of competition for targets in Denver. But if Hamler gets a significant opportunity, he could emerge in a big way a la young Desean Jackson.

Parris Campbell is a player that I really believed was going to break out with Philip Rivers last season. After six catches for 71 yards in the opener, things were looking excellent. Then, Campbell hurt his knee in Week 2 and was out for the season.

Like many of the other players on this list, Campbell combines multiple elite traits. He has 100th percentile speed, 97th percentile leaping ability, and was a second-round pick.

He caught 55 more passes than Terry McLaurin in their final season together.

He’s still backed by the coaching staff and GM.

Ballard calls Parris Campbell's injuries "bad luck." Notes he's still young and has the faith of coaches and teammates. "We think he's going to be a valuable member of this team moving forward." #Colts

And he looked ready to ball on Sunday.

As a prospect, I like him more than Michael Pittman. Throw in cost, and Campbell is a slam dunk selection in the last round of your draft.