A Great Late Round Quarterback Target

Late round quarterback is a concept that began based on scarcity. When a few quarterbacks were scoring far more than the other QBs, there was some value in drafting a quarterback early. In today’s game, with many teams passing more frequently compared to decades past, the quarterback position is heavily devalued in one-quarterback fantasy football leagues.

The reason the position is devalued is the plethora of options at quarterback. Even if you wait until after the first 10-15 QBs are selected, there are still quality starting quarterbacks available. One of my favorite quarterback values, Jameis Winston, is currently being drafted as the 20th QB off the board. Let’s delve into why he could far exceed this ADP.

As a rookie in 2015, Winston played all 16 games and finished 13th out of QBs in scoring. In his second season, he finished as QB12 – both very promising signs for a young quarterback.

Last season, however, had its complications. Over the course of 2017, Winston missed three entire games and left early with injuries in two more. Despite this, he still finished 15th out of quarterbacks in scoring per game and as QB20 for the entire season. But if we remove his two partial games with 13 or fewer pass attempts, his statistics look much improved. 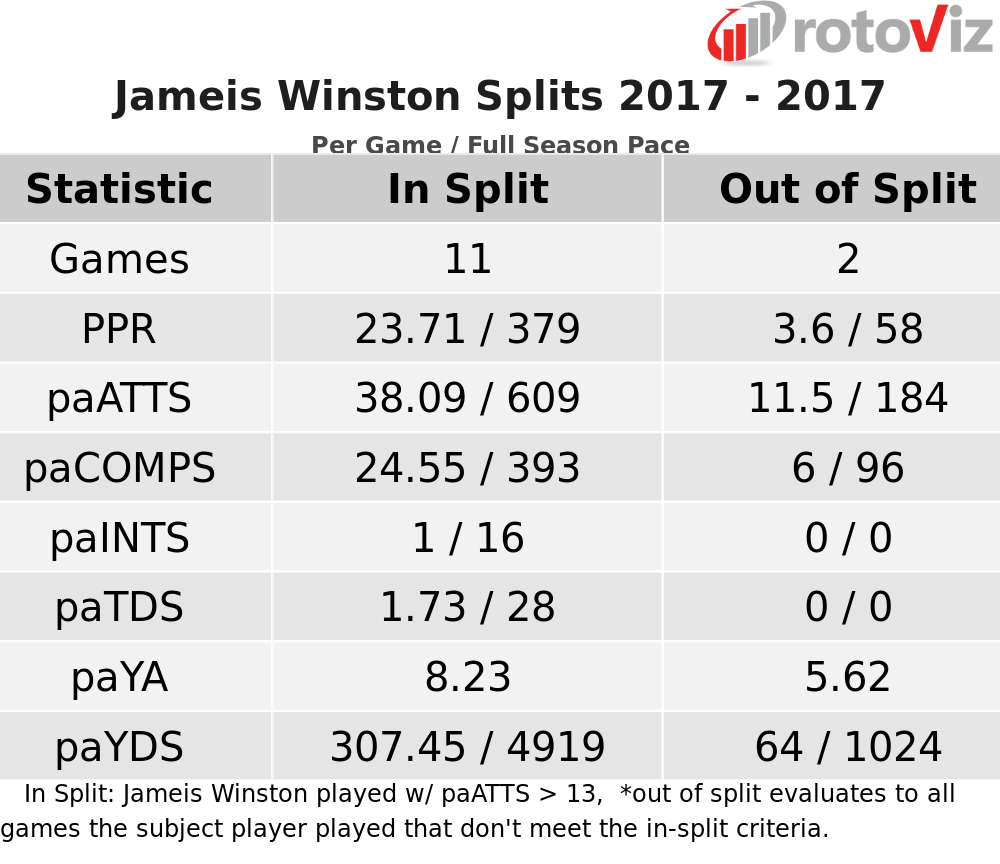 If we only include Winston’s full games in 2017, he finishes 7th in QB points per game. In addition, he was on pace for 609 passing attempts – which would have led the NFL in 2017. Not only has Winston been productive as a young player but the volume is there for a big breakout.

Part of what makes a quarterback’s output is the inputs. Good pass-catchers can make quarterbacks. For the first time, the Buccaneers have surrounded Winston with one of the league’s best supporting casts.

I don’t need to tell you how good Mike Evans is, but I will anyway. In 2016, a 23-year-old Evans finished behind just TY Hilton, Julio Jones, and Odell Beckham Jr. in receiving yards. Evans led all four players with 12 receiving touchdowns.

The Bucs signed DeSean Jackson last offseason and while he didn’t make a huge splash in his first season with the team, it’s hard to argue that he’s not a solid field-stretching WR2.

The player that I’m most excited about in this offense is Chris Godwin. Godwin was Winston’s most effective target last season, averaging 10.36 adjusted yards per attempt on 39 targets. Godwin will be just 22 years old this season and is coming off a season that he totaled 525 yards on just 55 targets. He stacks up well with a couple other 21-year-old rookie wide receivers who have had success in the NFL.

I wrote more about why I expect Godwin to breakout here. Opportunity may be hard to come by, but the Bucs should be making an effort to get him the ball.

In addition to the three wide receivers, the Bucs have two impressive tight ends. Cameron Brate and O.J. Howard combined for 12 touchdowns on just 116 targets.

The Bucs have finally moved on from Doug Martin, one of the league’s least efficient running backs over the past two seasons. Martin averaged an unthinkable 2.9 yards per carry on his last 282 rushes. Don’t expect Martin to suddenly turn it around on the Raiders.

Rookie running back Ronald Jones, out of USC, was drafted to replace Martin. Jones is a bit of a mysterious prospect, but he was a workhorse in college and the Bucs invested the 38th overall pick to select him. He won’t need to be great in order to be an improvement over Martin.

With a plethora of good pass-catchers, the Bucs should be more effective on offense this season. Winston clearly has the volume and weapons necessary for a QB1 season. The crazy part is even if Winston performs as he has in previous seasons, he’s still a value pick where he’s currently being selected. Don’t miss out on the bargain.