Alshon Jeffrey’s promising career was at a crossroads in 2017. After breaking out with a WR8 finish in 2013, he continued his excellence in 2014 with a WR10 finish. But the next two years, Jeffrey battled poor quarterback play and injuries, limping to finishes of WR42 and WR55 in 2015 and 2016 respectively. A change of scenery revitalized him in 2017- the high-flying Eagles offense helped him produce a WR23 finish. However, I’m here to tell you he is not worth his opportunity cost and his prognosis is wrought with red flags.

Value At His ADP? Not So Much

My esteemed colleague Mike Braude gave me the idea for this analysis with a tweet of his in which he used the RotoViz Screener to uncover the mask behind Jeffery’s ADP.

All of these wide receivers are being drafted at the end of the 4th round, but the numbers above show that Jeffery sticks out like a sore thumb. He scored a full 2.1 PPR points per game less than his ADP-mates which raises questions about both his floor and his ceiling.

Just as feared, Jeffery shows an alarming lack of floor and ceiling compared to the others. Among the players above Jeffery finished last in 5+ catch games and 75+ yard games, really hurting his floor. But at least he’ll win you weeks when he explodes, right? Wrong. He also finishes dead last in 18+ PPR performances with a mere two. Every other player has shown not only a better floor but a better ceiling than Jeffery – a very alarming notion.

Will The Targets Or Efficiency Be There?

The main draw of Alshon Jeffery is being the number one wideout on one of the best offenses in football. But that doesn’t necessarily hold up to closer inspection: 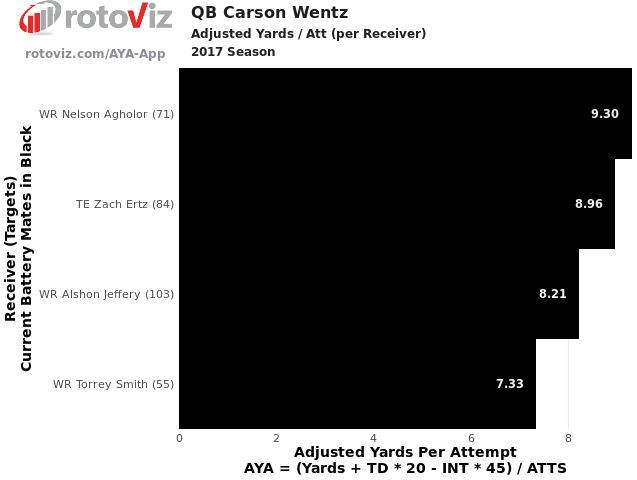 You see, Jeffery was actually only the third most efficient passing game option on the Eagles. Nelson Agholor had 25 fewer targets than Jeffery but was only outscored by 2.4 fantasy points over the entire season. Agholor’s ADP? End of the 8th round.

Let’s also not forget the following: Darren Sproles will be back to siphon off targets (not to mention Jay Ajayi’s and Corey Clement’s target shares), Zach Ertz’s emergence as a touchdown scorer (Jeffery’s calling card that he no longer monopolizes) and the addition of Mike Wallace (a rich man’s Torrey Smith). You could argue that 2017 might prove to be Jeffery’s ceiling on this offense.

Jeffery may have finished as WR23 last year, but as mentioned above his floor is dangerously low (9 games with under 12 PPR fantasy points). This is because he is the WR version of LeGarrette Blount: if he doesn’t score a touchdown, he is at best going to give you a mediocre performance. With Ertz, Agholor, Wallace and multiple goal-line backs as proven touchdown scorers, there’s no way this brilliant and innovative coaching staff is going to force-feed the ball to Jeffery.

Sure, he scored nine touchdowns last year – but those can be volatile (just ask Julio Jones).  Jeffery himself had 6 touchdowns in the previous two seasons COMBINED, showing he isn’t immune to negative regression. Not exactly ideal for a 4th round investment who ranked 35th among WRs in catches and 29th in yards in 2017.

Jeffery is also still recovering from rotator cuff surgery – something that is a sobering reminder of Jeffery’s injury-shortened 2015 and 2016 (while seemingly always playing through some nagging soft-tissue ailment at far less than 100%). You’re much better off taking another WR at his WR22 ADP. If you want in on this awesome Eagles offense, I’d suggest taking the younger and more efficient Nelson Agholor five rounds later.