For owners who draft Zero RB teams, it’s important to secure value at the running back position. There are three starting running backs who are drafted after pick 85, each could return value this season.

Each of these running backs have limited involvement in the pass game, but should lead their teams in carries. Let’s take a look at each player’s situation.

After finishing as RB3 as a rookie in 2012, Martin has taken several big steps back. Unable to top 500 rushing yards in 2013 or 2014, owners are questioning whether he can bounce back. Shawn Siegele makes a good argument as to why Martin can be a value pick.

There should be concern about Martin’s involvement in the pass game. Sims averaged more yards per target last season than Martin has in any of his three seasons. 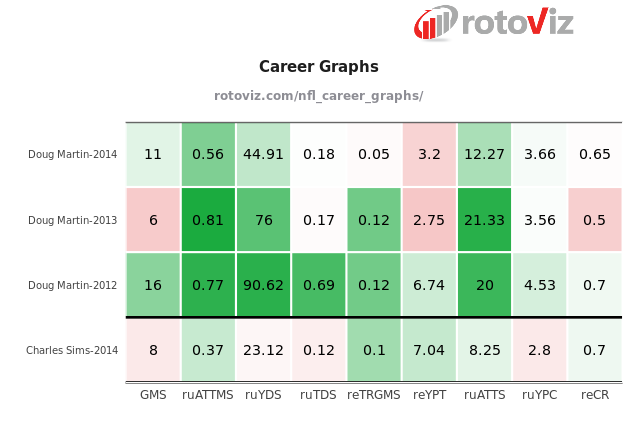 In fact, Sims averaged more yards per target last season than Martin has in his last two years put together. While Sims proved more efficient in the pass game, his 2.8 yards per carry is terrible in the run game.

I expect Martin to see the early down work with Sims coming in on passing downs. Was Martin effective with his carries last season? Let’s check the advanced metrics.

Out of 57 running backs that played at least 25 percent of their team’s snaps, Martin finished 39th in yards after contact per attempt. He finished 56th out of 57 in the rate at which he forced tackles. Those numbers are far from ideal.

If you can acquire Martin at a cheap price, you’ll be obtaining rushing volume. The Bucs have added Jameis Winston and could see the redzone more frequently this season.

A dynamic talent as a rookie, reports have been extremely positive for Martin. He slimmed down to 210 pounds. Beat writer Roy Cummings believes he’s had his best offseason in three years. 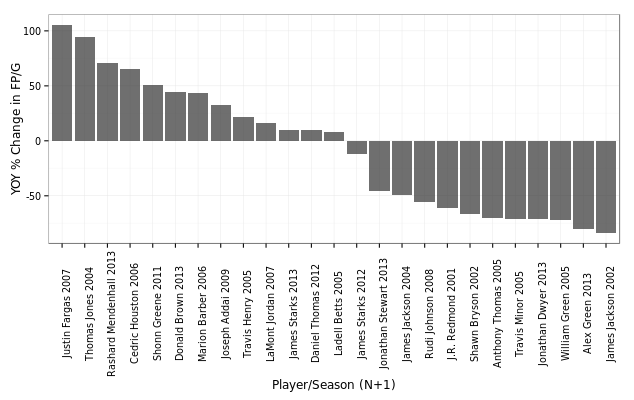 At his current price Martin seems fairly valued as a post-hype player who could bounce back.

Coming off a disappointing rookie season that led many in the industry to question Sankey, his price tag is extremely cheap. Sankey didn’t perform at a high level but was also held back by coach Ken Whisenhunt, who badly wanted to keep Shonn Greene on the field.

The narrative has shifted this season as Sankey is in line for lead back duties but the Titans drafted David Cobb in the 5th round to compete with him. While the two compete for early down work, Dexter McCluster will presumably continue to receive third down work.

Out of the 57 running backs that played at least 25 percent of their team’s snaps, Sankey finished 19th in yards after contact per attempt. He finished 16th out of 57 in the rate at which he forced missed tackles. According to those metrics, Sankey was an above average rusher last season.

Another positive for Sankey is the addition of Marcus Mariota. Not only do we expect the Titans offense to improve, but also the positive impact of a rushing quarterback on his running back is well documented. For this reason Sankey is likely to see an increase in yards per carry.

The RotoViz Comparable Density Plot agrees that Sankey could have an emergence this season:

While all of these backs have questions about usage, Chris Ivory’s job is likely the most secure. Like the others on this list, he’s unlikely to receive pass down work but has a stranglehold on the early down carries.

With Chris Johnson gone, the Jets added Stevan Ridley and Zac Stacy. The former Jets coaching staff admitted they limited Ivory’s carries last season because they were worried about his durability. After playing 31 of 32 games over the last two seasons, it’s possible the new coaching staff rides him a little harder.

In terms of advanced metrics, Chris Ivory’s missed tackle rate finished 4th in the league out of the 57 who qualified. He finished 21st in yards after contact per attempt. Both of those are above average.

The reasons for optimism coming into this season arise from new offensive coordinator Chan Gailey. Gailey helped C.J. Spiller rush for an insane 6 yards per carry on 207 rushing attempts in 2012. He could work wonders for Ivory.

While Ivory’s comparable seasons aren’t as favorable, it’s because he was productive last year (unlike Martin and Sankey). While he’s being selected as RB39, Ivory finished as RB24 last season. He’s shaping up as a value pick.