As fantasy football fanatics, our community always roots for the most exciting rookies to be drafted by teams where they will have as much opportunity as possible to show off their ability. Which teams could use the stud wide receivers that the 2020 draft class has to offer?

Where Could Rookie Wide Receivers Make An Immediate Difference?

Besides obvious stud Courtland Sutton, the Broncos have precious little at the wide receiver position. Here are the current candidates to start opposite Sutton in 2020 (with their 2019 stats):

Even if you combined their 2019 production, the next four wide receivers on the Broncos would have finished as the WR55 on the season. Denver has an exciting young offense featuring a three-headed monster at RB, rocket-armed Drew Lock as the QB, an elite TE prospect in Noah Fant, and aforementioned stud in Sutton.

There are plenty of targets to go around on the Broncos and another good receiver would improve the quality of targets that Sutton receives. The Broncos are a near lock to take a wideout in the first three rounds of the draft.

After the (at best) questionable trade that sent DeAndre Hopkins to Arizona, the Texans have a Grand Canyon-sized hole to fill at wide receiver. Despite the begging and pleading of the fantasy community to the football gods, Will Fuller has yet to play a full season in the NFL and has missed over a third of the 64 career games he has been eligible for due to injury.

Counting on Fuller to carry an entire passing offense would be an unimaginable gamble even for someone as reckless as Bill O’Brien. Kenny Stills has had an efficient career but has topped 100 targets once in his seven-year career. Factor in proven stud Deshaun Watson and a lack of volume receiving tight ends and you have a recipe for rookie success at the wide receiver position in Houston.

After signing Breshad Perriman and losing Robby Anderson, the Jets broke even (if you’re being optimistic) on their wide receiver quality heading into 2020. The last five games of 2019 where Jameis Winston peppered Perriman with relentless targets was fun for all of us, but let’s remember who he was his entire career before that: 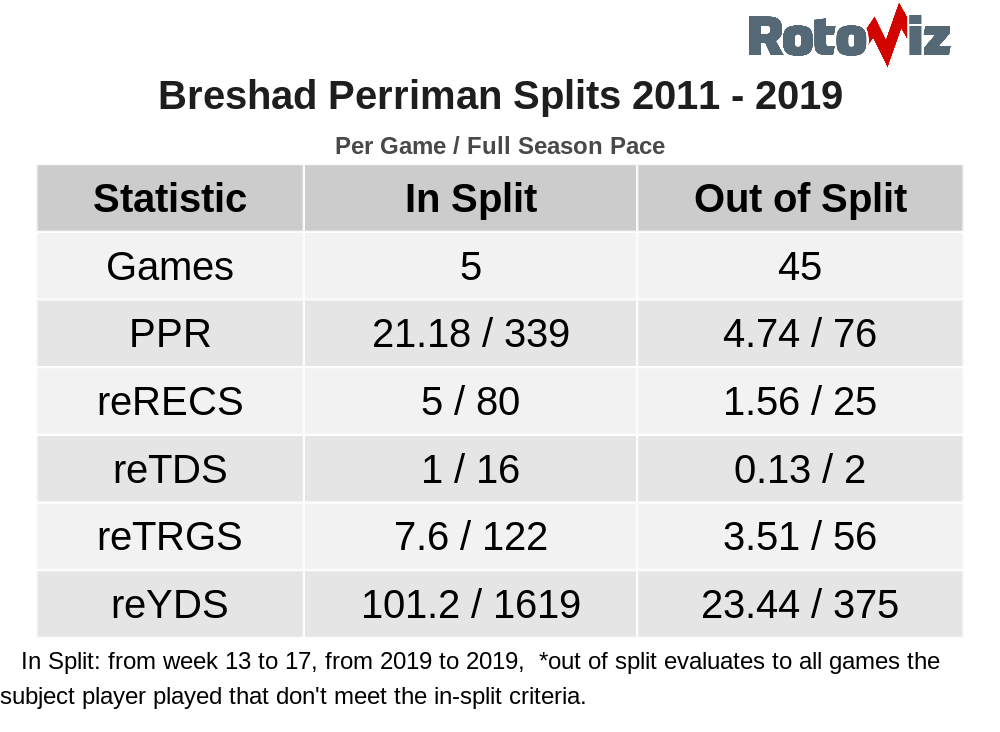 Jamison Crowder is a serviceable slot presence, but the Jets will not be trotting out Vyncint Smith opposite Perriman Week 1. It’s about time Sam Darnold – a young QB at a critical crossroads in danger of being yet another Adam Gase victim – gets a real number one weapon, and we know a gunslinger like Darnold will not be afraid to put his shiny new toy to use.

Deebo Samuel and George Kittle are absolute studs, but the 49ers are going to ensure Kendrick Bourne and Marquise Goodwin remain role players come Week 1. Emmanuel Sanders was second on the team in wide receiver targets despite only playing in 10 games for the 49ers, and the 49ers have two first-round picks thanks to the DeForest Buckner trade.

The 49ers are committed to Jimmy Garappolo and will likely get him more help in the coming NFL draft. They could use a consistent downfield threat as Kittle and Samuel make noise with the ball in their hands close to the line of scrimmage.

With Alshon Jeffery and DeSean Jackson, the Eagles have aging receivers who have struggled with injuries. Over the past five years, Jeffery has played 60 of 80 regular-season games and will be 30 years old this season. The same is true for DeSean who has played 54 of 80 regular-season games over the past five years. An injury-plagued receiver who will 34 years old this season, D-Jax is even more concerning from an age standpoint.

JJ Arcega-Whiteside is an interesting young player but isn’t reliable after an iffy rookie campaign. Zach Ertz will still be the focal point of the passing offense in 2020, but Carson Wentz could really benefit from a consistent chain-mover on the outside.

Have the Packers learned their lesson about trying hit on late-round wide receivers? Here is every receiver they have drafted since taking Davante Adams in the 2nd round of the 2014 draft:

The only “wide receiver” who has come close to panning out on that list accumulated almost all of his statistics as a running back. Other than that, their wide receiver drafting has been an abject failure as Aaron Rodgers yearns for the days of having a duo like Jordy Nelson and Randall Cobb.

The Packers are built to win now, and Aaron Rodgers’s career clock is ticking. It’s time Brian Gutekunst and company finally give the Packers a number two threat on the outside, and we know it is vital to spend a high pick on a wide receiver if you want them to be a stud.

Terry McLaurin (58/919/7 on 93 targets) was one of the few bright spots during a miserable 2019 for the Redskins. A contribution here and there from role players Steven Sims and Kelvin Harmon bookended McLaurin while Trey Quinn manned the slot. It’s not an ideal situation for even a good NFL quarterback, let alone the unproven Dwayne Haskins.

Unbelievably, the Redskins were the only team in the NFL who did not have multiple players with over 400 receiving yards in 2019. On a team that figures to be struggling again in 2020, there will be plenty of targets available while frequently playing from behind.