Calvin Ridley has shown fantasy owners that he’s an excellent player. Still, his average draft position of WR18 hasn’t caught up with his extraordinary upside. Let’s break down Ridley’s profile to explain why he’s undervalued.

If you followed our blog last offseason, you know we were touting Calvin Ridley as a breakout receiver you don’t want to miss. Ridley’s efficiency as a rookie was worth chasing, as efficiency is one of the strongest correlators with future volume.

Heartthrob A.J. Brown joined this exceptional list in 2019. If a player makes this list, it’s likely that he’s in for a great NFL career.

As a second-year wide receiver, Ridley did not disappoint. He increased his yards per target to 9.3 while catching seven touchdowns and topping his rookie year receiving yards in just 13 games.

Here’s a list of wide receivers who had 1,500 receiving yards, 8.2 yards per target, and 15 receiving touchdowns in their first two seasons. 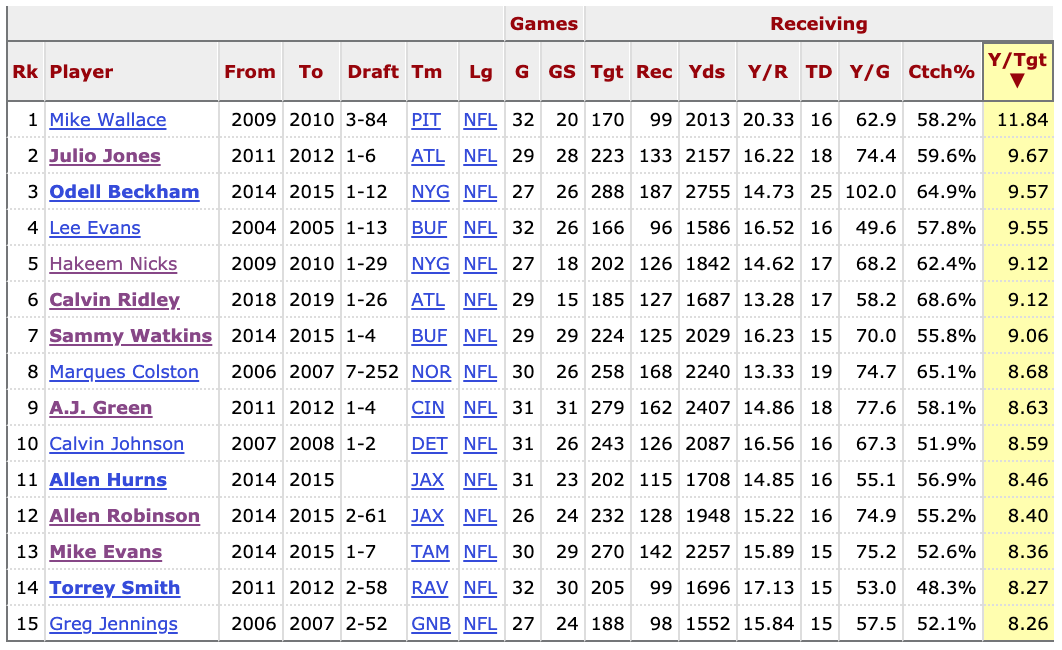 Another year, another exclusive club for Calvin Ridley.

At this point, there shouldn’t be any questions about Ridley’s ability – the only question is volume.

Last season the Falcons led the NFL with 684 pass attempts. Ridley accounted for just 93 of those targets, which is a 13.6 percent market share for the entire season.

Austin Hooper finished second on the Falcons with 97 targets, behind only Julio Jones. Hooper signed with the Cleveland Browns this offseason, while the Falcons signed Hayden Hurst to replace him.

In two seasons with the Ravens, Hurst has been targeted just 63 times. It remains unlikely Hurst comes close to matching Hooper’s targets, receptions (75) or receiving yards (787).

In addition, Mohamed Sanu was traded to the Patriots after the Falcons’ seventh game. After the trade, Ridley’s PPR points per game jumped 4.55 points.

If we use his PPR average after Sanu was traded, Ridley would have slid in as WR7 in per-game scoring.

We can also make a more conservative projection based on the Falcons offense. If we project the Falcons offense to run fewer plays and move closer to the league average, we can reduce their offensive plays to 1,045 (from 1,096 last season). If we expect 64 percent of those plays to be pass plays, we can estimate 622 passes (minus sacks). This would be a decrease of 62 pass attempts from last season.

With 622 pass attempts, if we give Ridley a reasonable 20 percent market share, he would receive 124 targets – which is fewer than the 131 targets he was on pace for following Sanu’s departure.

Ridley’s career catch rate is 68.6 percent. If we apply that, Ridley is projected for 85 catches.

For his career, Ridley has a touchdown rate of 9.2 percent. Obviously, that’s a high rate, so we’ll reduce it to 5.7 percent to be conservative.

Those inputs give us the following projection for Ridley:

With 239.74 fantasy points, Ridley would have finished as the WR12 last season.

Ridley has been an excellent player since being selected in the first round by the Falcons. The only thing that has held Ridley back in fantasy is volume. His first two years of production and comparable players indicate that he has the potential to be one of the league’s best wide receivers.

With the departures of Sanu and Hooper, Ridley is due for a secondary breakout in 2020. Even conservative projections show that Ridley doesn’t need to outperform his career averages in order to finish as a WR1. Buy him now while he remains undervalued.