One coaching hire that I’m really excited about is Norv Turner, who was recently named the Panthers offensive coordinator. We can expect the offense to look a little different with Turner calling the plays. 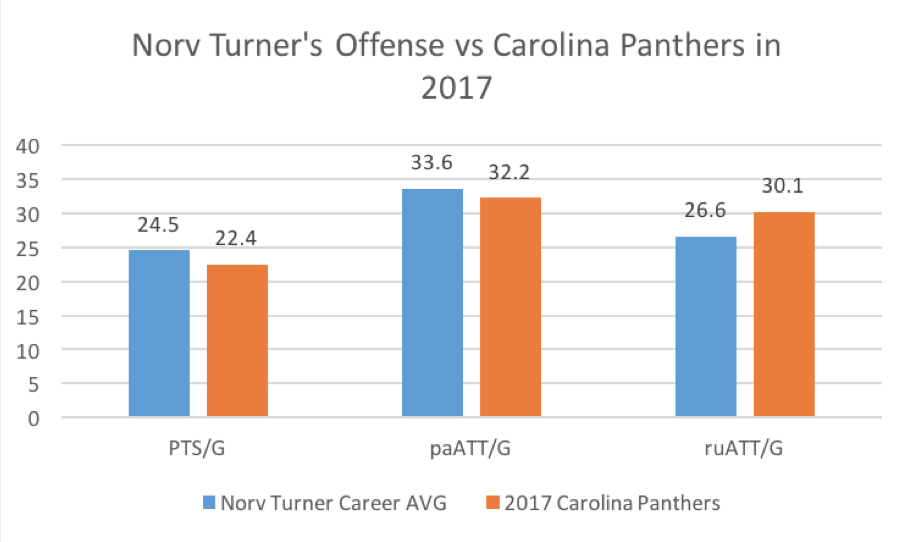 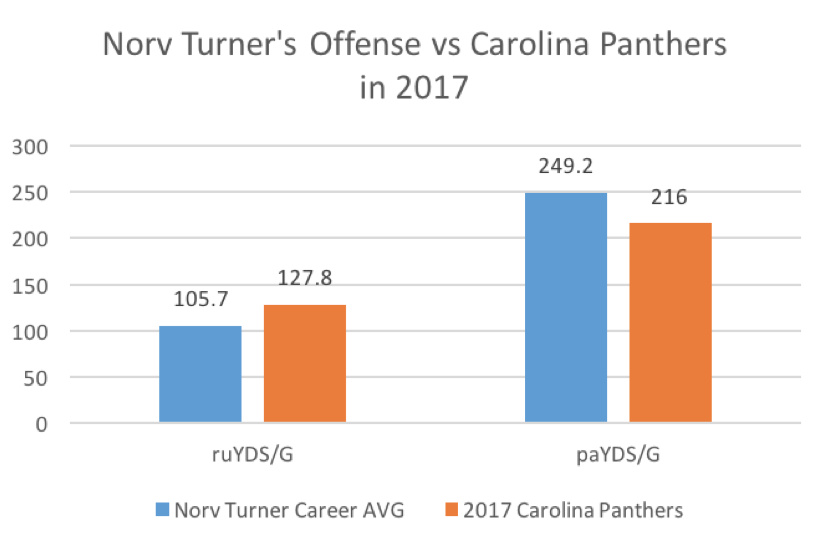 It looks likely that Turner will push the Panthers to pass more frequently. Nevertheless, Panthers QBs coach Scott Turner said the team will continue to use Cam Newton as a rusher. “He’s going to run,” said Turner. “That’s what makes him the dynamic player he is.”

As a passer Cam is a low completion percentage, high yards per attempt kind of quarterback and that fits right into Turner’s wheelhouse. This bodes well for Cam as this system should help elevate his passing game.

To examine Turner’s past pupils, we’ll start with Philip Rivers, who coached the Chargers from 2007-12. As the Chargers head coach, Turner’s offense led the league in yards per attempt.

Rivers numbers remained consistent before and after Norv Turner. It seems as if Turner didn’t have any major effect on the fantasy production of Rivers during his tenure in San Diego. Let’s move on to his next job and consider what he did for the quarterbacks there.

During the 2013 season, Turner was the offensive coordinator of the Cleveland Browns. Since the Browns started three different quarterbacks during that season, it’s hard to draw definite conclusions from – as it was a small sample for each quarterback. Regardless, during the 2013 season, each of Brian Hoyer, Jason Campbell, and Brandon Weeden scored at least two more fantasy points per game than their career averages.

The Browns were not afraid to pass frequently and averaged a ridiculous 42.6 pass attempts per game. This can be attributed to constantly playing from behind with a weak roster that had no running back top 400 rushing yards on the year. It’s difficult to make any definite conclusions based on this one year in which Turner didn’t have any stability at the quarterback position but each quarterback performed better than their career averages.

In Minnesota, Turner coached Teddy Bridgewater for the first two seasons of his career. Since Turner is the only offensive coordinator Bridgewater has played for, we have no standard to compare Turner’s system t0.

In 2016, with Bridgewater hurt, the Vikings traded for Sam Bradford. Bradford performed at an impressively high level, producing career highs in passing yards, completion percentage, yards per attempt, and passer rating. Bradford was also able to avoid turnovers with a 20:5 TD-to-INT ratio.

From studying his prior pupils, we can feel comfortable that at a minimum Cam Newton’s value is unlikely to regress. If anything, Newton’s value should improve based on the efficiency of Turner’s offensive system and an increased number of passing attempts per game.

Throughout Turner’s coaching career, he has made it a priority to get his running backs involved in the passing game. This is a good scenario for McCaffery who is coming off a season in which he led all running backs in targets, and was second in both yards and receptions.

As we can see below, throughout the last ten years Norv Turner’s running backs have actually outpaced what McCaffery did last year. Now keep in mind that is the combined receiving totals from the running backs from each team, but McCaffery should be getting the majority of all receiving work amongst Panther backs next season.

Turner has worked with some gifted receiving backs, including LaDainian Tomlinson, Darren Sproles, Ryan Mathews, and Ronnie Brown in San Diego. During his six years in San Diego, Turner helped his running backs produce impressive numbers in the receiving game.

In Turner’s first season with the Chargers, Tomlinson was targeted 86 times, finishing with 60 receptions for 475 yards. In 2010, Sproles finished second on the team with 75 targets. In 2011, with Sproles departing for the Saints, Turner helped Mike Tolbert catch 54 receptions.

McCaffery could potentially be the most gifted receiving back out of this group which should make fantasy owners giddy at the growth we could see with him in year two with Turner’s help. McCaffery finished as the RB10 in PPR last year while only rushing for 435 yards.

With Jonathan Stewart released, this is the opportunity for McCaffery to be more involved in the Panthers rushing attack. After averaging only 7.3 rushing attempts per game last season, we shouldn’t expect him to suddenly become a workhorse. If it’s an indication, McCaffery saw just six carries in the lone game Stewart missed. This is likely an indication that the Panthers will invest in a power running back via free agency or in the draft to complement McCaffery. Regardless of who they bring in, McCaffery is a good bet to finish yet again as a top 10 RB with his high floor.

I’d also like to note that since 2007, Turner’s offense has finished top ten in rushing yards only twice. With the current composition of the Panthers roster, it’s hard to imagine Turner’s steering away from his pass-heavy tendencies.

Let’s take a look at the top receivers in each of Turner’s past three jobs.

On the other hand, under Turner, Jackson only had two career games in which he had eight or more receptions. Even more alarming, Jackson failed to finish higher than 19th in the league in targets during this span. This shows the volatility that Jackson dealt with on a game-to-game basis, as he was utilized as a big-play target rather than a possession receiver.

Turner helped Josh Gordon attain fantasy immortality in the 2013 season, dominating as the overall WR2 and finishing with 1,646 receiving yards and nine touchdowns despite missing two games. Gordon led all receivers who caught 40 or more balls with 18.9 yards per reception. He benefited from the Browns attempting a league-high 42.6 pass attempts. We see a trend here with Turner’s top receivers being used more as downfield threats than possession receivers.

During Turner’s three seasons with the Vikings, no receiver cracked 1,000 yards and only Stefon Diggs in 2016 had more than 100 targets. Since Diggs is the most accomplished receiver Turner worked on the Vikings, let’s examine his 2016 season. Diggs only played 13 games and was on pace for a high-end WR2 season had he played the whole year.

What we can take away is that Turner worked with different types of receivers and molded his system to fit the receivers that he has on his roster. Another interesting note is Turner has yet to support two fantasy relevant receivers in the same year. Stefon Diggs (WR13 per game) and Adam Thielen (WR37 per game) in 2016 is the best season from a WR2 in Turner’s offense. Let’s note that this could be due to the talented running backs and tight ends that many of his rosters had.

What the Panthers do in free agency and the draft will be key in determining Devin Funchess’s value. If the wide receiver core stays the same, it’s safe to expect middle to low-end WR2 numbers yet again for Funchess. As far as the other receivers currently in the offense, Curtis Samuel isn’t much more than a late-round flier in drafts, while Damiere Byrd and Russell Shepard should be off the re-draft radar.

Let’s look at Turner’s last three coaching gigs to understand how his tight ends have fared in his system.

Turner got his third head coaching job with the Chargers in 2007 and stayed with the team until 2012. Here we saw an already productive Antonio Gates improve his scoring by just over a full point per game over the six seasons. During that tenure, Gates finished as the TE4 or better in four of the six seasons. This seems like the best comparable to Olsen as Gates was already producing at a high level before Turner took over and proceeded to put up similar stat lines.

During the 2013 season, Turner turned Jordan Cameron into a fantasy star. As you can see in the table, Cameron put up career highs across the board en route to a TE4 finish.

On the Vikings, Rudolph saw a bump in usage with Turner’s involvement. Rudolph had a career year in 2016, scoring 209 PPR points and finishing as the TE2.

After examining Turner’s tight ends, the future looks bright for Greg Olsen. He should be able to sustain his top five tight end numbers (excluding his injury-plagued season last year) and could potentially improve. I am buying Olsen this year as he should put up similar stats to the premium tight ends, but at a discounted price.

Rudy, Great stuff as usual. Have you ever considered spending 80% or so of your budget on non injury prone first rounders, maybe 3 hitters and 1 pitcher? Obviously you would have to be all over the waiver wire , but I always am anyway. Last year I won my head to head league prettt much with Stanton my 2nd round pick and my keepers of aranando , turner , Seager and segura. They were pretty much the only staples on my team, and from memory turner and segura spent time on IR. That is what gave me idea. Anyway just curious on your thoughts.