Home / Fantasy Football Studies / Cooper vs. Crabtree: Where Is The Value?

Cooper vs. Crabtree: Where Is The Value?

There’s little doubt that the Oakland Raiders are going to continue their offensive prowess in 2017. With Derek Carr emerging as a true franchise quarterback, a stellar offensive line and two fantastic receivers, there are going to be plenty of fantasy points to be had in the Bay Area. But the past two seasons, hype has not mirrored result when it comes to picking the value at WR on the Raiders. Is this the year Amari Cooper finally takes over, or will Crabtree prove to be the bargain yet again?

Fool Me Once, Shame On You. Fool Me Twice…

Going into 2015, Cooper was hailed (correctly, in my opinion) as one of the best WR prospects in recent memory. Considering his combine, age-adjusted production (more on this later) and dominator rating, it was “can’t miss” territory. Combine that with major target opportunity, and even as a rookie Cooper was highly sought after in drafts.

Crabtree, on the other hand, was a castoff from San Francisco without too many suitors during free agency. Considered an afterthought, his ADP dropped to the double-digit rounds. But here is how the season played out:

According to where they were drafted, Crabtree was a clear value and Cooper slightly underperformed. While both were productive, Crabtree paced the team in targets, receptions, and touchdowns. Granted – Cooper was a rookie and struggling through a painful foot injury. With a promising rookie season at such a young age, Cooper’s ADP in 2016 jumped to the second round. 2016 was the year that Cooper was going to take over the Raiders passing attack, right? Wrong.

Once again, Crabtree proved to be a massive bargain and outperformed his ADP while Cooper struggled through bouts of inconsistency. Cooper had more yards, but Crabtree again led the Raiders in almost every other receiving category while clearly earning the trust of Derek Carr.

While Cooper has slightly disappointed according to his ADP, his career as an NFL wide receiver is incredibly promising especially when adjusted for his age. Not only was Cooper dominating the college football landscape as a 19-20 year old, there have been only 15 seasons since 1970 in which a player younger than 23 years old has posted a 70-1000-5 season in the NFL:

Pretty robust list in my opinion. Most importantly, you will notice that only one player appears on this list twice: Amari Cooper. Keenan Allen and Cooper are the only players to accomplish this feat at 21 years old. We know that age-adjusted production is a fantastic predictor of NFL success, and Amari Cooper has arguably the best age-adjusted production in the NFL. He is going to be a superstar.

Let’s take a look at Amari Cooper’s similarity scores with the help from our friends at RotoViz. 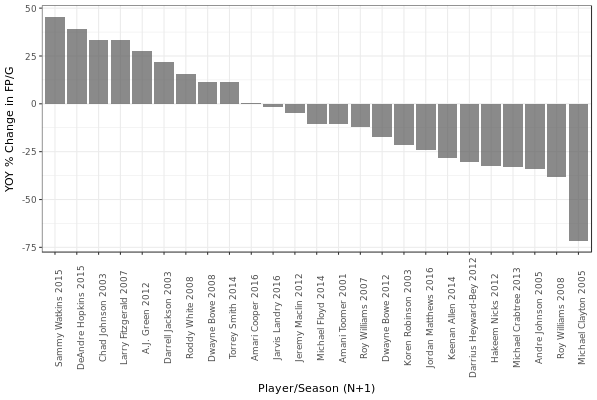 Some pretty incredible names and seasons on that list. Sooner rather than later, Amari Cooper is going to be a top-five WR in this league and you are not going to want to miss out on that party. While he has slightly underperformed on his ADP, he has shown a high floor and the ability to perform through injury. One small concern is his touchdown upside: Crabtree clearly has Derek Carr’s trust inside the 20, out-targeting Crabtree 34-21 the past two seasons combined. But you don’t have to be a prolific touchdown scorer to be a dominant fantasy wide receiver: just ask Andre Johnson or Julio Jones.

But what about the central question: Crabtree vs. Cooper? Let’s see how the MFL10 ADP is stacking up the past couple weeks: 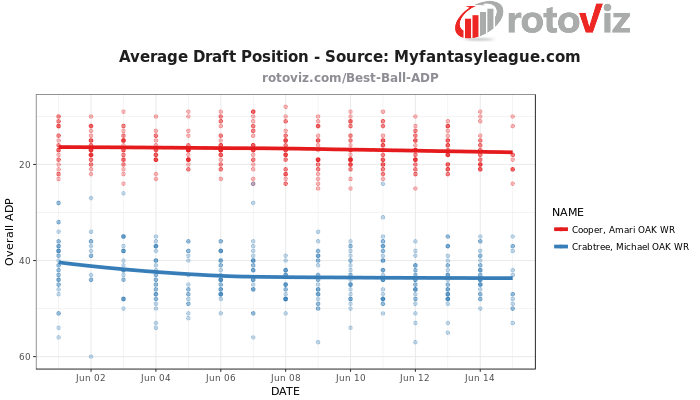 Compared to last year, Cooper’s ADP has fallen slightly while Crabtree’s has gone up rather significantly. Crabtree will be 30 years old during Week 1 of the 2017 season while Cooper is about to turn 23. While 30-year-old wide receivers are likely to descend from their peak, 23-year-olds like Cooper are likely to improve statistically.

Crabtree may be the safer pick as a proven target hog with the cheaper price tag, but fantasy football is about looking forward, not backward. Considering Cooper’s age-adjusted production, proven floor and sky-high ceiling, I believe he is worthy of his ADP and that this is the year Crabtree takes a backseat to the young superstar.