After writing The Peak Age for an NFL Running Back, I became intrigued with how age affects running backs and how predictable the drop-off is for them. In addition, I have recently become fascinated by data analysis programming languages, such as Python and R. The intersection of these two interests led to an attempt to create a predictive model using running back age and PPR scoring.

To win fantasy football championships, we are all attempting to identify quality or peak running back seasons — difference-making players we can rely on to start each week. Over the past two seasons, the RB10 has averaged 230 PPR fantasy points, which amounts to 14.4 fantasy points per game.

In my short education in machine learning, I have learned the following: First and foremost, you must build and teach a model with a training set. Then, to analyze the accuracy of the model, some observations must be set aside to test the model.

Based on the type of data being analyzed, the two best algorithms appear to be Kernel SVM and Naïve Bayes. We’ll start with the Kernel SVM.

Note that there are far fewer points on the right side of the graph — 83.8 percent of the seasons took place before age 29. Once you include the age-29 seasons, it accounts for 203 of the 223 seasons — 90.6 percent. It is hard to just make this prestigious list at 28 years old, let alone succeeding in the following age-29 season.

This is the training model, so we will see how the model fares in predicting the remaining 44 observations shortly. The conclusion we can draw so far is the model doesn’t like the older, low-scoring seasons. The drop-off seems to take effect around age 27 for low scoring seasons. By age 29, a running back’s play looks likely to fall off. 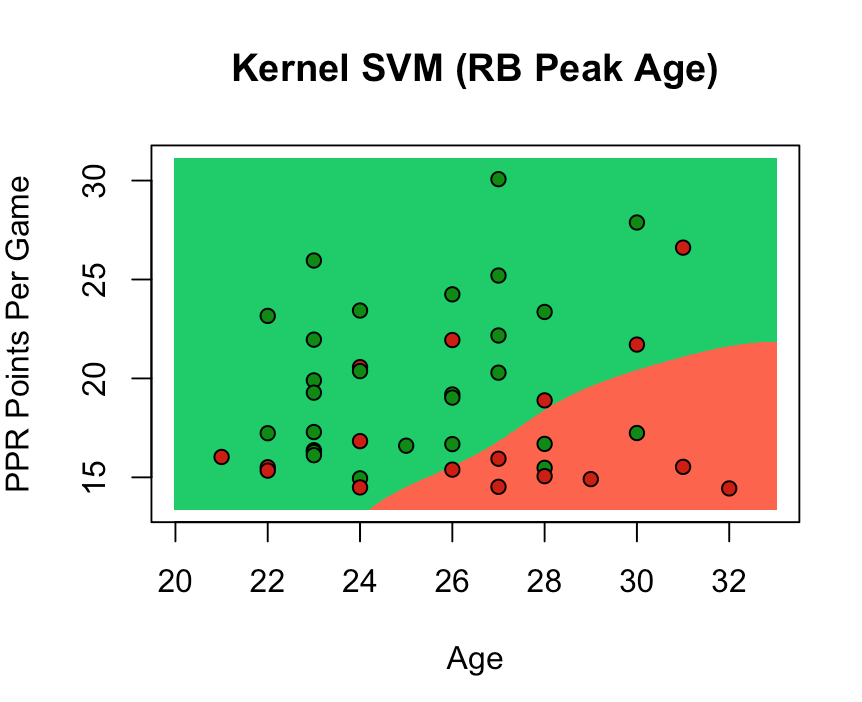 Out of 44 total observations, the Kernel SVM model predicted 31 correctly, which is an accuracy rate of 70.5 percent. While there are some incorrect predictions on the boundary, the model does a decent job at predicting the drop-off.

For the Naïve Bayes model, I used 56 observations to test the model or 25 percent of the seasons. 167 observations were used to train the model.

The Naïve Bayes algorithm returns a similar result – as the curve appears to follow to the same line. Let’s check the results of the Naïve Bayes model test.

Out of 56 total observations, the Naïve Bayes model predicted 42 correctly which is an accuracy rate of 75 percent. It was a little more accurate than the Kernel SVM model.

The model does not like older running backs who are coming off low scoring seasons.

Heading into last season, there were nine players who matched the peak criteria. Only three – Carlos Hyde, Mark Ingram, and LeSean McCoy were over 25 years old and considered unlikely to maintain their pace. All three did not maintain the 14.4 fantasy points per game pace and underperformed according to their average draft position.

During the 2019 season, David Johnson will turn 28 years old and scored just 15.5 fantasy points per game in 2018. Obviously, Johnson should be in a much better situation to succeed with Kliff Kingsbury coming to town, but the model does not like his outlook this season.

James White is 27 years old and doesn’t receive as many touches as the other players on this list. Sharing touches with Sony Michel and Rex Burkhead will make it tough for White to continue to produce like an RB1. One silver lining is his production with Rob Gronkowski out.

While Melvin Gordon will be 26 this year, averaging 23 PPR fantasy points per game lands him in the green according to both models. As a workhorse on a good offense, Gordon is currently coming off the board in the middle of the first round.