With the Rams releasing Todd Gurley, Darrell Henderson’s average draft position (ADP) is quickly rising. Is he worth selecting at his new price?

Obviously, ADP is always changing but per RotoViz, Henderson is currently being selected in the 7th round as RB36. At that price, he’s a bargain and potential league winner.

Darrell Henderson broke out as a sophomore in college, rushing 130 times for 1,154 yards and nine touchdowns. That’s an unfathomable 8.9 yards per carry.

He followed that up with a historic junior season, rushing 214 times for 1,909 yards and 22 touchdowns. Somehow, for the second straight season, he ran for 8.9 yards per carry.

Below is a list of running backs who have topped 1,500 rushing yards, 7 yards per carry, and 10 rushing touchdowns in a college season. 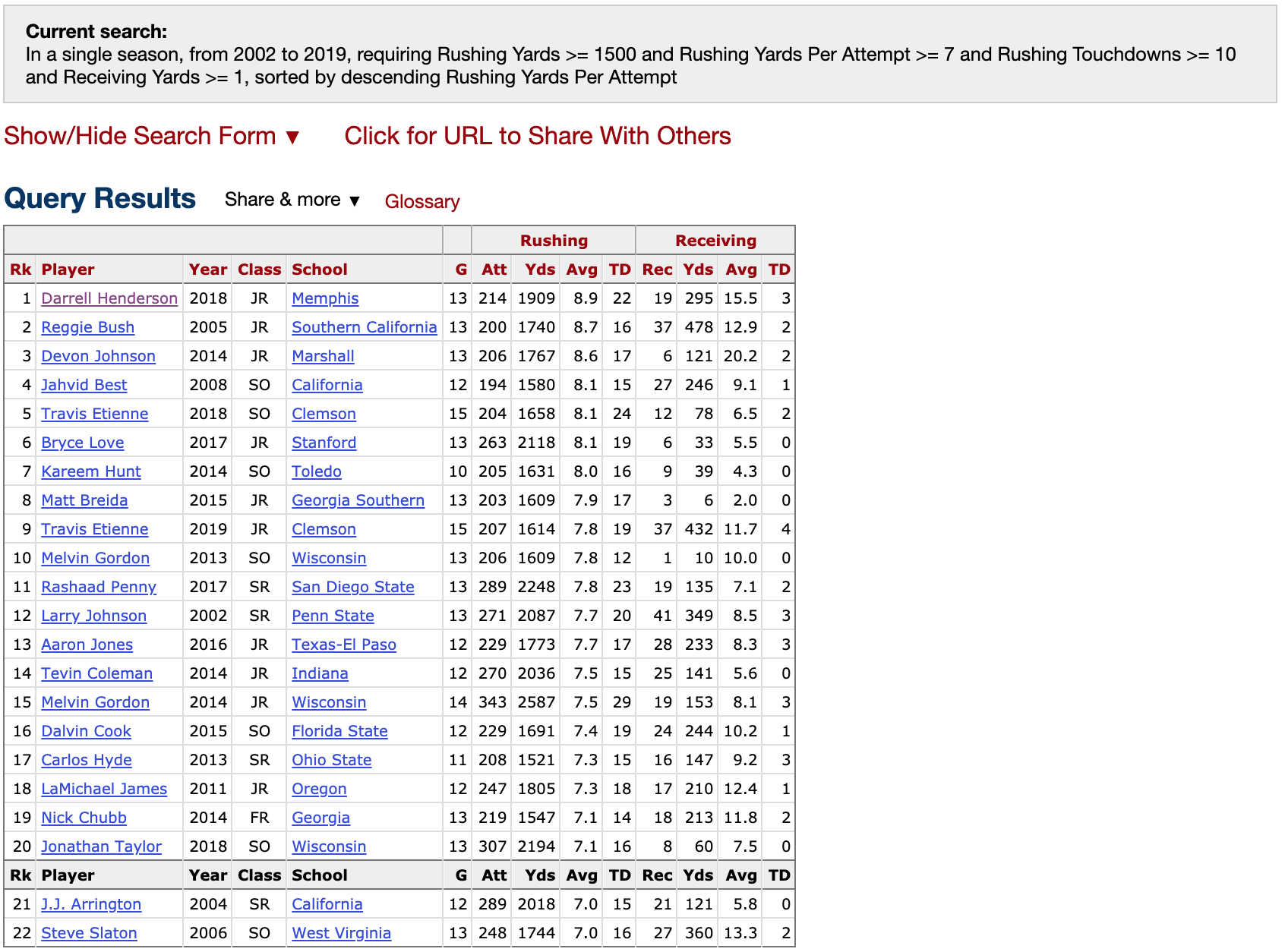 For Henderson’s college career, he AVERAGED 8.2 yards per carry and 12 yards per reception. He also scored 44 touchdowns in 38 games. It’s not a stretch to call Henderson the most efficient college running back ever.

If you follow fantasy closely, you remember the hype for Henderson last offseason. Many owners selected him with valuable draft capital and after five weeks, he had just one carry.

In Week 6, Henderson had his best game of the season. Here are the highlights.

Henderson showed an ability to make tacklers miss – an ability that showed up in advanced metrics.

Gurley and Brown had more cumulative evaded tackles due to much more playing time, but Henderson led the group in evaded tackles per carry and yards created per carry. The latter is a measure of yards gained beyond what was blocked.

Juke rate is a statistic used by Player Profiler to isolate a running back’s on-field elusiveness and tackle-breaking ability. Despite a small sample size, Henderson was among the league’s best in both yards created per carry and juke rate.

The Rams currently have Henderson, Brown, and John Kelly on their roster.

Kelly received just three carries last season. He was waived on November 16th and cleared waivers, so the Rams resigned him to their practice squad. Despite flashing in past preseason games, Kelly doesn’t appear to be a serious threat for touches.

Brown received more carries than Henderson last season but how has he produced the rest of his career?

Brown will enter 2020 as a 27-year-old running back. Aside from the age concerns, Brown has played in 54 regular-season games and has fewer than 1,000 yards from scrimmage. 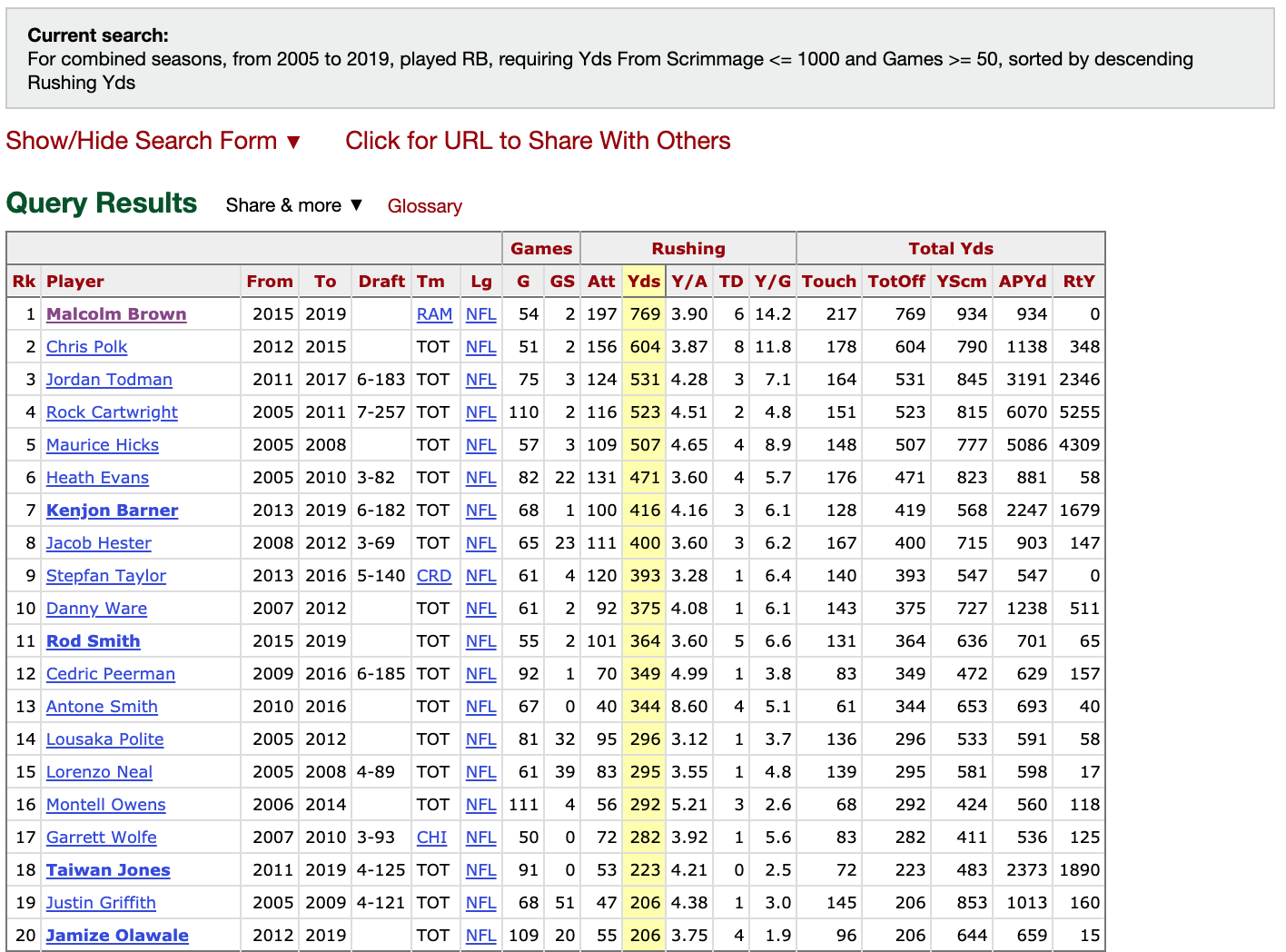 The full list is here. It does not include any players who are fantasy relevant or shed a positive light on Brown’s 2020 outlook.

While Brown went undrafted, Henderson was selected 70th overall in the 2019 NFL draft. Out of the running backs, he was selected behind just Josh Jacobs and Miles Sanders.

Per the Adam Schefter Podcast, “Sean McVay thought (Henderson) was the most dangerous offensive player in the draft.”

If that isn’t enough to convince you, Dalton wrote how to increase your odds of landing an RB1 using college production. Henderson meets the requisite criteria to have an 85 percent chance of scoring 200+ PPR fantasy points in at least one season.