After finding that if a player finished as a WR1 with under eight YPT that he was likely to decline in the following season, I wanted to research the opposite. How receivers performed after finishing a WR1 season with eight or more YPT. Would we see as large of a decrease in fantasy points in their following season?

At first glance, the list is overwhelming as 151 players fit the criteria versus only 41 who were under eight YPT. Naturally, this makes sense as most WR1 seasons happen by players who have good seasons and are efficient.

I sure hope you skimmed through that list as I did. 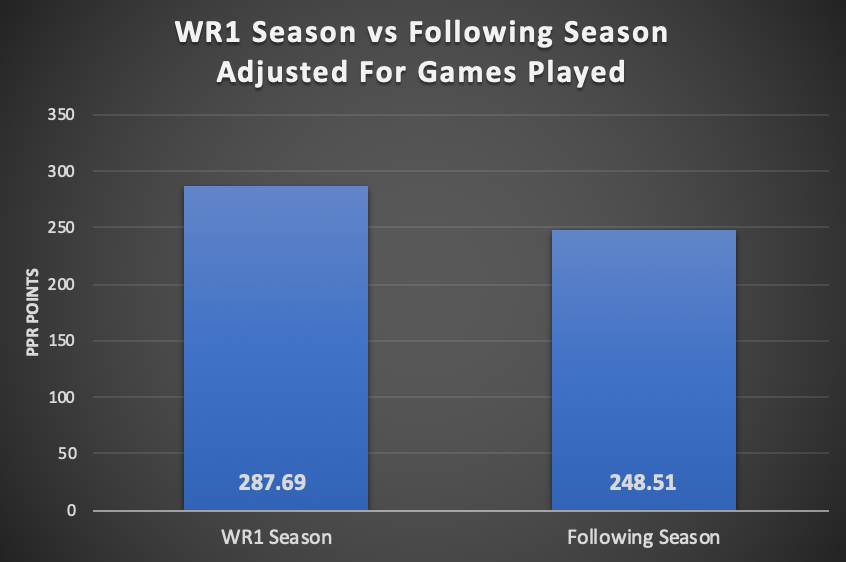 At first glance, we see that regardless of how efficient you were, if you finished as a WR1 you were more likely than not to decline the following season. This makes intuitive sense – if you climb to the top of your position the only way to go from there is down.

We see a slight increase in WR1s the following season from this cohort, but nothing substantial or actionable. 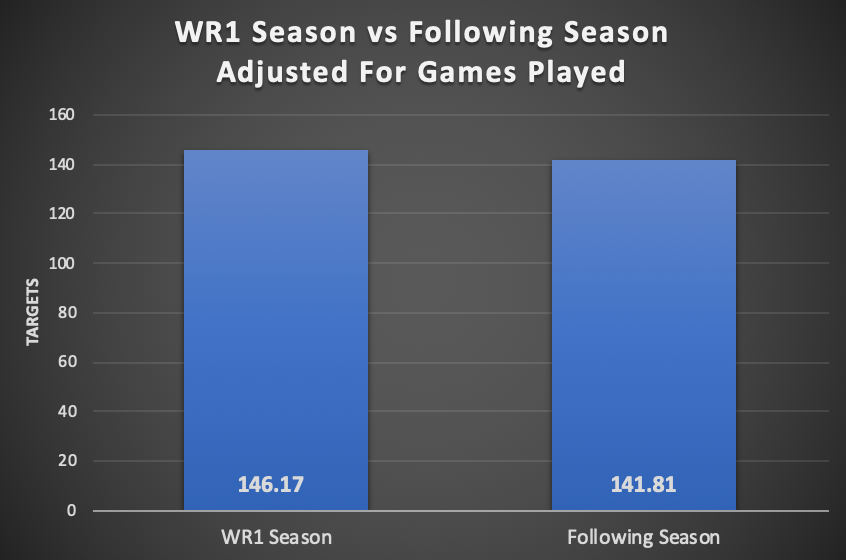 Let’s start diving in a little more to see if there is something hidden we can find between these differentiating WR1 seasons. What happens if we increase the efficiency threshold to nine YPT for these WR1 seasons to see if we can start to get a higher probability for following season production?

Increasing the efficiency to nine yards per target drops our sample size down to 88 players.

With a last-ditch effort to see if we can find any use for YPT to help predict the following season, let’s try and see how their age affects this.

Players who were younger still saw a solid decrease in fantasy points the following year, but overall slightly more fantasy points than the original group with only a 32.6 point reduction in points.

What these numbers tell us is that while the overall average decline is fairly large, we see that a decent amount of these players were still able to manage WR1 seasons the following year. This falls in line with Mike’s study on the decline of WRs at their age-30 season.

While it’s a risky bet to draft a WR1 who is age 30 or older, it’s a safer bet to draft the receiver who had a YPT over eight the year prior. This YPT study really helps to illustrate the age curve of WRs and why we should be avoiding WR1s who are 30 years old or older – especially the ones coming off a season under eight YPT.

It also helps to show us that efficiency really doesn’t matter for predicting the following season performance for WR1s and how hard it really is for these players to maintain WR1 status year in and year out.

Here is the full list of players to qualify as a WR1 according to the study.

We touched on Julian Edelman, Allen Robinson, and DeAndre Hopkins in Part 1.

The remaining players are all guys we should be considering to sell high in dynasty except for Chris Godwin due to his young age. Knowing that most of these players are going to decline in fantasy points next year, this is a good time as any to capitalize on that peak value and sell. Remember, receivers generally start declining after turning 27 years old.

Thanks for reading along and I hope that you learned something new in this article. My goal was to try and find an edge in efficiency, but this just reaffirmed my beliefs in the age curve for receivers as well as understanding the true volatility of the WR1.

Thanks to RotoViz for the awesome tools they have that allowed all this research to get done.