Kelvin Benjamin enjoyed a breakout rookie year, finishing as a top-15 wide receiver in 2014. Until he tore his ACL before the season last year, he was often being drafted in the 3rd round of redraft leagues.

Curiously, he is still going in the third round of drafts here in 2016 according to MFL10 ADP. I’m here to tell you that’s unbelievably ridiculous, considering the other receivers going around him. Let’s dive into the data!

Is He Better Than The Other Receivers Being Drafted Around Him?

The data is pretty telling. Benjamin did receive 145 targets his rookie year, but he was inefficient when compared to his contemporaries. Benjamin’s fantasy points per target couldn’t even beat out Randall Cobb’s relatively disastrous 2015 season.

According to the data, Benjamin needs a healthy flow of targets to keep up. But that is far from a given in 2016- the Panthers made the Super Bowl while passing the 6th least in the NFL. They probably aren’t going to change that formula too much.

With Devin Funchess rising (more on this in a moment) and Greg Olsen still the clear number one option, I highly doubt Benjamin sees 145 targets again. Using the fabulous Rotoviz AYA measurement (adjusted yards per attempt), Cam Newton wasn’t efficient when throwing to Benjamin. The others in the table are all over a full yard ahead of Benjamin.

Is He As Strong Of A Prospect As His Peers?

One argument for Benjamin is that he’s young, and this will only be his second year playing in the league. He’s bound to get better, right? Let’s use Rotoviz once again to compare him athletically and as a prospect to the other receivers going around him: 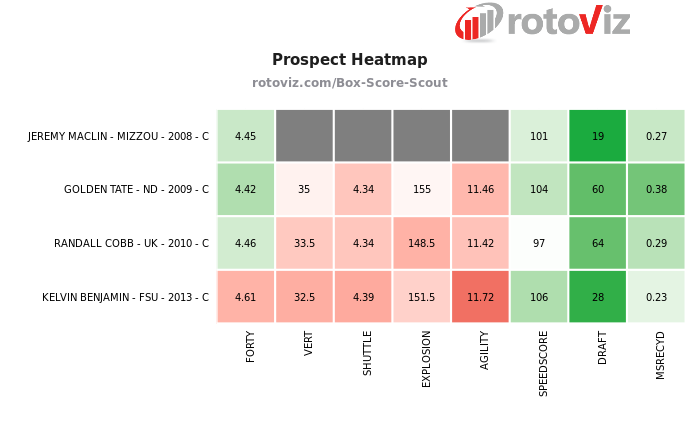 Another swing and a miss for Benjamin. While not all of Maclin’s data is available (I also didn’t use Edelman because he was a QB in college), he only finishes tops in his Speed Score. This is all due to his massive 6’5″ frame, which admittedly cannot be discounted. But as an athlete and in terms of college production, he is clearly not better than the others and is pretty clearly worse in many ways.

Is He Even Better Than Devin Funchess?

Last year, the Panthers spent a second round pick on a similar looking player to Benjamin- a tall wide receiver named Devin Funchess out of Michigan. While Funchess didn’t enjoy the rookie success that Benjamin did, he began to flash at the end of 2015 and will see heavy snaps at wideout for the Panthers this season. When discussing such a run-heavy, defensive team, targets are going to be at a premium. At best, Funchess or Benjamin will be the 1B to Greg Olsen. But is Benjamin better than Funchess?

Let’s see what our friends at PlayerProfiler.com think.

The only thing Benjamin beats Funchess at is his height-adjusted speed score, again due to Benajmin’s 6’5″ frame. But Funchess is 6’4″ himself, and blows Benjamin out of the water in every other measurable. Benjamin is a far inferior athlete to Funchess, and Funchess’ college production dwarfs Benjamin’s.

How can we draft Benjamin above proven studs when he may not even be the best wide receiver on a run-heavy team where the tight end is the top option? Perhaps it’s smarter to take the more risk-adverse route and take Devin Funchess in the 12th round.