This year I’ve seen drafters bypass Le’Veon Bell for Todd Gurley or Ezekiel Elliot too frequently, and I’m here to talk you out of that. Not only is Le’Veon Bell 2016’s top running back, he’s also in play for 2016’s top overall player regardless of position.

First, let’s start by removing his last game because he was injured early in the 2nd quarter. Simply by doing that, Bell’s points per game jumps to 20.68 – good for second, behind just Devonta Freeman. Here’s a look at Bell’s stats for the last two seasons.

Once we remove the injury game, Bell’s 2015 vastly improves. His season-long issue however, was pass game production. 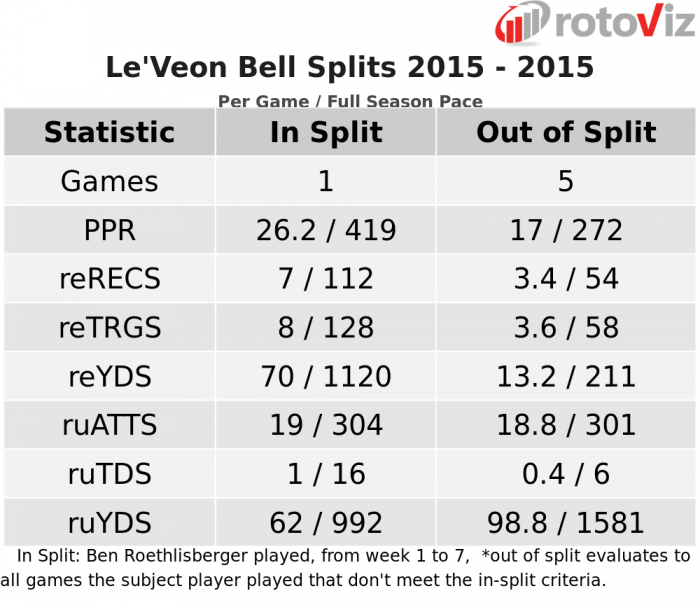 RotoViz’s Game Splits App helps us determine that Bell was clearly still involved in the pass game. Bell was phenomenal in his one game with Big Ben, who is ready to rock for 2016.

Now that we’ve proved that Bell was basically the same player in 2015 as he was in his league-winning 2014– let’s examine his outlook for 2016. It’s clear that Big Ben is a boost to Bell, but how much of a boost is he to the Steelers’ offense in general? 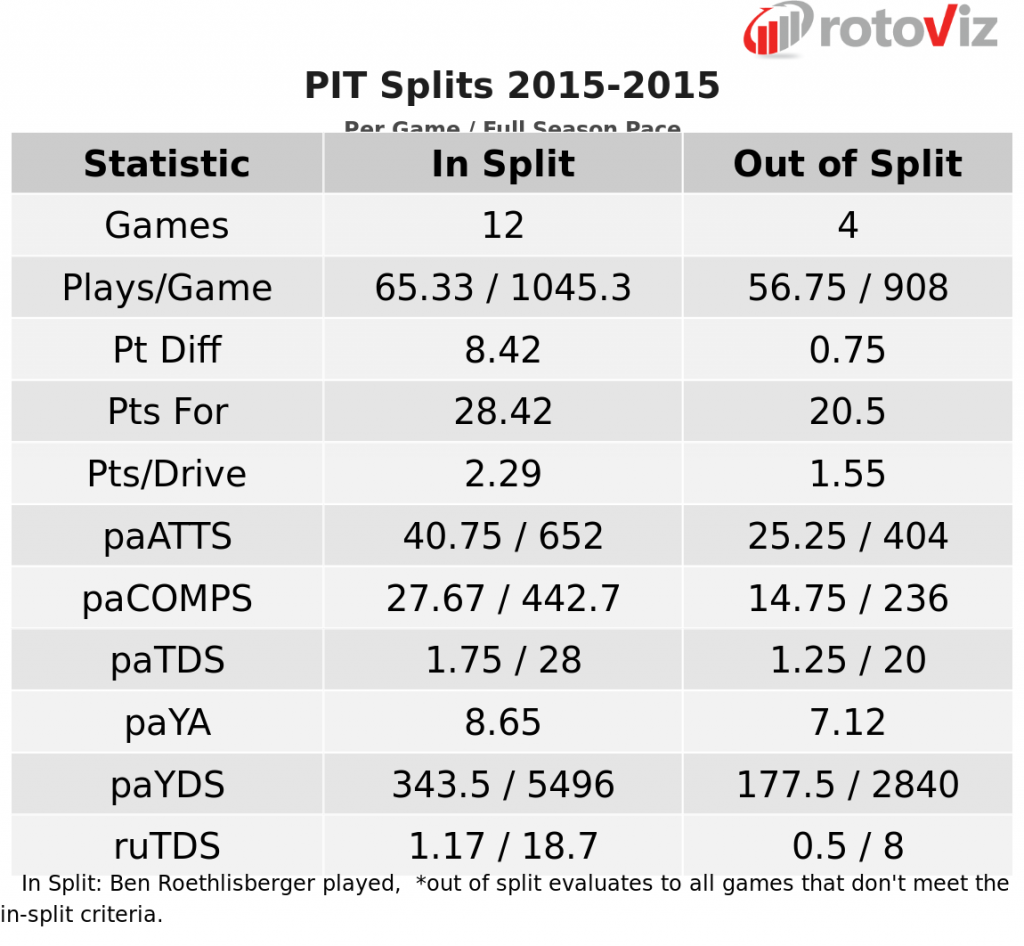 The Steelers score almost eight more points per game with Roethlisberger at quarterback. They also run almost 9 more plays, pass 15 more times, pass for 166 more yards, and rush for over double the touchdowns. Obviously there are more fantasy points to go around with Big Ben playing, which bodes well for Bell. With Martavis Bryant suspended, should we expect Bell to be featured more frequently?

Behind Bryant and Antonio Brown, Bell has been Roethlisberger’s most consistently efficient option. He’ll be featured heavily with Bryant suspended.

Let’s compare Bell to Todd Gurley, who is second in average draft position out of running backs.

While Gurley has scored more rushing touchdowns per game than Bell, he was out-played in all other facets of the game. Considering the Steelers scored 423 points in 2015 – compared to the Rams’ 280, it’ll be hard for Gurley to hold up that end of the bargain. Even during Bell’s dip in receiving production last season, he averaged over two receptions more than Gurley per game.

Many are concerned about Bell’s MCL and PCL injuries heading into 2015 – I wouldn’t shy away for those reasons. If Bell wasn’t healthy, would he really be playing pick-up basketball games?

I’m no doctor, but he looks healthy to me.

While many want to find reasons to pass Le’Veon Bell, he is surely 2016’s top running back and potentially 2016’s top player. Take advantage of the recency bias that plagues many fantasy owners’ minds and draft Bell confidently in the first round of drafts this summer.