With options like Kyler Murray, Josh Allen, and Lamar Jackson, it’s becoming harder than ever to avoid drafting a quarterback early. The ‘Points Above Average’ metric from my projections provide evidence as to why their selections are justified. Despite this, I’m still waiting to draft a quarterback in season-long non-best ball leagues. Why? Because I’m drafting Trey Lance instead.

Let’s begin by explaining that I believe the impact of coaching is overstated in fantasy football analysis. Coaches make an impact, but dominant football players like Calvin Johnson or A.J. Brown will likely dominate anywhere.

Regardless of the variability of the impact, Kyle Shanahan is a fun coach to have on your side. One of the brightest offensive minds in recent NFL history, below is Shanahan’s coaching history.

Starting in Houston, Shanahan turned the likes of Matt Schaub into an elite passer, finishing Top-5 in yards in back-to-back seasons. He coaxed the best statistical season out of Schaub in 2009, when he passed for a league-leading 4,770 yards and 29 passing touchdowns.

In Washington, Shanahan produced after landing Robert Griffin III. The Redskins led the league in rushing, while RG3 ran for 815 yards and seven touchdowns in 15 games. Griffin averaged 8.6 adjusted yards per pass attempt and finished as the QB5 in per-game scoring – not bad for a rookie quarterback.

Obviously, RGIII got hurt and Shanahan moved on, eventually landing in Atlanta. Shanahan again coaxed the best statistical season and an MVP campaign out of Matt Ryan, where he finished as the QB3. Ryan led the league in QB rating and adjusted yards per attempt (10.1!). He threw for a career-high 38 passing touchdowns compared to a career-low seven interceptions.

That landed Shanahan a head coaching gig for the 49ers. Obviously, the 49ers had a stunning 2019 Super Bowl run when they finished second in the league in scoring. They have been a different team when their starting quarterback, Jimmy Garoppolo is on the field. 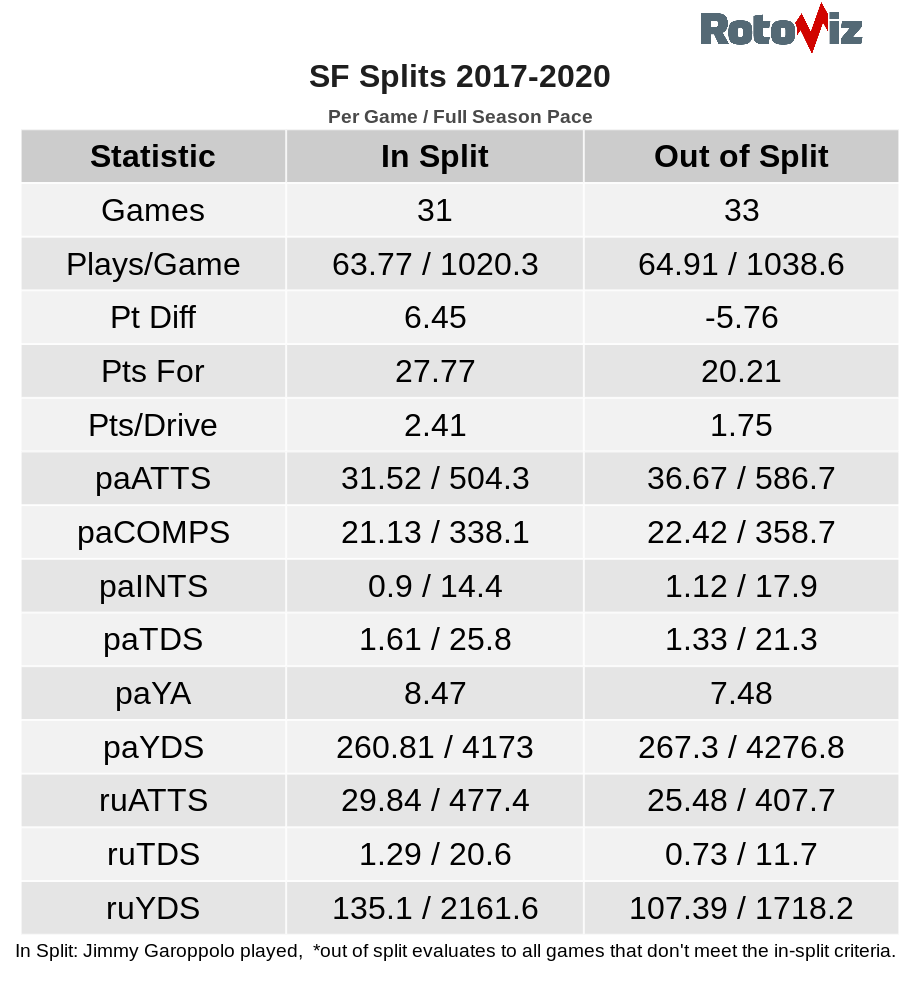 Over his four years with the team, the 49ers have averaged 7.56 more points per game when Garappolo is on the field. It’s easy to see his large impact on the running game, in terms of points per drive, and efficiency. The 49ers have suffered when Jimmy G is off the field.

With concerns mounting, the 49ers traded up to select Trey Lance with the third pick of the NFL Draft.

Lance’s lack of competition is noteworthy, but he dominated at a masterful level during his one full season at North Dakota State. In 16 games, Lance threw for 2,786 yards (9.7 yards per attempt), 28 touchdowns, and zero interceptions. He added 1,100 rushing yards and 14 rushing touchdowns.

It’s clear based on the selection the 49ers are enamored with Trey Lance. They spent significant draft capital and selected him over stud prospect Justin Fields. Shanahan had the following to say about Lance:

“His natural ability to play the quarterback position, just in terms of how he plays in the pocket, how he can go through the progressions, how, when no one’s open, that he gives it a chance, that he recognizes it. And how quick he reacts to turning it into an off-schedule play. He plays on tape like he’s a very poised, smart person who’s been playing the position for a while.

Then you look into the other attributes, and you’re like “Oh, I haven’t even gotten to the running skill set.” I haven’t gotten to the upside of how much better he can get, the more he plays. That’s what made me like him so much right away.”

In today’s fantasy football market, it’s extremely beneficial to draft a quarterback with rushing ability. Guys like Lamar Jackson add so much value with their legs that they don’t need to pass well consistently to produce.

For instance, Jalen Hurts largely struggled as a passer, averaging only 6.8 adjusted yards per attempt. He threw for just five touchdowns in four games, but his 12 rushing attempts per game landed Hurts in the Top-5 fantasy QBs per game.

Trey Lance’s ability to rush and potentially add goal-line carries is an enormous boost to his fantasy value.

We’ve talked about Shanahan, Trey Lance as a prospect, and the enormous boost of the “Konami Code” but we haven’t discussed the 49ers pass catchers. Shanahan has coached some excellent teams, but this group of pass-catchers is likely the best he’s ever had.

A bonafide superstar, George Kittle shouldn’t need an introduction. He broke the all-time tight end receiving yard record as a sophomore. He has averaged 80.6 receiving yards per game over the past three years despite playing through various injuries. Over that span, Kittle has averaged a stellar 10 yards per target.

Despite suffering a Jones fracture during the 2020 preseason, Deebo Samuel has proven himself as an excellent receiver. Combining second-round draft capital and superb early production through his first two seasons, Samuel returns extremely impressive comparable players.

Not to be outdone, Brandon Aiyuk was arguably the most impressive of the bunch last season. Finishing as the WR19 in points per game, Aiyuk outproduced impressive sophomores Terry McLaurin and Diontae Johnson. Like Samuel, his rookie year production and draft capital make him an extraordinary young player. WR guru Matt Harmon agrees:

After charting the WRs from the 2020 draft class for #ReceptionPerception, this was my biggest riser.https://t.co/f6oIqFSrSj

The issue for all of these pass-catchers is clearly not talent, but the fact that there are going to be limited targets to go around in this offense. In fact, we could even see a reduction in pass attempts due to Lance’s rushing ability.

With Lance, it’s hard to know how frequently the 49ers will pass. Here’s what we know: over the past four years, Shanahan’s 49ers have averaged 546.8 pass attempts. When he was the offensive coordinator with a rookie RGIII, the Redskins passed 442 times. If you average the two of those, you get 494 pass attempts – which is similar to Cam Newton’s Carolina Panthers average of 486 pass attempts per season. For reference’s sake, that would have ranked 29th in the NFL last season.

The reduction of pass attempts would hurt the pass-catchers volume, but it means more rushing attempts and fantasy points for Lance. Lance largely comes without risk: while he may not be an excellent NFL quarterback yet (or possibly ever), the 49ers will be giving their first-round draft pick at least a year of starts.

With the talent around him, it’s hard to not expect Trey Lance to produce at an elite level as a rookie. While we’re not certain of the volume that he will have as a passer, it doesn’t matter for Lance: he’s going to produce at a high level either way due to his rushing ability. His potential outcomes include elite QB1 seasons.

We cannot be sure of when Lance will start, but historically Top-10 quarterback selections average 12 starts as rookies. At a position where you can manufacture production early in the season, Lance is the player that you want starting for your fantasy team at the end of the season. There may not be a more obvious league winner in 2021.

I have my doubts about him throwing on the run with that wind up throwing motion he has. That flaw could get him hurt when he leaves the pocket. Even though it is a fairly quick motion, NFL linebackers and cornerbacks anticipate naturally.