Home / Fantasy Football Studies / Draft Him, Not Him: Part 1

Oftentimes on draft day, we divide players into “tiers”. Theoretically, you select one of those players in the tier, and your team is set.

However, we sometimes use ADP (average draft position) to determine these tiers. I am here to tell you that ADP lies, and the choices within these ADP tiers are much more nuanced than one might think.

Simply put: players at similar ADPs are not created equal. I am going to go over some players at the same position with similar ADPs who, in my opinion, are not of the same caliber. This will be Part 1 of a multi-part series. 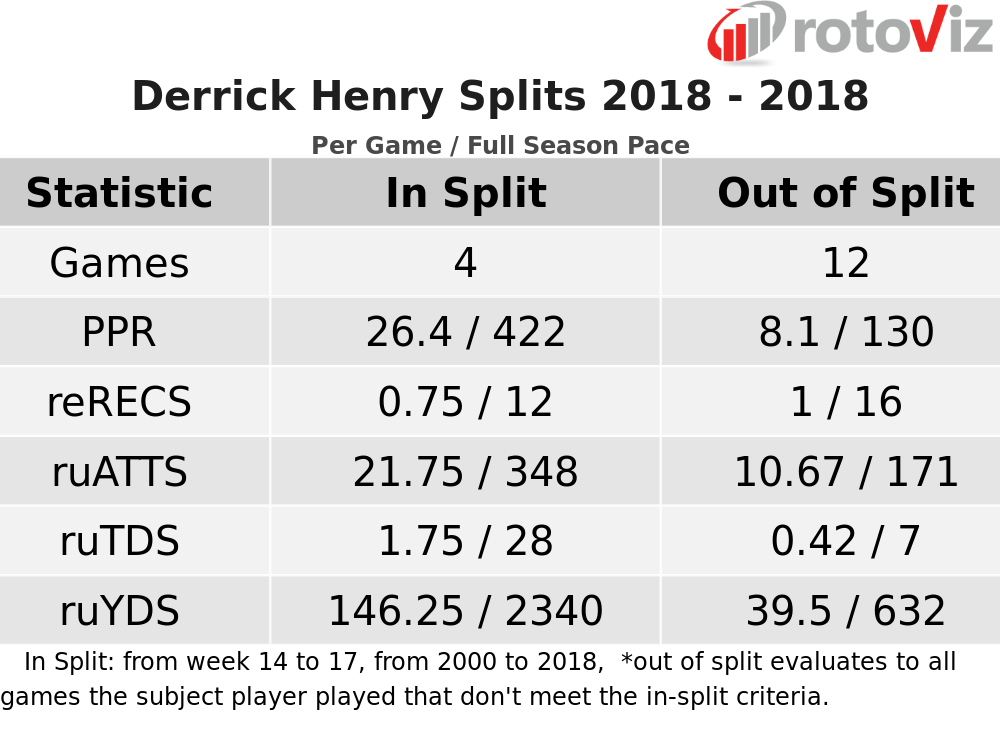 However, the numbers above are covered in red flags. Odds are, if you drafted Henry at his 4th round ADP last year, you didn’t make the playoffs while he was averaging under 40 yards, half a touchdown, and one reception per game and thus didn’t benefit from his late-season explosion. He was even dropped in many Apex leagues.

Since 2013 only two RBs have finished in the top 18 in PPR leagues while catching 15 or fewer passes: Derrick Henry (2018) and LeGarrette Blount (2016). In other words, the odds of Henry living up to his ADP are slim to none. With the Titans set to continue their ground-and-pound attack and Dion Lewis to vacuum up the very limited amount of RB targets, 15 should probably be Henry’s over/under reception total for the season.

Meanwhile, Devonta Freeman is looking like himself again and is going to monopolize backfield touches in an offense that will threaten to lead the league in points. He has proven to be an asset in the passing game and will no longer have to cede work to the pesky Tevin Coleman.

I see the Henry vs. Freeman debate as the most lopsided of the 2019 ADP. Take the player who catches passes, has a history of production, and plays on the superior offense.

Similar to Henry vs. Freeman, this is another example of extremely close ADPs with very different values. Our fearless leader Michael Braude has already written why Boyd is an absolute steal at his ADP. Despite missing two games, Boyd finished as the WR17 and was actually better when AJ Green was on the field. Boyd averaged 15.8 fantasy points per game on nearly 8 targets, while Jeffrey averaged 14.2 on 7 targets.

Their ceilings and career trajectories are also headed in opposite directions. After dominating in college, Boyd finally broke out last year – and rarely do young, productive college dominators flop after they’ve broken out.

I highly recommend reading Braude’s article (linked above), as he pounds the table for Boyd far more effectively than I can.

Jeffery, on the other hand, is going to be 30 in February and already has a laundry list of injuries to contend with. He was already losing targets to alpha Zach Ertz, and will have to contend with the likes of a much-hyped Dallas Goedert, DeSean Jackson, and even Nelson Agholor, J.J. Arcega-Whiteside, and a loaded backfield. He last eclipsed 850 yards back all the way back in 2014 with the Bears and is unlikely to ever be a volume chain-mover again.

Drafting Alshon Jeffery means you are drafting off of glory days long past while drafting Boyd means you are projecting to the future. But remember, Boyd outscored Jeffery per game last season.

This is the kind of move and attitude that differentiates the fighting-for-a-playoff-spot owners and the owners sitting comfortably in position to grab a bye.