Home / Fantasy Football Studies / Draft Him, Not Him Part I

Draft Him, Not Him Part I

Every fantasy draft, I look at the later-round selections and ask myself “Why? Why would you take someone you KNOW will do nothing over an unknown who has an outside shot of helping you win a championship?”. Now, when those players are against me, I quite enjoy it. Give me all the upside fliers. But I’ll be nice enough to share with you my philosophies in this multi-part piece about later-round selections.

Two themes here: 1. Most of these situations are taking hyped-upside guys over mediocre or over-the-hill players with pretty much no chance to contribute. 2. We want guys who will become a bona fide starter with just one injury, not continue in a timeshare. Without further ado:

DeAngelo Williams has had a nice run, but we know who he is by now. Even with Stewart missing significant time the past few seasons, Williams hasn’t managed to top 843 rushing yards since 2009- do we expect that to improve in his age 31 season? His rushing TDs have dropped from 7 to 5 to 3 the past three seasons, and with Cam Newton and Mike Tolbert still around those totals are not going to rise.

As evidenced by the table below from the RotoViz Game Splits App, Williams’ stats are pretty dreadful when Stewart plays. Even if a now-healthy Stewart misses significant time again, you’re likely signing up for a ceiling of 850 yards and 5 touchdowns. You can do better. 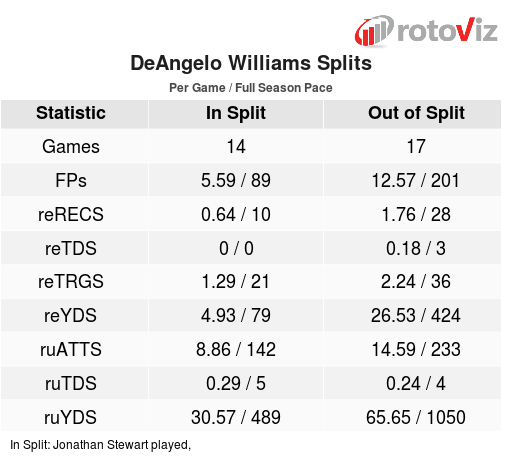 Instead, aim for Christine Michael in the same round. Michael is a franchise-caliber running talent, and coaches have already hinted at a time share between him and Marshawn Lynch. Lynch is 28 years old, but a rather old 28 as he has averaged 300 carries over the past three seasons. You want bench players who can become starting studs with a big workload if someone gets hurt. Michael fits the bill and more.

I’ve written about Andy Dalton as almost a lock for regression, and I haven’t changed my mind since then. Last year was Dalton’s first passing for over 3,700 yards, and with pass-happy Jay Gruden leaving town that number is likely to regress to his mean. Enter run-heavy, ball control oriented coach Hue Jackson and second-round pick Jeremy Hill- Dalton has likely seen his biggest passing volume in a long, long time. The Bengals admitted as much, as they are trying to copy the offenses of the two run heaviest teams in football- the 49ers and Seahawks.

Ben Roethlisberger is the preferred alternative. Every year, Big Ben delivers a solid yardage and touchdown total while limiting turnovers and producing borderline QB1 seasons. He won’t win you many games, but he’ll ensure you don’t lose them. A model of consistency, Big Ben as averaged under 17.1 fantasy points per game in a season ONCE since 2009. Dalton has thrown 49 interceptions in his three-year career- Roethlisberger has thrown 53…in the past six seasons combined. With Heath Miller healthy, Antonio Brown going strong, and long-awaited offensive line continuity, Ben should never go after Dalton in fantasy drafts.

Steve Smith had time in the sun, but he’s proven he’s past his prime and then some. Severely deteriorating the past three seasons, Smiff only put up a 64-745-4 statline as Cam Newton’s number one option last year- good enough for a WR42 finish in PPR leagues. If he can’t even sniff WR3 territory as a number one option, imagine what he’ll do as the 3rd option in the passing game. He’s already acknowledged he’ll play the Kevin Walter role in Gary Kubiak’s offense. To put that in perspective: Walter played in 109 out of a possible 112 games in Houston- he averaged a 47-583-3.5 line. There’s no real way Smiff makes a difference on your fantasy team.

Dobson is a huge question mark- unproven, injury problems, etc. But at least he has a chance to make a difference. If he can run with the starting X role in the Patriots’ offense (not a far-fetched possibility), he’ll likely come close to Brandon Lloyd’s 2012 line of 74-911-4. It’s not spectacular, but it is heads and shoulders above the realm of possibilities for Steve Smith.

Similar to the Steve Smith vs. Aaron Dobson debate, we are going with unproven upside over established mediocrity. It’s about time for fantasy owners to stop chasing the ghost with Kenny Britt. First of all, Britt was downright awful last year. He caught a mere 11 passes for 96 yards, and finished 109th out of a possible 111 receivers on Pro Football Focus’ wide receiver rankings. The Rams haven’t had a player with over 700 receiving yards since Torry Holt in 2008 (read that sentence again)- do we think a player who has never caught more than 45 passes in a season on a run-first team with a questionable quarterback is going to buck that trend? Didn’t think so.

There is almost a 0% chance Justin Hunter is a consistent contributor this year, but give me the explosive long-striding deep threat over proven ineffectiveness every time. Hunter flashed with two 100+ yard games in the last month and a half of 2013 as a rookie, and definitely has room to grow statistically and opportunity-wise.

Although both of these players are in three-headed backfields, only one of them was traded for a 4th (possibly 3rd) round pick this offseason. Hint: it wasn’t Mark Ingram. After being lauded as a possible bellcow since his rookie year, Ingram has turned that opportunity into a high of 156 carries in a season and 24 career receptions. Like DeAngelo Williams, we pretty much know who Mark Ingram is (at least with the Saints). Pierre Thomas is still there and Khiry Robinson is a force to be reckoned with. Even if Thomas does get hurt, it’s likely Robinson who benefits most- not Ingram.

The Bills were somewhat surprisingly desperate to acquire running backs this season, and they got their man from Philly in Bryce Brown. Brown has shown fumbling issues and a tendency to bounce every run outside, but he’s also shown an ability to take over a football game. The Bills have shown they know that C.J. Spiller is not a bellcow, and Fred Jackson is an astonishing 33 years old. Again, we want our backups to be guys who have a chance to be studly starters if someone gets hurt. While Ingram will likely never get 15+ carries a game no matter what, all it takes is one Fred Jackson injury for Bryce Brown to become a likely RB2. He should be your choice.