Home / Fantasy Football Studies / Who Should I Draft: Keenan Allen or Allen Robinson?

Who Should I Draft: Keenan Allen or Allen Robinson?

Two wide receivers with nearly identical ADPs, both coming off of lost seasons for a variety of reasons. Which one should you trust? 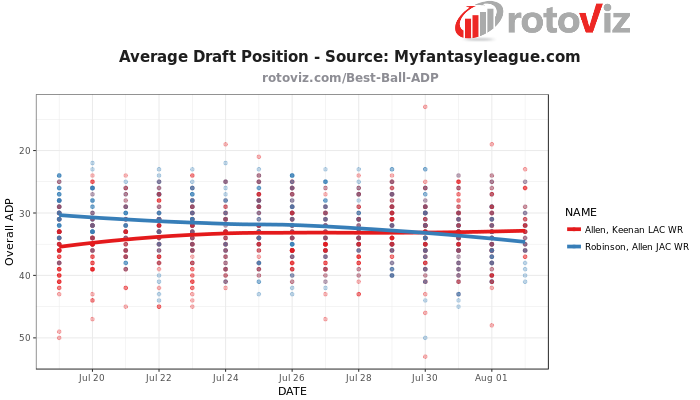 Although drafters have preferred Robinson up until recently, their ADP is so close that it is worth analyzing who is the better value. I’m going to do this a bit differently than my esteemed colleague Mike Braude and go category by category:

Allen Robinson has played a possible 42/48 games since entering the NFL, and hasn’t missed a game since his rookie year. Keenan Allen has only played a possible 38/64 games, and only nine total over the past two seasons combined. With a history of knee injuries including a torn ACL in the first game last season, clearly Allen is the bigger injury risk

Both of these players exhibited extraordinary abilities for being so young. Here is a table to illustrate just how special they are for their age:

As you can see, plenty of big names and promising careers on that list. Age-adjusted production is a huge indicator of a success, and both of these players have it in spades.

How much scoring has each player done throughout their career?

Robinson is both taller, heavier, and has more red zone looks per game and a much higher TD percentage than Allen. The Jaguars may run more in the red zone this year, but Robinson will still be their go-to guy in that area. Keenan Allen, meanwhile, has to contend with Hunter Henry, Antonio Gates, Tyrell Williams, and Melvin Gordon in the red zone. With a modest 11.8 yards per reception, Keenan Allen isn’t exactly a big play threat to score from deep either.

Robinson is much more of a deep play threat, as evidenced by his career 14 yards per catch and him leading the league in 20+ yard catches in 2015. But in the past two seasons combined, Robinson has turned 301 targets into only 153 receptions. Allen, on the other hand, has turned a career 322 targets into 221 receptions. Considering his route-running chops and lower average depth of target, Allen is a real threat to catch 100 balls while Robinson can barely turn 150 targets into 80 catches.

The fact that we are talking Philip Rivers vs. Blake Bortles should be enough to end this segment, but the fact is the Jaguars are going to make things even more difficult for Robinson by going run-heavy. This is obvious by their offseason moves (Fournette in the first round, offensive line investments in free agency and rest of the draft) and their coaches hoping (only half-joking) that they don’t want Bortles attempting a pass all season. Meanwhile, the Chargers should continue to be a balanced yet aggressive offense. Especially considering their annual offensive line woes, the quick-hitting passing offense is going to be their calling card. That happens to be Allen’s specialty.

This is different than injury issues – health allowing, how likely are these players to return value at their ADP?

Robinson has a scary range of outcomes. 2015 and 2016 looked similar on the surface: same amount of targets, same QB…but a WR6 vs a WR24 finish. Robinson had the fourth-most drops, had a pathetic 2.7 YAC per reception, and most troublingly created the least amount of yards per separation among receivers with 100+ targets. Throw in Bortles’ awful efficiency and mechanics, and you have a true wild-card on your hands.

Allen had a relatively miserable sophomore slump and has had some injuries since then, but he has shown a lot of promise recently. In 2015, he was on pace for an absurd 134/1,450/8 line on 178 targets through 8 games before lacerating his kidney. In his only 2016 game (he only played two quarters), he had 6 catches for 63 yards before going down close to halftime. With elite route-running chops, a competent offense and the trust of Philip Rivers, Allen has a much higher floor.

While it is abundantly clear that Allen Robinson has far superior touchdown potential and big-play ability, his 2016 proved his floor is much lower than many in the fantasy community imagined. Allen is fantastic when healthy, but can he play 14+ games for the first time since 2014? I believe who you select comes down to how much you weigh floor vs. ceiling, and of course injury risk. Allen’s floor is much higher, and 2015 proved he also has a high ceiling. Keenan Allen is my preferred selection.