Eight Rookie Running Backs That You Should Know for 2018

If you’re reading this article, it’s very likely that you already know about Saquon Barkley. Arguably the best running back prospect ever, Barkley dominated at Penn State. His college dominator rating (the percentage of a running back’s total team’s yards and touchdowns) was 32.2 percent (71st percentile). Barkley was very involved in the passing game with a target share of 14.8 percent (93rd percentile).

After being selected second overall in the 2018 NFL Draft, there’s little doubt that Barkley will be heavily involved. He’s already being selected, on average, in the first round of redraft leagues.

The most surprising pick of the first round of the 2018 NFL Draft may have been Rashaad Penny at 27th overall to the Seattle Seahawks. Penny dominated at San Diego State, accounting for 50.1 percent of his team’s total yards and touchdowns. He was also involved in the passing game, receiving 10.3 percent of his team’s targets.

Running a 4.46 forty at 220 lbs., Penny is very fast for his heavy size. He didn’t perform well in the jumping or benching metrics, but historically, fast and heavy running backs have been successful.

As a first-round pick, Penny is the frontrunner to be the Seahawks’ bell-cow so from a volume standpoint he’s in good shape. However, there are existing concerns: a perennially shaky offensive line, the Seahawks’ history of not targeting running backs in the passing game, and new offensive coordinator Brian Schottenheimer whom has shown very little creativity on offense.

Another surprising pick was the Patriots selecting Sony Michel in the first round. It’s surprising because the Patriots have a history of acquiring cheap running backs to fit their system. It seems as if they were set with Rex Burkhead, James White, Mike Gillislee, and Jeremy Hill, but clearly, they saw something special in Michel.

Sharing with rookie Nick Chubb at Georgia, Michel didn’t see the volume necessary to dominate in college – but he was electric when he was on the field. Michel ran for 6.7 yards per carry (88th percentile) and received 10.4 percent of the Georgia targets.

Like Alvin Kamara, Michel doesn’t profile as a superior athlete to his peers. However, per Graham Barfield’s Yards Created Series, Michel was a standout player. Michel forced at least one missed tackle on 45.6 percent of his carries and had a very high percentage of carries that gained at least five yards (39 percent).

Predicting the Patriots’ running back distribution is always difficult, but they’ve invested a lot in Michel. For fantasy leagues, he looks like a boom-or-bust selection with outcomes ranging from league winner to unreliable week-to-week consistency.

The Browns selected Nick Chubb with the third pick of the second round. Chubb was historically great in his freshman and sophomore seasons before shredding his knee in brutal fashion. He made a stunningly quick recovery to play as a junior and senior.

At Georgia, Chubb was impressive on the ground, breaking tackles at one of the nation’s highest rates. He wasn’t involved in the passing game but that may have more to do with Sony Michel than Chubb’s receiving ability.

Chubb was incredible at the combine, showcasing his top-notch athleticism. Per Player Profiler, here’s a chart of his workout metrics. 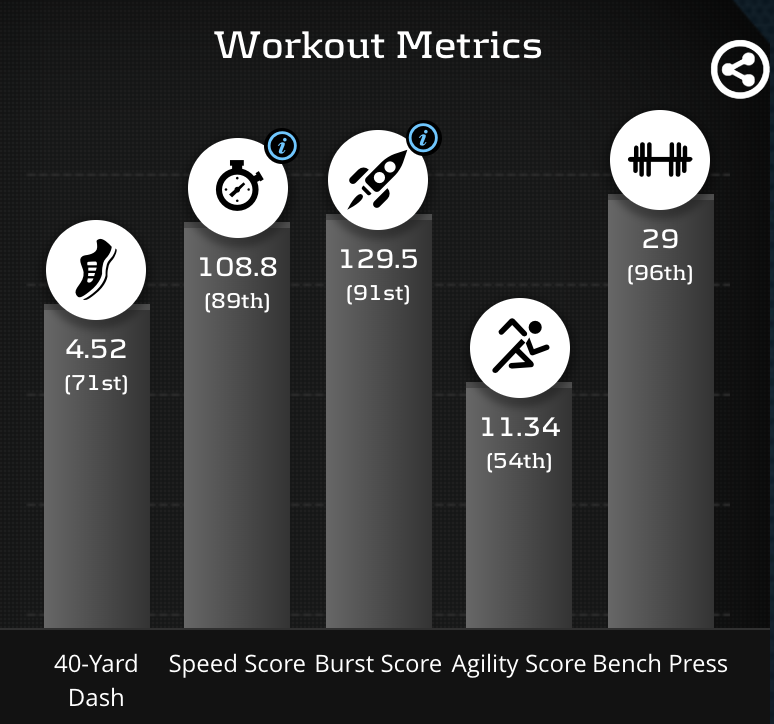 Chubb has all the tools necessary to have a big rookie year – his issue is opportunity. While recently extended Duke Johnson dominates in the passing game, Chubb will battle Carlos Hyde for early-down carries.

With the sixth pick of the second round, the Buccaneers selected Ronald Jones. While he’s only 205 lbs., Jones is the youngest rookie running back in the class – which is a very promising sign for the likelihood of his potential future success. His game relies on speed and Jones doubled as a track athlete at USC.

Jones’ college dominator rating of 33.4 percent (74 percentile) is promising. Although he wasn’t targeted frequently in the passing game, USC’s offense simply didn’t target the running back position much.

Jones enters a great opportunity on the Bucs. Charles Sims returned on a one-year deal but isn’t guaranteed to make the roster and Peyton Barber appears to be “just a guy”. There are no roadblocks to Jones having a voluminous rookie season.

The Detroit Lions selected Kerryon Johnson with the 11th pick of the second round. Johnson produced in college, accumulating a dominator rating of 36.4 percent (82nd percentile). Behind Ronald Jones, Johnson is the second youngest running back in the class which, again, is a good sign.

As an athlete, Johnson is somewhat average. He pairs average speed and size with great leaping ability. Johnson lacked explosiveness and didn’t create many missed tackles, but he did contribute in the passing game.

Heading into 2018, Johnson’s concern is limited opportunities. With new head coach Matt Patricia, the Lions signed early-down pounder LeGarrette Blount, who will likely receive goal-line carries. Theo Riddick remains the third-down back and has caught at least 53 passes in each of the last three seasons. Johnson will likely need an injury to one of those players or show that he’s a special player to have a breakout rookie season.

My favorite running back in this class is Derrius Guice. After a draft-day slide, the Redskins selected Guice with the 27th pick of the second round. Nine days younger than Kerryon Johnson, Guice is also a 21-year-old rookie.

At LSU, Guice racked up 32.2 percent of the team’s yards and touchdowns (71st percentile). An explosive, violent runner, Guice combined his 224 lb. frame with 4.49 speed. Despite facing stacked boxes on 73 percent of his carries, Guice still ran for 6.4 yards per carry (83rd percentile)at Georgia.

It’s unlikely that Guice will be too involved in the passing game with Chris Thompson around but he’s expected to start. Guice offers impressive early-down rushing ability in the form of an Ezekiel Elliott/Marshawn Lynch. Few deserve that type of lofty comparison but Guice warrants it.

With the seventh pick of the third round, the Denver Broncos selected Royce Freeman. Freeman had extremely productive freshman and sophomore seasons (combining for 38 touchdowns) before an injury-plagued junior year. He returned for an impressive senior season.

Freeman’s dominator rating and age would look better if he declared for the draft as a junior but he looks like a solid prospect nonetheless. Running a 4.54 forty at 229 lbs., Freeman has an 86th percentile speed score. His 11.06 agility score is also impressive.

John Elway expects Freeman to be the Broncos’ early-down starter. The tea leaves suggest the Broncos expect Devontae Booker to be their third-down back. While Booker has been decent in the passing game, he should not be viewed as a roadblock to Freeman’s potential success. If Freeman plays well, he’ll have the opportunity to be a league-winning selection.